“If we make it…… but… somehow got separated…. Let’s return to this spot.” – Jowy Atreides

The best ending in Suikoden II has a mixed response from fans. Requiring the player to have recruited all 108 Stars before heading to Rockaxe and having saved Nanami from certain death, this ending gives the original trio a surprisingly bittersweet conclusion.

Saving Nanami is no easy feat, as Riou must respond to Garudo’s inane statements about violence and the state of the nation. If the player taps the dialogue option fast enough to deflect the arrows from Garudo’s crossbow, there is a small, but significant chance that Nanami will not die at the end of the game. If the player is treated to a scene where Dr. Huan and Shu are discussing Nanami’s well-being, you know you’ve hit pay dirt.

My favourite part of this ending, however, happens when Riou heads to the Tenzan Path. At the beginning of the game, after Riou and his best friend Jowy escape a Highland Unicorn Youth Bridge Camp, the two meet at the top of the Tenzan Path, etching a cross amongst the stones next to a waterfall. The friends vow to each other that should they ever be separated or life takes an unexpected turn that they would meet at that exact spot once more. To escape, the boys jump into the falls, and the story of Suikoden II truly begins.

The ending, however, shows an exhausted Jowy, who has run away from his duties as King of the Highlands. At the beginning of the game, Riou and Jowy are tied together by two True Runes: The Bright Shield Rune and the Black Sword Rune. At the top of Tenzen Path, Jowy demands that Riou fight him to the death. If all the previous requirements are met, the player can continue to defend, Jowy demanding that Riou take hold of his Black Sword Rune. Riou continues to refuse, with Jowy begging that he be slain for his crimes. Riou chooses to heal Jowy with the Bright Shield Rune, and the two begin to atone for their sins. 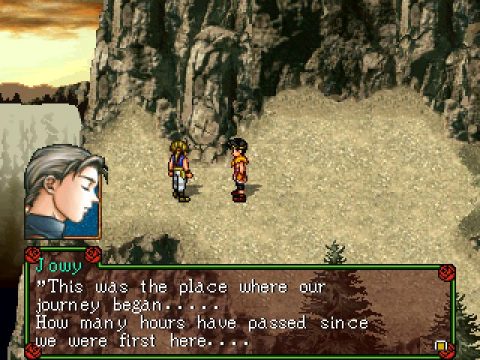 What is wonderful about this ending is how it shows how powerful Riou, Jowy, and Nanami’s relationship is. Nanami recovers from her injuries, Riou decides he no longer wishes to lead the Liberation Army, and Jowy uses his second chance at life to atone for his sins as King. The three vow to be together, just like they were as children. The final scene of the ending shows the three of them escaping, readying for a new adventure. After the destruction of the Highland Army, Jowy’s wife, Princess Jillia, is seen caring for Pilika, the young girl Riou and Jowy rescued from Luca Blight in Toto Village at the start of the game. Choosing to not make their selves known, the three protagonists watch from afar.

This ending stuck with me a long time and I always shot for it whenever I played Suikoden II. Growing up, I wasn’t the biggest Nanami fan, and yet I couldn’t ever allow her to die. To me it was important that the trio be together, regardless of circumstance and war. In hindsight, I get why people dislike this ending: Jowy gets off fairly easy, and rather than continue their responsibility to their respective nations, Jowy and Riou choose to leave it all behind. They are young leaders, and thinking about it, their friendship goes through so much trial and tribulation; their values both ethically and politically are truly put to the test. It’s why Jowy’s final speech at the Tenzen Path is so valuable to the core of the game: he wanted to be remembered, he wanted to be the son his father would love, and wanted to be the one to save the world from political turmoil. When he’s been defeated, there is a reiteration of these feelings, not realizing that Riou and Nanami were always his true home. 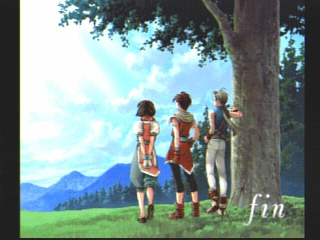