Xenoblade Chronicles is a game that very much earns all of its narrative plaudits, and puts great effort into all of its story beats. Even early on, when a character appears to die, it’s after the game has spent significant time establishing the relationships between her and the other main characters. When she is revealed to be still alive, it is only after many slow reveals of the process mechanical enemies are using to make them immune to the Monado, which cannot harm Homs and other residents of the Bionis. The game slowly builds up hints and lore about its strange world of two dormant titans, the aforementioned Bionis and the mechanical Mechonis being the only land masses. Despite all the groundwork laid out for the reveal of the actual villain of the game, it still comes as a shock, and, naturally, an incredibly memorable moment.

Having finally defeated the leader of the Mechon — Egil — Shulk and company reconcile with Egil as they learn he was trying to prevent the Bionis from further destroying his already decimated people. However, as it turns out, Shulk and company have unknowingly been carrying around the very means by which this will happen. Dickson, one of the steady allies of the party from the outset of the game shows up and seemingly guns down Shulk, releasing Zanza, the soul and god of the Bionis. Shulk has been a vessel for Zanza ever since he was a child when the Monado was first found.

Thus starts a roll of shocking lore and events. Zanza considers life on the Bionis nothing more than energy, and in fact, has routinely wiped out new species that pop up on the Bionis after a time. The one race that has hung around, the High Entia, are revealed to be pawns of Zanza, changing into monstrous forms at his command, and becoming the agents of restarting life on the Bionis. Egil makes one final effort to stop Zanza, but with Zanza now in control of the Monado, he attacks with the full might of the Bionis, dealing a fatal blow to the Mechonis, and the goddess Meyneth sacrifices herself so that the party might escape. 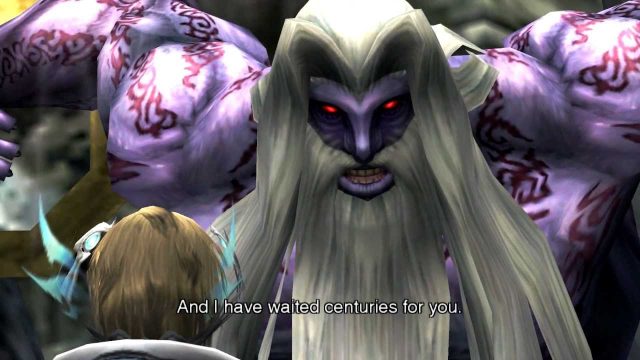 The shocking twists and turns really stuck with me because of how well constructed they were. Zanza is previously known to the player, in the form of a giant held in chains at the top of a tower, but his true nature is not. The High Entia’s true purpose also harkens back to earlier reveals, particularly with how the race was seemingly intent on its leaders taking a Homs consort. Suddenly it becomes clear that the High Entia are trying to breed out whatever genetic trait causes them to become Zanza’s pawns. Finally Dickson’s betrayal, while shocking, is set up by him knowing more about things than he seems to be telling throughout the game.

The player is left to ponder the shocking turn of events, and largely try and figure out what on earth the party can do next. After all, this is one of the rare instances in RPGs where the villain has essentially completed their objective, and with the goddess of the Mechonis now gone, it feels like a hopeless struggle. Naturally it isn’t, and Shulk turns out to be far more than just a vessel, but the shock and hopeless feeling after this series of events lead this to be one of the most memorable RPG moments.