Disgaea is not known as a series that tugs at one’s heartstrings. The games can generally be summed up as silly nonsense, mostly. When the first game, Hour of Darkness, hit the scene, I was drawn into it due to a budding interest in SRPGs. Laharl and friends are a fun bunch, lots of laughs are had and while there are serious elements to the story, it’s hard to take things too seriously.

But there’s this one thing that really changes things, especially for Laharl. The “Big Sis” Prinny, the pink one who is obviously different, has some face time throughout the early game and when the big event, the red moon that allows prinnies to reincarnate, hits it’s already obvious who this prinny is. She said she killed herself, which is a grave sin, and was made a prinny because of it. Well, turns out she is Laharl’s mother. 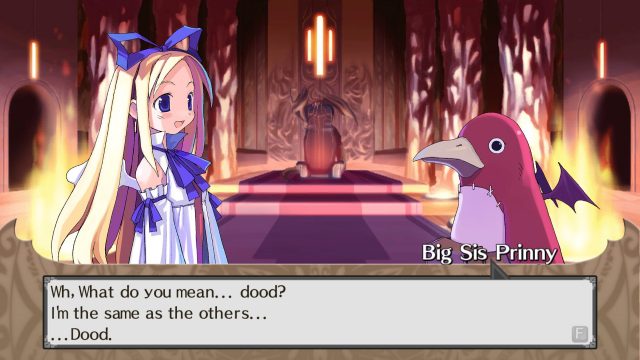 What makes this event really dig into your chest is Flonne trying to guilt her into talking to Laharl as his mother. After being rebuked by Flonne, “Big Sis” Prinny reincarnates, and you’re left with a quieter version of Laharl, who is distraught over the situation. I think maybe it’s because I liked the characters so much that this stung so badly. Having lost my father relatively young I could really relate to Laharl.

The game takes a bit of a twist from that point on, with the seriousness building up as the game goes on. It remains silly, sure, but the red moon chapter really changes the path Laharl is on.