Music can play a key role in what makes certain events memorable, particularly in the days before voice acting was widespread. Final Fantasy IX is one such game that utilises the stellar soundtrack from Nobuo Uematsu to great effect multiple times, but the one that stands out most to be is the section at the end of the third disc featuring the track “Not Alone”.

“Not Alone” only appears in the game for a brief period, but its impact is such that is has come to be associated hugely with the game, and in particular its protagonist Zidane. The track plays in the section taking place at the castle Pandemonium, shortly after Zidane learns his true origins as an “Angel of Death”, a gemone created on the world of Terra designed to bring ruin to the world of Gaia, where he grew up and has come to love, so that Terra can effectively assimilate it. As a result Zidane becomes mired while he battles past the castle’s guards, having had what made him who he is ripped away. Convinced that given his creation he is really an enemy to his allies in the game, he tells them to leave him, but they insist on fighting with him until he comes around, deciding to fight for he own purposes rather than one thrust upon him. 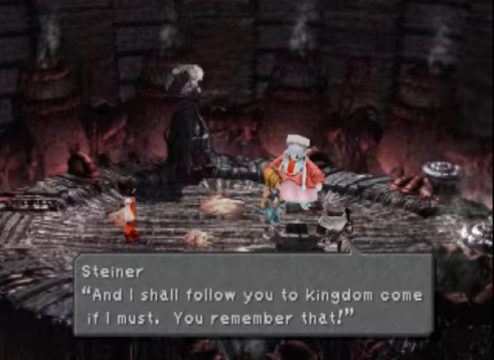 As tracks go it’s a relatively simple one, but that what helps it stick in the memory. The distorted guitar riff helps convey the confusion running in Zidane’s head, but it also brings the upbeat tone of the message from Zidane’s allies that he isn’t alone and they are all fighting with him. Some could argue that given his nature throughout Zidane could believably have also thrown off the revelations, but the whole sequence serves to show the difference between Zidane and main antagonist Kuja. While Kuja has always been acting on his own, simply manipulating others to meet his goals, Zidane has created bonds with others, and those bonds give him a greater sense of belonging, letting him devote his efforts to helping people rather than simple destruction. By this time Final Fantasy IX has had many memorable moments, but “Not Alone” provides an almost perfect cap on Zidane and his journey to that point in the game.