Spoiler Warning: Tales of Symphonia – Hot or Not

Tales of Symphonia – Hot or Not

Tales of Symphonia was my first experience of the series. Initially, it seemed like a traditional JRPG tale of going on a journey to pick up the usual blend of key items, learning new powers, and so forth. However, this is far from what the game is about, as it soon beings to subvert and play with many of the standard tropes. This is a theme that is shared across the Tales series, most notably in the trio of Symphonia, Abyss, and Vesperia, but the scene that showed Symphonia wouldn’t be another straightforward JRPG was when Lloyd confronts Colette about what’s been happening to her on their journey.

After visiting a couple of the usual landmark towers, each of which has resulted in Colette’s receiving another angel power, Lloyd has grown suspicious of what Colette’s transformation into an angel — ostensibly so she can help save the world — entails. After each granting of new power, she has become drained and in need of a rest, and there are hints of it having other negative effects as well. To that end, Lloyd uses a rest in camp to give Colette a nice hot mug of coffee, taking pains to mention its hotness and getting Colette to agree with that yes, it’s a hot cup. Lloyd then reveals that he lied, and it’s actually iced coffee, Colette changing tack quickly, but then Lloyd reveals his double-bluff that it was hot all along. This finally breaks Colette’s defences, causing her to drop the mug and admit what’s really been happening to her body. 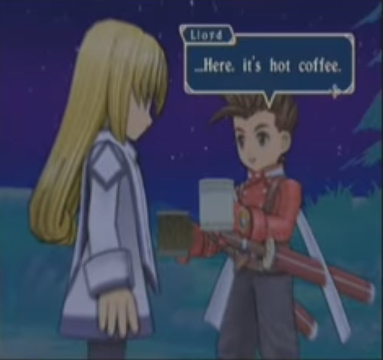 Now, it has to be said that the scene itself is rather goofy in how it pans out — both Lloyd’s final switcheroo and Colette’s shocked dropping of the mug rather overplay it — but it’s all part of what gives it both its charm and makes it so memorable. It also helps to further solidify the two characters. Lloyd reaffirms both his hostility towards the idea that people should be required to sacrifice themselves for the sake of others, but accepts that he has not really considered Colette’s feelings on the matter and promises to keep supporting her. Meanwhile, Colette shows that she is more than willing to make such a sacrifice herself, but that she is also hesitant at accepting the help of those she cares about, from fear that it will end up hurting them. The way the scene manages to use what is in effect a humorous setup to create what amounts to a rather melancholy and touching scene at the end is just one of the early ways the game hints that things are not what they seem, and the game does a stellar job of keeping players on their toes when it goes to the story beats throughout. It’s a huge part of what keeps Tales of Symphonia near the top of my all-time list.