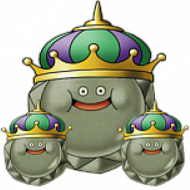 plattym3
Matt joined RPGamer as a staff member in 2018 after being a long-time fan of the genre and the RPGamer podcasts. He loves anything Dragon Quest as well as a good turn-based or DRPG grind session.
This user account status is Approved
About About
Comments Comments

Arrowverse: Arrow, Flash, Supergirl, Legends of Tomorrow
Star Trek: from Kirk to Discovery
How I Met Your Mother
The Series of Unfortunate Events
The Big Bang Theory

Once upon a time I asked my grandmother a favor: order me a subscription to Nintendo Power because I could get a free game! She said she'd think about it and months later I'd forgotten all about it. On Christmas day I was handed a stack of magazines and a brand new copy of Dragon Warrior. It was like nothing I'd ever played before, and I fell in love. In the Nintendo days I was all about the Dragon Warrior series and Final Fantasy I. In the SNES days it became all about Madden football, although The 7th Saga was amazing. I got out of RPGs for a generation or two, and finally rejoined the cool kids when I bought a PSOne (you know, after PS2 came out).

After loving Dragon Warrior 7, I quickly upgraded to PS2. The Grandia series, FFX, and pretty much anything by Level-5 became must-plays. Got a GBA and started catching up on Pokemon and various other remakes and ports of older games released on handhelds.

Expanded my horizon even more in the DS/3DS days with Etrian Odyssey and Rune Factory games.

Most recently got back to Playstation when I got a PS4 for the Dragon Quest Heroes games and a Vita for Dragon Quest builders. Vita is my platform of choice recently with so many great game ports I've missed through the years and so many great indie games.

Turn-based games are my bread and butter, but a great light ARPG like Rune Factory or Fantasy Life can hook me for 100+ hours!

Legends of Amberland: The Forgotten Crown