The Souls have left an undeniable impact on me and my journey into video games. From the first moment I stepped foot into Boletaria to the beautiful skyline of Irithyll, From Software’s action RPG series, seeped in its old-school design, has never quite left me as a benchmark for excellence in not just RPGs but gaming in general. As to not waste precious space and time pointing out every grand moment the series has to offer, I instead return to the game that haunts me to this day for its perfect execution of its story and setting.

Bloodborne starts off early inundating the player, known as the Hunter, with its setting: the dark and twisted city of Yharnam, a place known for the miraculous curing of its blood ministrations. It becomes readily apparent that all is not what it seems in Yharnam. The healthy citizens lock themselves up at night as an ever-increasing number of half-human beasts, oddly reminiscent of werewolves, take to the streets while other hunters come to take the beasts out in turn. Members of the Healing Church, the prevailing leadership in the town, turn into even larger monstrosities still. Outlandish statues and chained coffins litter the streets and the sounds of a baby crying can be heard but from nowhere in particular. Strange messages reference the healing properties of the Old Blood and speak of a “Paleblood” sky. Upon leaving the city, the player is then confronted with a forest filled with even stranger creatures that seem to defy the very laws of nature. This is when the players come to Byrgenworth. 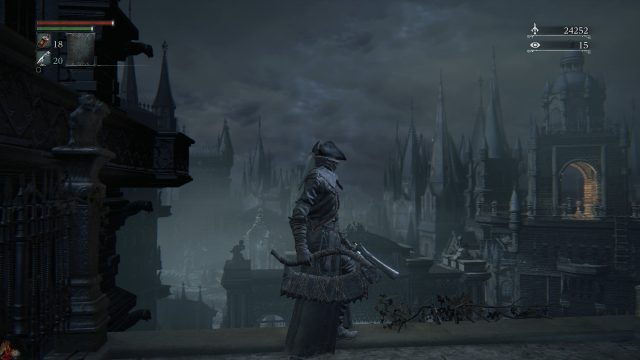 An old university drenched in the study of the blood that has come to define the city, Byrgenworth houses an old man bound to a wheelchair. Deformed, or transformed, if you would, beyond even the ability to speak he instead instructs the player in the light of a full moon to take a leap of faith into the depths of the sea. But rather than crashing into the water, the reflection of the moon transmits the player to an endless white sea occupied by a creature named Rom, the Vacuous Spider. Initially docile, attacking the creature will lead it to defending itself but in a mostly impotent manner.

Upon its defeat, the player is then treated to the sight of a blood-red moon before being transported back to Yharnam proper. Once there, the veil has been lifted and the true horrors of Yharnam are in plain sight. Hulking alien figures cling to the sides of walls, soundlessly observing the actions below. Eyeballs appear and cover many a thing, from the lanterns wielded by large figures to the very skin of the several boars that feature in the game. The sky casts the city in a hue of red, the ritual has commenced. What was once an action RPG about killing werewolves has managed to re-contextualize itself as grander tale involving alien gods, multiple layers of reality, and the poor fools who tried to manipulate them to their own ends. 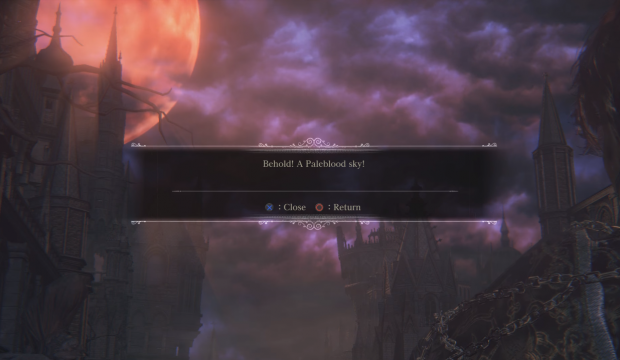 Effectively, Bloodborne has managed to pull off a spectacular plot twist. No small feat considering the series is more known for lore hunters digging through soft details than it is focused on traditional narrative structure. Instead, we are given a master class in the fusion of game mechanics and narrative, where the gameplay aspects serve to reinforce the story the game is trying to tell to the point that every fits together in a perfect package. The individual qualities of those mechanics aside, the very blending of these elements is so crucial to the crux of the game and handled with such care that the result is a standout effort even within a series of standouts. On top of that, it remains one of the very few examples of the successful cosmic horror in video games and one of the even fewer examples of an RPG doubling as a horror game. It is arguable if Bloodborne can even be called the best in its own meta-series, but it is certainly unique among them.