Tell Me Sarah, What Do You Think of My Labyrinth?

Labyrinth of Refrain: Coven of Dusk is not exactly a new game at this point. Japanese audiences first got a PlayStation Vita version in 2016, with a PlayStation 4 release the following year. This latest release, localized by NIS America, marks the game’s introduction to PS4, Switch, and PC owners outside of Japan. My first impression of the game when I got the chance to preview it was that the needlessly complicated terminology used in its gameplay systems would be a real bear to get used to. The developers clearly anticipated this, as evidenced by the vocabulary primer included as part of the game’s marketing materials. As it turns out, I should have been more worried about the unfocused plot, repetitive combat, and propensity for needlessly padding out its roughly hundred-hour runtime instead.

To its credit, Labyrinth of Refrain delivers on its core gameplay premise in spades, and will provide ample satisfaction for the hardcore dungeon grinder. Exploration is tile-based, with each step further filling in the map. Dungeons contain multiple floors and sections, each one of which can cover a rather large area — the map screen consists of a 31-by-31 grid. There’s a nice variety of dungeon locales as well, ranging from the sewers underneath the town of Refrain (the game’s setting) to more exotic locations like a kingdom of pint-sized gnomes, an enchanted forest, and the city of Refrain itself.

It’s a shame that the variety brought about by these imaginative settings doesn’t go beyond skin-deep. Apart from the addictive quality of causing the map to fill in and enemy encounters — oh so many enemy encounters! — the reality is that there simply isn’t much to actually do within the dungeons. For the vast majority of the game, the player is given some sort of task to accomplish, even if sometimes this task amounts to little more than “explore the labyrinth.” Usually, there will be a point of interest marked on the map that needs to be reached, which will trigger an event scene to occur. At certain points, an objective will direct the player to leave the dungeon in order to advance the story. Due to the frequent need to exit and reenter parts of the labyrinth, there’s a high degree of repetition involved here, with dungeons being traversed again and again over the course of the game, with nothing new to show for the repeat treks.

With each step the player party takes, enemies — represented by different-colored spheres — move as well, actively giving chase if they happen to come into close proximity. Given that the dungeons are full of bottlenecks and obstacles, combat is unavoidable and frequent. Much like dungeon exploration, combat takes place in a first-person view, with enemies lined up on the screen, though characters will frequently jump and fly across the field of vision as they deliver their attacks. Players are given control of up to five groups, called covens, to command in battle, with each coven able to contain up to three individual attackers. This means, depending on the player’s preferred setup, up to fifteen combatants can take part in battle, with additional units assigned into non-combat supporting roles. Covens can either act as a unit — attacking, defending, or casting spells by using donum points — or individual commands can be selected for each unit, though the menus are far from friendly to navigate. It is quite possible, for example, to play for eighty hours or more without ever learning how to use items during battle. 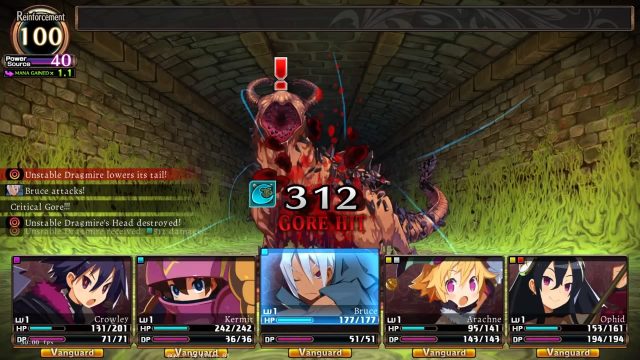 Ah, the simple days back when you only had a party of five to micro-manage while taking down monsters.

Contrary to the spartan dungeoneering experience, the game makes it its business to bombard the player with a glut of systems and options to keep up with both outside of and during combat. There are character formations to consider, gear for all fifteen-plus eventual party members to equip, and experience points to stockpile for maximum grinding potential. Some options are left completely up to the player to figure out, such as the ability to adjust each character’s stat growth system, while combat features so many additional nuances that they begin to bog the game down. That equipped gear and character formations affect combat efficiency is a given, but when each fighter’s astrological sign, lucky number, and dominant hand enter the equation, the game crosses that invisible boundary from sensible into absurd.

The included auto-battle feature means that a decently equipped party can proceed through 95% of the game’s battles without much need for player intervention, way too hands-off to make combat entertaining for this length of time. If nothing else, it does at least speed up the grinding process, which, on normal difficulty, is quite necessary in order to be equal to mid- and late-game challenges. Should things get too hairy, spending a bit of collected mana does allow players to alter the game’s difficulty, though the easy setting effectively eliminates the need to approach combat with any skill whatsoever, and is only recommended for players more interested in the game’s narrative. Boss battles, already few and far between (with several being entirely optional), are also robbed of any bite this way. Interestingly, even when playing on easy, the game’s final boss is capable of easily wiping out an entire party, unless the player has attained a specific spell only available after completing nearly all available fetch quest side missions. To make matters worse, there are a handful of these artificial roadblocks installed, grinding the game to a halt until six withered weeds, two dried onions, and other assorted junk are collected.

The story itself, for most of the game, is all over the place and unfocused. The plot is centered around Dusk Witch Dronya, who, along with her child apprentice Luca, has been summoned to the town of Refrain in order to explore its magical underground labyrinth. The labyrinth itself is full of toxic miasma, deadly to humans, so the only ones that can enter are wooden puppet soldiers dispatched by Dronya. The player takes on the role of the Tractatus de Monstrum, fondly known as Tractie, a sentient book who commands the puppet soldiers during their exploration of the labyrinth. Dronya, it soon turns out, has her own reasons for wanting to explore the labyrinth, with Tractie reporting back to her on any findings made during dungeon dives.

The narrative is advanced in lengthy, fully voiced dialog scenes that occur between trips into the labyrinth. Early on, these vignettes — which feature Dronya and Luca interacting with various townspeople in sometimes interesting, sometimes humorous ways — are a great way to break up the monotony of dungeon crawling, particularly as the early dungeon floors don’t offer much variety or excitement. The trouble is, however, that the individual narrative vignettes often don’t seem to have much connection to each other or the dungeon exploration; rather, many of them come across as time fillers for the sole purpose of taking a break from exploration. It isn’t until much, much later that a cohesive narrative actually begins to take shape, putting the dungeoneering into some much-needed context. One particular late-game dungeon really pushes the narrative forward in ways that feel significant, revealing large amounts of character backstory and motivation, both of which are sorely lacking from the rest of the game. 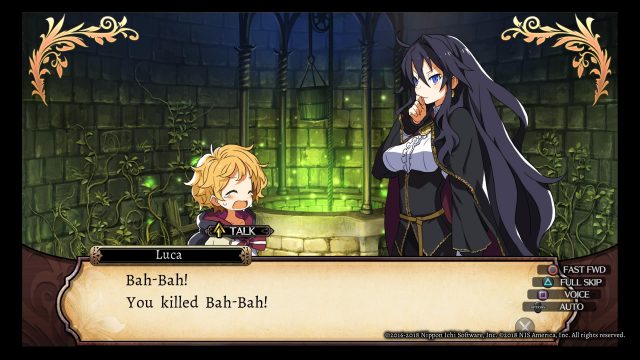 Kicking a cute and cuddly pet lamb into a deep well does not a likable protagonist make.

This issue is indicative of some general pacing and characterization problems the game suffers from. While entertaining, the story vignettes do little to flesh out the supporting cast of characters in any significant detail, instead offering nuggets of characterization that will rarely, if ever, come up again. Information is also purposely withheld to allow for some late-game reveals, but having no handle on the plot or characters for such a protracted amount of time doesn’t do the game’s pacing any favors. Dronya herself is cruel and abusive towards those she meets, especially her young apprentice, Luca. The mischievous musical score present for much of the game is strangely at odds with moments such as characters getting beaten, knifed to death, and, in one case, a not-so-subtly implied rape. For the most part, the disparate bits of narrative fail to string together into a cohesive story, and the one late-game dungeon that manages to pull this off is immediately followed up by yet another dungeon that reverts back to monotonous combat and plot events.

With such a lengthy game, it’s no wonder that musical tracks, no matter how nice or moving they may be, do get old long before the final set of credits roll. There are some lovely tracks, particularly during the game’s more pensive and emotional moments, but the repetitive nature of the gameplay means that most of the music wears out its welcome too soon. The saving grace here are the excellent voiceover performances by a talented cast of actors. All story scenes, of which there quite a lot, are voiced in their entirety, with only dungeon events being restricted to text-only. By contrast, the too-frequent battle shouts are far less pleasant, but can at least be toggled off in the main menu.

Another area where Labyrinth of Refrain achieves some relative success is in the graphics department. Admittedly, dungeons are a bit on the bland side, despite each zone featuring its own unique look, and there’s little animation to speak of during story moments apart from lip movements. But the character models themselves are of high quality, as are the hand-painted backdrops of Refrain and its surroundings during narrative events. Enemy visuals are similarly impressive, crisp and clear, featuring a good variety of, in some cases, truly bizarre and richly imaginative creations. These visuals really pop in handheld mode, and manage to retain a lot of their fidelity when playing the Switch docked.

Labyrinth of Refrain will not disappoint those looking for a thorough first-person dungeon grind. Though combat is straightforward, despite the battle system’s overabundance of bells and whistles, there are many, many hours of pure dungeon exploration in store for intrepid adventurers. Additionally, a ton of nice-looking and well-voiced story beats have also been implemented. The troubles, however, become evident given how everything just somehow fails to flow together into a cohesive whole, so that the sum of its parts fail to elevate the total package. Instead, we get a collection of decently executed ideas that are certainly unique, though less entertaining than they should be.