So Many Wonderful Puns

Welcome back to the Kingdom, Your Meowjesties. It’s time to return to the catventures in Cat Quest II: The Lupus Empire.  First hinted at in Cat Quest, there’s an entire doggy kingdom just across the Pawcific, and war has erupted out between the two kingdoms.  Wasn’t there supposed to be peace in the world?  A new duo will need to uncover the secrets two kings are hiding, with new equipment, additional goals, dogged new characters to help them out, and more cat and dog puns than one can shake a stick at.  Then throw it.  Then retrieve it.  Good boy! 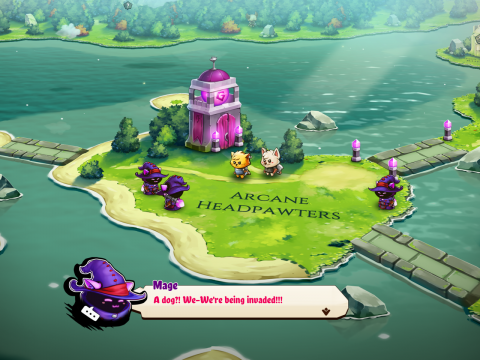 It’s true, the canines have invaded

Not content to be the master of the superior cat race, players now control two characters: one feline, one canine.  They’re both kings of usurped kingdoms, and they’re ready to reclaim them. This time, the game has expanded its story to not only contain the first game’s Felingard, but also the fabled Lupus Kingdom. The world is now huge, but a few things help contain the sprawl.  First is a teleport system, where players can zip quickly back and forth between kingly monuments in both Felingard and the Lupus Empire.  Second, waterwalking makes a triumphant return from the first game.  Between the two, even the significantly expanded world feels very approachable.

However, unlike the first game, players don’t receive much direction in terms of where and when to acquire side quests.  These are available all over, but the main story quest chain often drives our feline hero away from hubs where they’re located, or worse, they unlock after those following the main storyline depart from a region.  While this is the only negative change between the first and second game, it’s a notable one. For those willing to divert and seek out this side content, there are at least ample quests to take on, special enemies to pounce, and even the developers to rout.

Combat is simple but easy to catch on to: one button to attack, another to dodge, and two shoulder buttons assigned to each character’s spells, depending how the player elects to dole them out.  Enemies telegraph their attacks with shadows on the ground, denoting where attacks will hit; these can be circles, columns, or other shapes, and players can use these hints to roll out of the way before unleashing their own attacks and spells.  Weapons come in two broad categories: melee physical weapons, which require the wielder to be up close and personal with enemies, and ranged magic weapons, which allow cats and dogs to fire off ranged attacks, but halves the wielder’s hit points in exchange for this perk. Some enemies are only weak to physical attacks and others to magic, and the game effectively encourages specializing one of the characters in magic damage, with a ranged weapon, while the other sticks to melee and focuses their magic on support spells.  This setup also happens to work incredibly well, though it isn’t the only way to play. 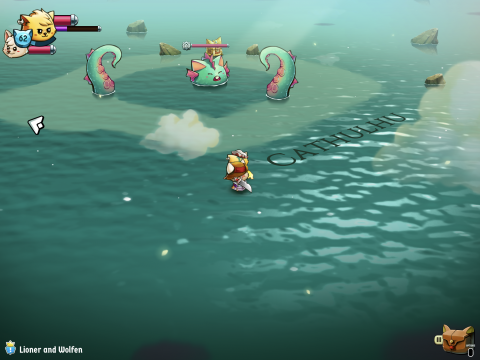 Both the cat and dog hero can wield two magic options apiece, giving the party four slots with a few new options also included, which is a much welcomed improvement from the first game’s pawltry two total magic slots. As quests are conquered and dungeons delved, the heroic pair will acquire a variety of gear including weapons, armour, and additional spells. All three can be upgraded, with one particularly welcome change over the first game being the ease of acquiring the coins needed to do these upgrades.  Found a piece of duplicate gear?  Not a problem — the existing one simply absorbs the levels and a stronger piece remains.  Frequent gear swaps are not uncommon, giving the game a refreshing amount of variety in both gameplay and visuals. Want some help along the way?  A second player can join the pawty, controlling either the dog or cat king depending on their preference.  Adventuring solo?  Use the triangle button to swap between the two heroes.

As there are now two kingdoms, some aspects of the first game are split, while others are centralized.  Armour crafting is still handled by the adorable Kit Cat of Felingard, while weapon smithing is now the realm of Hotto Doggo, who lives in the Lupus Empire.  Magic spells have seen significant reworking.  Spells are hidden inside dungeons, and they’re usually off the beaten path, so players will need to hunt high and low to get their paws on a variety of them.  Leveling up these sneakily stashed spells is now done at a single location near a king’s monument, so players can pop back, level up a few spells, then zip back off to continue their adventures.  Streamlining this system is particularly welcome. 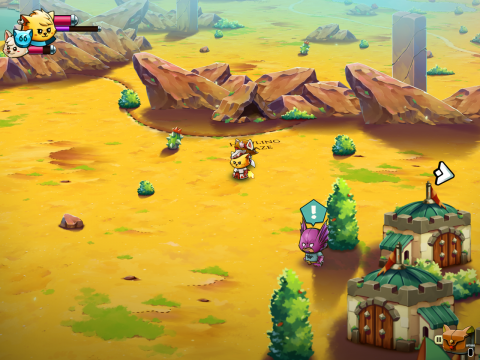 Side quests abound, though players need to seek them out

Sound and graphics are where the game has seen a mixed amount of attention.  While most of the sounds will be satisfyingly furmiliar to felines of the first game, new tunes for the canine-heavy areas have been added.  Graphics are similarly a mix of reused assets from the first game, with plenty of new outdoor areas in the Lupus Empire as well as many new dungeon layouts.  While neither of these aspects of the game will make players bark with excitement, they’re cute, colourful, and provide many toe-tapping beats.

Cat Quest II: The Lupus Empire could be easily summarized as more Cat Quest, but that alone wouldn’t encompass how fun the game is or its many improvements.  Though built with familiar RPG trappings, between the puntastic writing, fun combat, excellent story pacing, and world building, there’s nothing out there quite like Cat Quest II.  With expanded character options, and an even bigger world to explore, there’s really very little not to like about the second romp from The Gentlebros.  A full adventure will take players five to ten hours to complete, and the game never overstays its welcome, so be sure not to catnap on this one.