The Start of a New the-Spinoff Franchise?

Who is to say what the developers at Tose and Square Enix looked to for inspiration when coming up with the concepts behind World of Final Fantasy? Certainly nobody can deny the main mechanic of capturing creatures during battle using tiny geometrical prisms then using them in combat doesn’t sound conspicuously similar to another blockbuster franchise. But as fans of Final Fantasy or Pokémon will quickly point out, there are quite a few key differences between the two, and World of Final Fantasy is a lot more than a simple one-trick creature combat pony. Having never played so much as a moment of Pokémon, I started my playtime with a healthy dose of skepticism. As it turned out, over the course of the next seventy-plus hours, I was in for some pleasant surprises.

The game’s trailer covers the superficial basics, and some may outright either dismiss it as a Pokémon clone or embrace it for the same reason. However, World of Final Fantasy distinguishes itself through its narrative, which begins via cinematic as soon as the game starts up. The main protagonists are Reynn and Lann, twins who live in a curious place called Nine Wood Hills, which doesn’t appear to have any other residents. While at work at the coffee shop one day, the pair encounter a strange woman named Enna Kros and the floating white fox, Tama. These two guide Lann and Reynn through a portal to the world of Grymoire, a dimensional plane in which all people exist as tiny chibis called Lilikins. The twins alone are able to switch at will between Lilikin form and their original size, known as Jiants.

Grymoire, a wondrous collage of Final Fantasy goodness fit for any series enthusiast, is in the midst of an invasion by the evil Bahamutian Empire. It is here that the game earns its name, as characters, places, and creatures culled from a host of Final Fantasy games populate and live side-by-side in this world; the game wears its nostalgia hat proudly. It doesn’t take a series die-hard to enjoy the setting, but there’s a certain thrill to see heroes from across the series interact with each other and even join Reynn and Lann in battle. From the first entry’s Warrior of Light, fan-favorites like Terra, Cloud, and Vivi, all the way to contemporary main characters like Snow and Lightning, there’s a lot of fan service here. During the course of the game, the party also visits familiar locations mixed in with some original creations. Locales like Balamb Garden, Figaro Castle, Mako Reactor 0, Niflheim, and Besaid can all be explored, some as full-fledged dungeons, others as small-scale towns. Then there’s perhaps the most important element, gameplay-wise: capturing and fighting alongside classic Final Fantasy monsters, known in this game as Mirages. 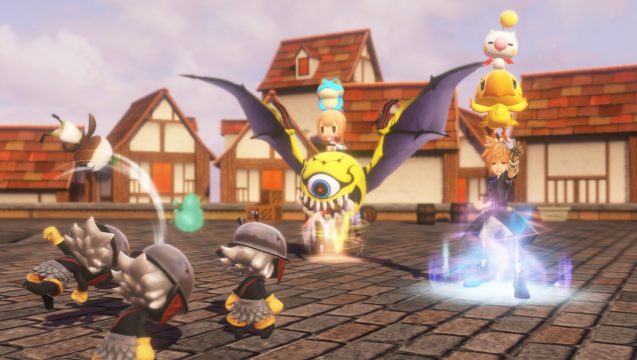 Putting together the right stacks for the task at hand is key.

This is where the game will either score or lose most of its points with players, depending on their feelings toward the traditional Active-Time Battle system found in “old-school” Final Fantasy titles. The default battle system in WoFF is a blend of active and real-time combat, with hero and enemy icons continuously moving up an action meter on the left side of the screen. Once it reaches the top, an action like attack or defend can be performed, though enemies can act much quicker than players, who can easily get tied up in battle menus. Two successively slower-paced variants can be used instead, with the slowest-paced one pausing time whenever either a hero or monster is able to perform an action. The game recognizes the split in player preference, and even makes a humorous reference to proponents of this archaic system with a tongue-in-cheek help screen. Whichever method is used, it should be understood that World of Final Fantasy is inherently a grindy game, even moreso due to the nearly two hundred Mirages that can be captured and leveled. Getting your hands on Mirages works a bit like a puzzle, as each type of Mirage has a specific condition that must be met in order to imprism it. For some, their HP must be reduced to a certain percentage without killing them, others have to be hit with a specific status effect. Previously captured Mirages often have the abilities necessary to catch others later on down the line. Even then, they can only be caught if players possess the appropriate prism for that creature type, though one is usually acquired each time a new Mirage type is discovered. Constantly catching new Mirages, as well as leveling them through combat, can be addictive, with some type of miniscule gratification after nearly every battle.

Being able to capture and fight with Mirages only accounts for half of what makes the combat system stand out. Players must also build stacks using these Mirages, which constitute the battle party. Most mirages come in three sizes: small, medium, and large, and must be stacked according to their size, small on top of medium, medium on top of large. A handful of extra-large Mirages can also be captured, to be summoned during battle. Reynn and Lann themselves must also be part of each stack, and will either fill a large or medium slot, depending on their current size. That means there are a total of four possible stacks, only two of which will be on the battle field at any time. This opens up many possibilities for combat, as stacks share all stats, like HP, strengths, weaknesses, magic immunities, etc. At the same time, flexibility is severely handicapped since stacks cannot be changed at will. Being hit by certain attacks can also cause the stacks to topple, putting a once-powerful team at a perilous disadvantage. Combining multiple Mirages of the same element in a stack can even lead to more powerful spells or abilities, while opposing elements may make a stack immune to both elements. Experimentation is key here, and highly encouraged. Unfortunately, despite being one of the game’s strongest selling points, the interface for managing and leveling individual Mirages is, at best, clunky and unwieldy. Once a large number of Mirages has been amassed, trying to search for a specific stat or ability becomes a nightmare. On top of that, the prismarium, where all Mirages live, can only be accessed from specific spots within each dungeon. There’s a ton of strategic potential here, but getting the most out of it requires a saint-like level of patience.

With such an emphasis placed on its combat system, it feels like World of Final Fantasy‘s story received short shrift for most of the game. A conflict is introduced early on, but its resolution moves along at a snail’s pace; rather than a constantly engaging narrative, Reynn and Lann are sent on a game-spanning McGuffin hunt, simply for the sake of collecting Mirages. More interesting is the story of Grymoire and the rival Bahamutian Empire, two nations at war with each other, unfolding all around the twins. It isn’t long before the pair discover whole towns under the malignant rule of the Bahamutian Empire, and hear rumors of an underground resistance movement known as the League of S. Even these more interesting developments don’t get as much of a spotlight as they should, and the story is left to its own devices until the final act of the game, when the main plot is suddenly catapulted back into the forefront and events come to a head. There are plenty of twists and turns before it’s all said and done, and the last act can easily take ten to twenty hours on its own, depending on how thorough players want to be. The trouble is that, with the focus taken off the piecemeal leveling and progression of Mirages, the end of the game feels disproportionately padded with boss fights. Luckily, there is plenty of side content to water down the endgame, including coliseum battles, side stories focused on heroes and villains from throughout the franchise’s history, and several post-game dungeons. Some side quests are also available from townspeople, though these are dull and woefully uninspired, typically in the vein of “Get those darn Minotaurs!” or “I need three potions!”. 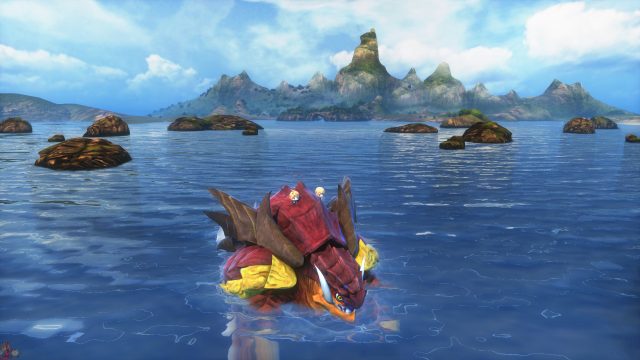 Amazingly colorful environments are just one part of the stunning visuals in the game.

Gameplay and combat may not be everyone’s bag, but the developers have done a tremendous job in providing nothing less than a top-notch presentation from beginning to end. Graphically, World of Final Fantasy shines in every sense of the word. Each and every location, creature summon, and battle spell animation looks amazing. Colors are bright, bold, and beautiful, skies vibrant, vistas lush. Character animations are impressively smooth, save only for the mismatched lip-syncing. The exchanges between Reynn and Lann, often meant to serve as comic relief due to his idiocy and naivete, is animated in such lifelike gestures and body language that it’s hard to loathe, though the intended humor does fall flat more often than not. Even little details — the rough textures of fabric or the metallic gleam reflecting off a robot — get their dues. Particle effects are realistic and flawless, without any noticeable slow-down. In short, it’s near impossible to find a fault with the visuals.

Equally as impressive in every facet is the sound design. A large part of this praise comes from the composer’s choice to work instantly-recognizable themes from previous games in at appropriate moments. Entering Niflheim or the Mako Reactor to the sounds of their familiar themes will bring a nostalgic smile to any fan’s face. Summoning Terra or Sephiroth and hearing Final Fantasy VI‘s “Decisive Battle” or VII‘s “One-Winged Angel” brings more pleasure than it probably ought to. Even the normal battle music can be toggled to one of several series tracks. All original music, while not benefitting from nostalgia, is equally as good; in nearly eighty hours, no single track became too repetitive or hard to listen to. This isn’t meant to cast shade at the performances of the voice cast, who are unanimously outstanding. Many actors have returned to reprise their roles from previous games, while more classic characters can be heard for the first time. From A to Z, everything about the presentation is as perfect as can be expected.

World of Final Fantasy is an easily misleading game. It appears to be nothing more than a Final Fantasy-flavored monster-collecting knock-off, but turns out to be much more than that. Beyond the appeal of collecting familiar monsters and creatures, the world features enough series characters, locations, and music to satisfy the most ardent nostalgic. There is a ton of content, and it is all wrapped up in a package that is as beautiful to look at as it is to listen to. Still, not everything is perfect. The combat system is skewed towards grinding, menus are unwieldy, and the main story takes an awfully long time to ramp up. However, there is very little reason for gamers to not give World of Final Fantasy a serious look. While it may resemble Final Fantasy Jr., it offers more than enough for veterans of the series to sink their teeth into.