Since its inception, Spiders has never been afraid to switch things up. Its games have run a wide range of science fiction and fantasy, consistently rethinking its style in different contexts. This continues with Steelrising, an action RPG that re-imagines the French Revolution with an alt-history twist. There is, however, a new spin to the formula. Rather than the party-based, narrative-driven stories the company has previously done, Steelrising instead skews closer to From Software’s action RPG titles. For its first foray into this style of game, Spiders falls into some bad habits that never quite allow for the game to rise to its ambitions, settling into a groove that is at times competent but often uninspiring.

The year is 1789 and instead of having to deal with the earliest days of the French Revolution, King Louis XVI utilizes a mechanical army of automatons to quell sedition and hold the city of Paris under his control. Having been isolated by her husband and cut off from the events unfolding in the city, Marie Antoinette sends her personal guardian machine, Aegis, to the city to uncover what is going on. For the relative uniqueness of the setting, Steelrising‘s story is fairly pedestrian. The first half of the game is centered around gathering together many of the significant figures of the French Revolution before tackling King Louis in the latter. Cutscenes involve many similar looking men in powdered wigs giving a broad overview of the revolution while exploration yields scattered notes and memories that speak of weird alchemy and hidden conspiracies. Those knowledgeable of the actual history may derive a greater pleasure from the interpretations of historical figures, but the average person may have trouble tracking what’s going on. The standout is oddly Aegis, whose performance is appropriately stilted and distant. Her design also works, an interesting retrofuturist take that highlight Aegis’ mannequin qualities with a sci-fi sleekness not usually associated with the time period. 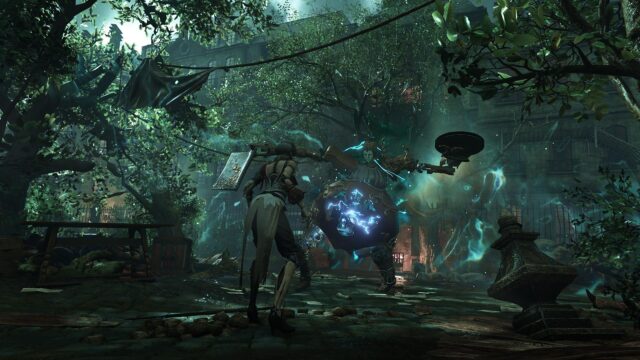 Some enemies will create a fog that can only be cleared by their destruction.

If only the same could be said for the rest of the game. Story aside, players will spend most of their time either in combat or wandering the streets of Paris. When in combat, Steelrising is merely fine. Available to the players is the standard assortment of fast, medium, and slow weapons with a mix of light and heavy attacks that do the usual thing of trading in damage for a rapid succession of hits and vice versa. Aegis can utilize some unique types of weapons — fans and bladed wheels — along with some more traditional swords, hammers, and spears, but overall the game lacks a variety of interesting options. In an effort to stop people from mashing the attack button, the developers included an overheating mechanic, where draining Aegis’ stamina leaves her in a vulnerable state that can be alleviated by a timely press of a button, albeit it with some buildup of the Frost debuff. Its the one wrinkle in the combat that acknowledges that the flow of the player’s actions is vital to the feel of combat. Due to limited defensive options and most attacks not interrupting enemy attack patterns, combat can feel oddly reactive for how aggressive it thinks the player should be.

The sorts of attacks that can interrupt an enemy are immobilization and debuffs. Immobilization acts like the enemy’s stamina gauge — do enough immobilization damage and the character will be left in a vulnerable state and open to a critical hit. Debuffs come in three different flavors: Flame, Frost, and Fulmination. Flame deals a small, constant amount of damage; Frost freezes an enemy in place, and Fulmination increases damage taken. All of these debuffs are incredibly powerful and can trivialize many encounters. Despite its influences, Steelrising is often an easy game, the difficulty only providing a challenge when throwing a variety of enemies at once. These instances can create frustrating choke points in levels, but otherwise in one-on-one situations, Aegis can handily dispatch most foes. Bosses in particular, while visually and mechanically distinct, are surprisingly simple, many of their attacks being overly telegraphed and often missing while standing when Aegis is right next to them. On the whole, the combat is quite adequate, but not particularly compelling. 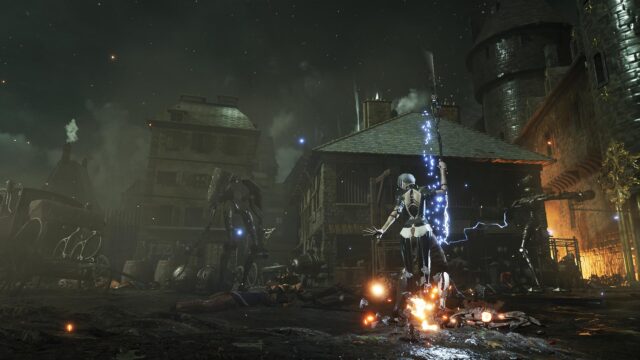 Level design is where Steelrising is at its weakest. The game’s take on Paris does not make the city seem appealing at all. Going by the locations present in the game it would be easy to assume that Paris is a series of maze-like streets connecting a bunch of hedge mazes, plazas, palaces, and sewers punctuated by a familiar landmark and artificially bound by rubble. Each of the game’s levels is based around an important area of the city, but it’s hard to distinguish any of them. Checkpoints and a lack of fast travel are also a sticking point. The first time through a given area works okay and checkpoints are reasonably placed, but repeated visits lack fast travel within the level, leading to long periods of walking the same hallways and encounters with nothing new to differentiate the experience. A few exploratory elements were added, such as a grappling hook or a high-powered kick that can bust down locked gates, but oddly most of the obstacles they help to overcome only appear after having unlocked the abilities in question, doing very little to make exploring previous areas more interesting. Spiders did find a decent compromise from the lack of a map in the compass, an item that can be used to highlight quest objectives and their distance that disappears if not actively selected. It was a boon to navigating the levels later in the game as they became longer and more confusing without being a constant nuisance of the UI.

The RPG elements of the game are very light. There are six available stats: three governing the different types of damage, one for health, one for endurance, and one for elemental resistances. The damage stats are obvious choices depending on preferred weaponry and every build benefits from additional health. As such, builds are dictated almost entirely on weapon choice and leave little room for experimentation. At least the game does provide enough upgrade materials to play around with a few weapons. Players also get to choose armor for Aegis to wear with some varying degree of defensive choice, but the differences are marginal enough that often players will just pick whatever looks good. Additionally, the player is given several choices to make throughout the game, usually tied to sidequests, but they have little impact on the events that occur and feel perfunctory. 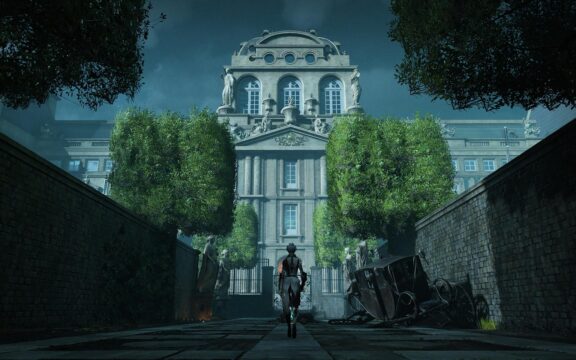 A rare moment of light shines down on the game.

In spite of its unique setting, Steelrising is a rather muddy affair. With many of the levels reflecting a city under siege, smoke, fire, and rubble are omnipresent, slathering much of the game in a thick coat of grey and black. There are a few moments where a more brilliant Paris shines through but largely it is a flat game. The game runs fine and at no point were there bugs of any major concern. Musically the game is far more about tone-setting tracks than driving motifs, but none of it left much of an impact.

For a first foray into a new type of action game, Steelrising is an okay attempt. The skeleton of a good game is there, but all of its aspects need various levels of tweaking to get the recipe just right. Some things like combat just need a fine tune to be more reactive and smoother. Others like the level design need a firmer foundation to allow for more engaging and palatable exploration. It’s far from the worst game and won’t eat up too much time, but it’s not the most solid entry into the genre.