While series fans have endured a long wait for a potential new mainline Neptunia title, a lengthy list of spin-offs has come by. The latest of those is Neptunia Virtual Stars, which takes advantage of the surge of popularity of VTubers, streamers and video creators that use CG avatars. Compile Heart’s new entry involves cameos from a long list of popular VTubers and some of the series parody-based humour, and while that may be enough to satisfy the hardcore fans, it is otherwise an unfulfilling experience.

Neptunia Virtual Stars’ story begins with the four goddesses of Gamindustri — Neptunia, Blanc, Noir, and Vert — getting their own day to enjoy the latest gaming festivities by themselves. However, when they try out a new VR game, the goddesses find themselves transported to the realm of Emote, where they are asked by its goddess Faira to save the world and its all-important Content from the invading Anti forces. Neptunia gladly dives headfirst into the opportunity to once again be a protagonist, dragging the other goddesses with her. Also teleported along with the goddesses are two new characters, Me and You, who make up the virtual idol group MEWTRAL, with two other idol pairs joining the cast later on.

The actual plot has very little to it, with the goddesses just moving from section to section while beating up the resident bad guy(s). The story’s saving grace is that there is enough successful parody, but even then it will often get hung up on a particular joke and milk it for all it’s worth. Many scenes can be swiftly skipped through without missing any important details. 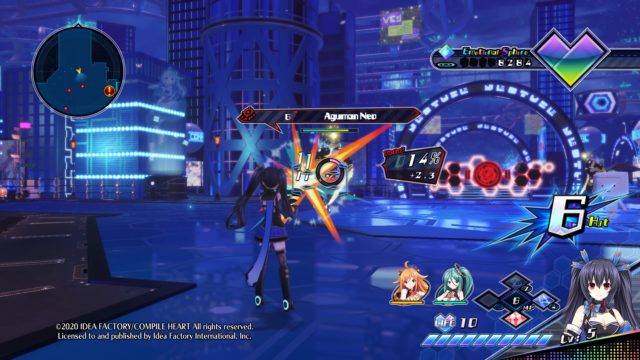 Neptunia Virtual Stars’ combat is not its strong point.

Rather bizarrely, Neptunia Virtual Stars has two different combat schemes for its characters, though both are action-based. The goddesses are ranged characters with only one of them active at any time, while the VTubers are made up of a melee and ranged pair with one controlled by the player and the other by the AI. Players are free to swap between the characters at any point, although when a second pair of virtual idols joins the ranks, only one pair can be utilised, with the other only available at save points. This difference itself already makes things way more confusing than they needed to be, including the goddesses and idols even having different HP systems, but the issues are compounded by the fact that, compared to the goddesses, the virtual idols are simply nowhere near as effective and combat with them is both annoying and highly unsatisfying.

Meanwhile, the goddesses’ combat turns things into a functional, if still largely uninteresting, third-person shooter. Nearly all enemies, including bosses, are unable to cope with the most basic tactic of circling the enemies while shooting at them, and the ones that are able to hit back are built in such a way that it feels like trying to avoid their attacks in the first place is a waste of effort anyway. It’s better to just use items to heal and blast through. This is only one aspect of the major issues with the game’s balancing. Rather than relying on player skill or tactics, the game’s difficulty is ultimately determined by character stats, which results in only one element actually mattering: assigning and upgrading V-Cubes. Though players will find themselves significantly below enemy levels by the end of the game, provided they’ve spent enough points upgrading their V-Cubes and are carrying a semi-decent supply of easily-obtainable healing items, the game is trivial. Boss fights attempt to include some synergy with the background music and a momentum meter, but given how the game is balanced, players are perfectly fine to just completely ignore them. 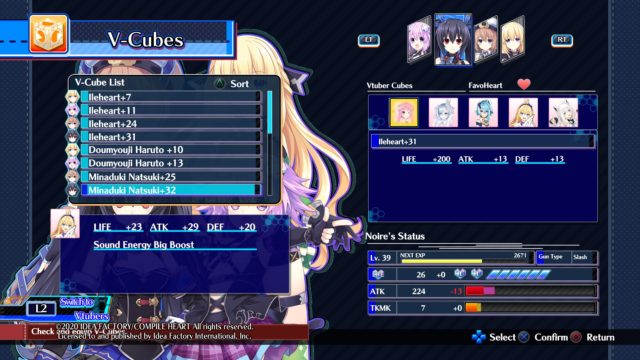 This screen is what determines how quick victory will be.

There are some skills and abilities that use MP, as well as a few special attacks, but the way the enemy behaviour and balancing mean players can readily get by without using any. There is some side content in the form of quests, but these are uninteresting and can be easily ignored as the rewards are not at all needed to complete the game, with the same going to bonus bosses and new areas unlocked after completing each dungeon. A BeatTik rhythm mini-game is present and completely optional, which is probably just as well because as rhythm games go, it’s really not a good effort.

Though the presence of the VTubers will attract some fans to the game, there’s likely to be some disappointment in how little they are ultimately involved. New VTubers and V-Cubes are obtained by defeating certain enemies, but the only one that has any impact on the plot is an original creation, with the rest reduced to acting as equipment via the V-Cubes or simply providing little cameo messages. At least loading screens are made more interesting, as each has a VTuber providing their own little message. There is a section of sidequests devoted to the VTubers, with more messages, but like with the other quests, the game offers very little in-game reason to look for or do them. 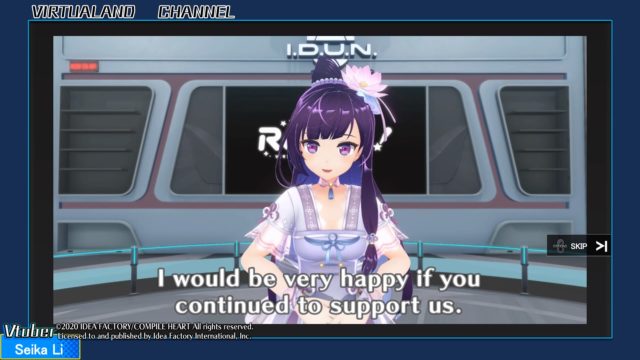 There is lots of colour and strong variation between all of the different locations players go through, but the otherwise the graphics aren’t strong. Animations are not impressive and the strange hit detection really detracts from how combat looks and feels. With the large numbers of Japanese VTubers appearing in the game, it makes sense that the game is only available in Japanese audio and the voice acting is perfectly fine. There are some songs used primarily during boss fights that are pleasingly upbeat and enjoyable to listen to, but the rest largely falls into the background.

Those looking to spend more time with the goddesses will at least enjoy more of their humour, and VTuber fans will likely get a kick out of their cameos. However, gameplay is very much lacking, with everything being done considerably better elsewhere, and ultimately, as an overall experience, Neptunia Virtual Stars remains a disappointment.