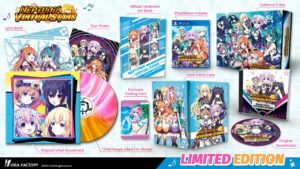 Neptunia Virtual Stars, known in Japan as VVVtunia, focuses on the realm of idols. The game’s story takes place on planet EMO, where the group of goddesses teams up with the virtual idol group called Mewtral in order to save the digital world known as Virtual Land. Neptunia Virtual Stars, which launched in Japan in 2020, is set to be released for PlayStation 4 and PC in North America and Europe some time in 2021.