Beware What Lurks Out There

There are a lot of things to admire about Mistover, and it’s an impressive title in certain respects. I never fell in love with it though, and rarely felt like playing it for long stretches without a break. Much of that stems from its somewhat rogue-like structure, which ensures resource management is always a high priority. There are aspects I think other games would do well to pilfer, but the game as a whole is not a newfound favorite of mine.

The setting of Mistover is a world which once saw enormously destructive conflict between gigantic creatures, but one day they vanished from sight. Figuring out precisely where they went is a priority just in case the entities ever come back, and they seem to have disappeared into several dimensional rifts. It is the job of adventurers to explore these rifts and learn what exists there, but as these locations are filled with unfriendly denizens, the task is not for the unprepared. 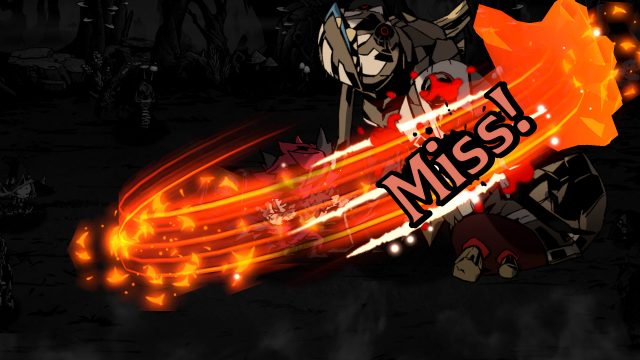 Context makes clear this creature is not seeking to address an unmarried woman.

Narrative is not the main focus of Mistover, and its relatively few NPCs carry the entirety of the proceedings. These characters have more personality conveyed by the distinct art style than the events in which they participate, though happenings become a bit more interesting toward the conclusion. Most of the tale serves as a justification for sending the player’s guild deeper into dungeons for exploration, though the strong localization at least ensures following along is not arduous. The player takes the role of a guild comprised of multiple interchangeable members who carry out missions, and correspondingly have no development whatsoever.

Guild members need to start trekking through randomly-generated dungeons to accomplish various tasks, most of which are fairly standard fare along the lines of finding specific materials or vanquishing threatening opponents. Traipsing around these locations will deplete both food and luminosity at each step; exhausting the former will start to cause HP to decrease, while exhausting the latter places the party completely in the dark with no way to discern what is one step away. Both can be replenished with supplies, either discovered randomly within the location or brought when starting the excursion. Searching for these commodities is dangerous given that enemies are also moving around though.

Adversaries move once on the map for each player action in keeping with rogue-like rules, at least until combat begins. Actual fights take place with each side occupying a 3X3 grid, where the techniques available to each participant vary dependent upon position. The selectable options change dramatically, forcing players to consider carefully whether a melee fighter should move to the back row in order to access other abilities. The opposition has the same predicament, and certain moves that forcibly alter where an opponent is placed can be very useful. 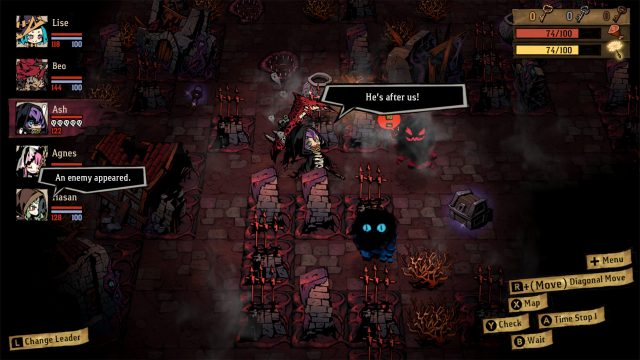 In yet another stereotyping of color, red monsters aggressively pursue while blue ones mind their own business.

Mistover has a far more intricate means of tailoring difficulty than simple overall challenge levels, and it makes the game worthwhile for experimentation. Players can choose such things as which status ailments apply, the frequency of traps, whether enemies respawn, the amount of damage inflicted and received, and how many skill points characters obtain when leveling up, among others. Such a wide range of customization helps ensure players can do whatever is preferred to maximize enjoyment, and should be embraced by other developers.

Other aspects of the interface are less positive. Equipment is found exclusively through dungeon exploration, and can only be equipped back in town. Getting useless pieces is aggravating when inventory space is limited, especially when weapons and armor are restricted by a character’s class and level. Sifting through the available options isn’t a quick proposition either, as multiple statistics are usually affected by each piece and the player needs to manually evaluate every possible alteration.

Certain aspects of Mistover make it challenging regardless of the difficulty options at play. Characters possess beneficial traits such as increased damage output if well-fed, but they also have jinxes with negative effects. These can be changed into something helpful by paying money in town, but require the player to pay close attention. New techniques for job classes can only be learned via recruiting another character of the same vocation, who will pass a new move along and immediately leave. As the party members are blank slates, losing one isn’t a grievous blow, but when they die permanently in a dungeon it can strand players in a rough spot. 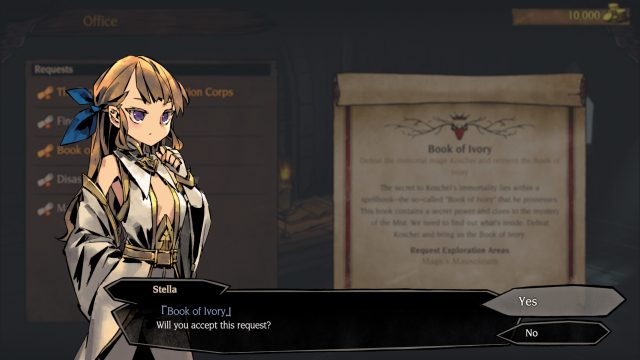 Decisions, decisions… though turning down the request is a very boring option.

Mistover‘s visuals are distinct, and this helps the game to stand out. The character and enemy art is impressive, giving a sense of what this world looks like through its fascinating designs. Other visual aspects are workmanlike without standing out much, though at least the dungeons are distinct enough to quickly differentiate each location.

A good variety of music accompanies the action, including different battle themes for each new dungeon area. Aside from the energetic combat tunes, most of the music is fittingly somber and does not stand out. Japanese vocal performances are heard aplenty, with the same clips during dungeon exploration and combat being uttered a bit too often. The vocal work itself is solid for the most part, and the sound effects heard while exploring are effective at enhancing the atmosphere.

Part of my muted reaction to Mistover is probably due to my inability to find a rogue-like that I actually enjoy. Borrowing so many mechanics from that type of game ensures Mistover isn’t going to capture my affections very well. Certain aspects are admirable and easy to appreciate without making me want to return to see what might await after the credits, which includes DLC for new foes and dungeons. Others in the potential audience will probably find it highly addictive.