South Korean developer Krafton is currently developing a Japanese style RPG for Steam and the Nintendo Switch named MISTOVER. James Han, a producer for MISTOVER, answers some of our questions and gives us a preview of the upcoming game.

Johnathan Stringer (RPGamer): Can you give a brief description of MISTOVER? What does it aim to accomplish and what sets it apart or makes it unique?

James Han: MISTOVER is a JRPG roguelike dungeon-crawler that mixes in elements of survival and strategy. MISTOVER is designed to give players constant tension and force them to make the right choices during the journey. It seems intractable, but nothing is impossible!

JS: You mentioned it is a roguelike dungeon-crawler. Can you expand some of the rogue-like qualities?

JH: Yes! MISTOVER has a lot of elements of rogue-like genre. The most important factor is permadeath. We want our players to feel like they are on the edge of a precipice and try to make the best decisions along with the gameplay to survive and save humanity.

JS: The marketing for the game says every move will change your future, and that the game can change based on your actions. Can you go into more detail as to what this means, and how the game is impacted or changed?

JH: Yes! MISTOVER’s world is on the verge of extinction and one wrong choice may prove fatal. In the expedition, every move will cost you HP and light. In battle, victory depends on what skills you use as it’s a turn-based battle system. Players might find themselves with different endings at the end of their journey. 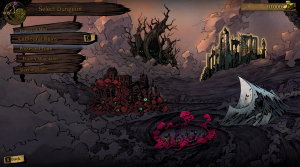 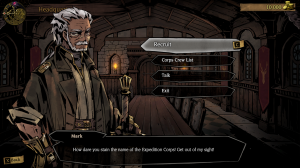 JS: The art and style remind me of Darkest Dungeon. Would that be an apt comparison, and was that game an inspiration?

JH: It’s true that we are very much inspired by Darkest Dungeon and Etrian Mystery Dungeon since they are beloved in many parts of the world.

However, we will have our own strengths such as unique expedition/battle with the element of the Mist and Light Flower, Curse Weapons from the permadeath, and full-voice scenario and characterful art.

JH: The Mist has a bad influence on nearly every part of the game, especially on characters, monsters, and items. Also, the Mist will block your view and make it harder for you to avoid monsters in your expeditions. You will have to find Light Flowers to light up your way, but it might cost your HP to do it. It will be your choice!

JS: The Steam page says: “Maps are always changing… practice different strategies in order to survive”. Do the maps change every time you visit an area, every playthrough, or while you are exploring? Are the maps generated randomly?

JH: All dungeons will be randomly generated based on the leader skills of eight Corps Crews, the mission goal, and the difficulty level. There are also five different regions, and each region will have randomized dungeons with various paths, portals, and maze traps such as poison, transparent, and respawn. There will be special types of environments and tiles that give you buffs/debuffs. It’s up to you to choose the right Corps Crew for the expedition.

JS: Your crew or “Corps” as they are described are said to be made up of eight different classes. Are these characters created, or recruited NPCs? Can you describe some of the classes and their roles?

JH: Players will be able to recruit Corps Crews from an NPC, and there are eight different classes in MISTOVER. You will build your own Corps Crew with five classes and make sure to balance offensive, defensive, and supportive classes. We are planning to release a review for each class soon, so please stay tuned!

We want to thank James Han for his time in answering our questions. We look forward to seeing more details about MISTOVER as development wraps up, and wish the team a successful release.