One nice thing about sequels to video games is the strong potential for doing things better. The original Dark Cloud was very easy to improve upon, something Level-5 did quite successfully in Dark Cloud 2. Not everything the game does made me giddy with joy, but the experience as a whole was entertaining enough that I’m happy to have had it — quite unlike its predecessor.

Initially the player is exclusively in control of a young man named Max, but will be able to switch to a young woman named Monica before much game time has elapsed. These two are called upon to march through randomly-generated dungeon areas while killing everything in the way until one of the corpses yields the item necessary to access the next floor. They don’t get stronger from killing these adversaries, but the weapon used to deal the final blow does, while its endurance is gradually reduced through wear. These elements are taken directly from the first Dark Cloud, but their execution has been greatly improved.

The wearing out of weapons through constant use has undergone one critical change from the first Dark Cloud to make it far less rage-inducing: broken weapons do not disappear in Dark Cloud 2. They must be immediately repaired to stop being a useless lump, but eliminating the possibility that hours of work could be undone through a moment’s inattention transforms this system into something entertaining. Developing the weapons through constant use and transforming them into more powerful tools of destruction is addictive, and a definite high point of the game.

The randomly generated dungeon levels are not the most exciting possible method of exploration, but nevertheless represent an improvement over the original game. Each level has a different goal to achieve, and while the reward is simply a medal that does nothing except feed the player’s ego, this helps distinguish the areas from each other. The selection of enemies shifts a bit between each floor, which also helps to keep the proceedings relatively interesting. Dark Cloud 2 does not possess a randomly generated dungeon model that is completely irresistible, but progressing through it is more entertaining than most others with such a formula. 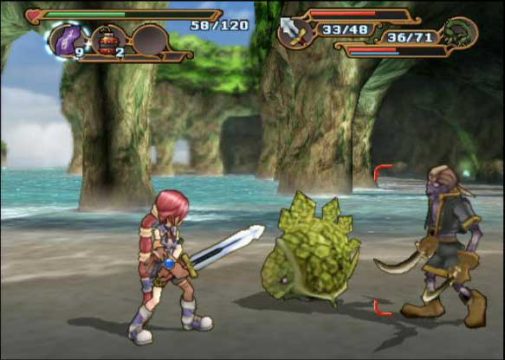 So a sword-wielding girl, an undead pirate, and the genetically engineered spawn of Gamera and Godzilla walk into a bar…

Combat is very similar to the first game’s, in that it involves either character getting close and bashing the enemy with a dangerous implement. Max and Monica each have a distinct ranged attack to keep the proceedings from revolving exclusively around close combat, plus the dungeons are littered with rocks that can be thrown onto enemy heads. The camera is pulled back a bit further from the character than in the first games, which is helpful in order to see the action clearly. Camera ailments are nevertheless a frequent malady of the game, either making close enemies invisible for a moment or obscuring walls that block character escape routes.

Dark Cloud 2 has several activities that can absorb enormous quantities of time should the player wish to partake in them. Max is able to take pictures of a huge hodgepodge of items in the game to use as ideas for inventions that will increase the available equipment considerably. He is also able to play something called Spheda that brings a somewhat-more-interesting-than-the-actual-sport version of golf into dungeons. Level-5 has helpfully made sure neither is essential outside of a couple of easily passed story moments. In terms of tangible rewards that help with completing the game, invention handily bests the glorified golfing, but both conceivably offer a means of wiling away many hours. Other possible time saps include an elaborate fishing game and a complicated means of making Monica transform into monsters, and both of these can also absorb quite a bit of time for those interested.

Another activity offered in Dark Cloud 2 is the Act Raiser-inspired Georama that its predecessor also showcased. This is mandatory to progress, and proceeds when certain items are found in dungeons to allow the reconstruction of towns. The process is rather more complicated in this game due to the need to make the parts with raw materials before placing them in the towns, and thus often becomes time-consuming when insufficient quantities are currently possessed. Aside from this grievance the Georama aspect is solidly entertaining, though the need to recruit people to populate dwellings from Max’s hometown instead of finding them in the dungeons can be annoying. The actual placement of the pieces is at least consistently enjoyable.

The plot propelling all this forward is a rather lighthearted take on the standard RPG scenario of an evil being with a vendetta against the world. Max is hoping to take in a circus that has come to town, only for the ringmaster to fixate on a glowing red gem the boy carries. After dealing with an onrush of evil circus performers Max meets Monica, who has traveled from 100 years in the future to reconstruct locales that have ceased to exist for her. It turns out a nasty creature 10,000 years ago named Griffon is trying to wipe out the human race, and eventually confronting him will be necessary to resolve the matter. 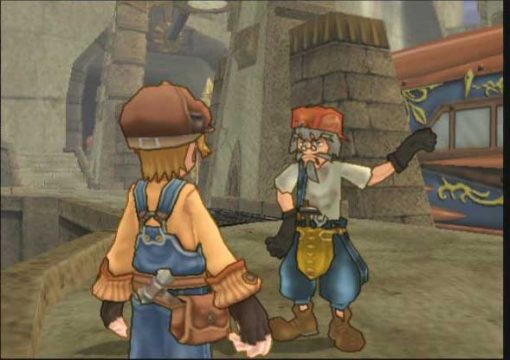 I wish you could take the ‘A’ train – but all we have is this.

Thinking much about the plot is a bad idea, but hard to avoid at times. Introducing time travel without even attempting to consider the inherent paradoxes of the matter makes large chunks of the story seem poorly thought out. Large stretches of the game are highly episodic with stories that do not intertwine with the larger narrative, making the amount of time devoted to them seem excessive when the attempts to flesh out the antagonists are given insufficient exposition. The characters are by and large a likable lot and the tale is not insultingly bad, but it is not the reason to play the game.

Cel-shaded visuals seem to have fallen out of favor in recent years, but Dark Cloud 2 demonstrates how eye-pleasing they can be. The dungeons employ enough variety in their visuals to avoid getting boring, character animations are distinct and appealing, every weapon has a unique look, and the enemies move fluidly. As for the audio, Dark Cloud 2‘s music is a mix of compelling and forgettable, while the voice acting is mostly solid without being superlative.

Leaving the considerable time that can be spent on side activities or additional dungeon diving aside, Dark Cloud 2 can be finished in under forty hours. Its dungeons nevertheless feel longer than necessary, cramming fifteen or twenty floors into the mix when ten would have done the job. Being able to save and exit the dungeon after every floor helps considerably, especially when the first game’s Dragon Quest method of being booted back to town minus half the current money has been replaced with Game Over upon defeat, but the core issue of spending too long traipsing through the things is hard to overlook.

Dark Cloud 2 is a mostly entertaining title despite its numerous issues. Level-5 definitely made a massive improvement over the first game, and seeing how much further improved these core ideas could become is reason enough to root for a Dark Cloud 3. Such a thing unfortunately seems to have been set on Level-5’s back burner for many years now. Dark Cloud 2 certainly didn’t captivate me consistently, but the good elements were worthwhile enough that I consider playing it time well spent.