Sony and Guerrilla Games posted a new development blog for Horizon Forbidden West. The new post provides some details regarding the settlements and tribes that Aloy will come across in the game.

The game will feature multiple tribes that Aloy can interact with, located in different parts of its setting. The Nora live in an isolated valley and are less technologically advanced as well as more wary of outsiders, with a hunter-gatherer way of life. The Tenakth have beliefs influenced by ancient ruins and are composed of three distinct clans, while the Utaru are laid-back and have an agrarian society built around their surrounding lands.

One of the first settlements Aloy will come across is the Oseram outpost of Chainscrape. It is in a place with plenty of natural resources and its inhabitants have come for reasons including fleeing problems, making money, and the simple thrill of adventure that it provides to explorers. The Oseram themselves are a patriarchal society.

Settlements in Horizon Forbidden West will act as hubs where players can find new weapons, outfits, and upgrades. Each will have unique merchants with whom Aloy can exchange shards and machine parts that she finds in her adventure. Aloy can carry up to six weapons at one time, and has the option to craft numerous useful items and upgrades with the machine parts, plants, and minerals that she collects.

Horizon Forbidden West is the sequel to 2017’s Horizon Zero Dawn and follows Aloy as she travels to the remains of the western United States to investigate a red blight that is wreaking havoc on the environment and weather. The game will be released for PlayStation 5 and PlayStation 4 on February 18, 2022. 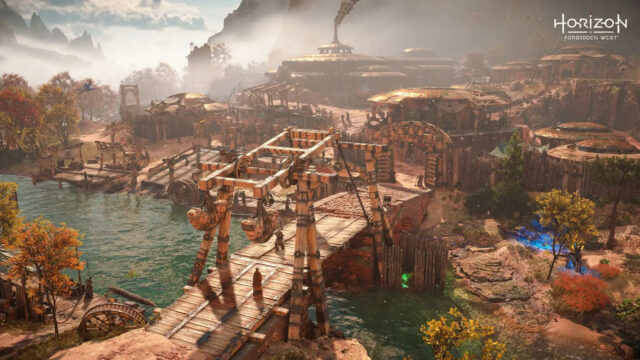