Why Did Ya Date Me? Dragon Quest V Edition

We don’t know about you all, but we love dating elements in RPGs. We often gravitate towards games that allow us to pick a romantic partner. Picking who you date in an RPG can spark big debates, but also bigger friendships. “Why Did Ya Date Me?” is a feature for those of us who want an excuse to fangirl our RPG crushes, and justify our choices. This month, the game of choice for debate was Dragon Quest V and its various remakes. Let’s see who the most datable choice was among the RPGamer staff! 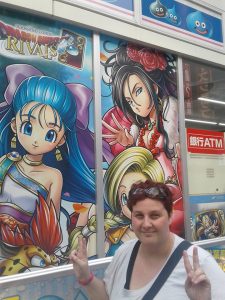 Some choices in life are not easy. Choices such as what to eat for breakfast, what to wear on a cloudy day, or which one is your favourite Pokémon. But there are also choices that are so easy, you just don’t need time to think about it. It makes you wonder if it even was a choice to begin with. That is how I felt when I chose Bianca as my wife in Dragon Quest V.

Could be, but the biggest reason to marry her was not in her personality. It was in her hair. Because I knew that our offspring would have her lovely golden hair. Which means that my son will look like Gohan from Dragon Ball Z. Not just a Gohan, but Gohan in his Super Saiyan 2 form. And that would make me the proudest dad alive. — Erik van Asselt

I picked Bianca. Childhood friend or bust. I don’t have a deeper explanation than that; if given the choice I’m always going to go for the person I (or the character) have the most connection with. — Corey Scoggins

I initially played the PlayStation 2 version of Dragon Quest V, which only had Bianca and Nera (Flora in Japanese). I chose Bianca for a variety of reasons: her lovable personality, blonde hair, the shared experiences of childhood, and her offensive magic. She also seemed like the best choice for all characters involved, as this provided the happiest outcome when you visit them later on.

Nera had a lot going for her, too, but she already had a love interest. When I played through the game a second time and chose her, I felt bad for the consequences. I drove a wedge between her and her already-established love interest. I felt even worse when I visited Bianca later, who was still single and lonely. — Elmon Dean Todd 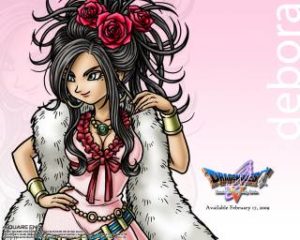 Video games are all about having fun, right? Real life is where childhood friends grow into love interests and then into spouses. In real life, Bianca would be the rational choice. But Dragon Quest isn’t real life. It’s a world inhabited by slimes big and small, and every other monster and every other town is named in such a way as to make an awesome pun. It’s with this desire for a funny, punny time that I can no longer pick anyone other than Debora. She’s the firecracker choice. She’s the one that will insult you and step all over you and be a complete jerk, but deep inside she’s falling in love! While she begins marriage at the top right of the crazy/hot matrix, she glides slowly down into the wife zone after a fair amount of journeying. While she’s perhaps not the most useful character in battle, you’re not getting with her for that reason. It’s all about the jiggle! — Matt Masem

I adored Dragon Quest V: Hand of the Heavenly Bride, if only because of Debora. Debora is nuts. She totally wears the pants in the relationship, and there’s no fighting her on that. Debora is the hothead, knows what she wants, and is a stay-out-of-her-way kinda gal. While Bianca and Nera are far more logical choices for a good wife, I always love choosing the more unexpected woman, one that is going to keep me in line but deep down loves me with everything she’s got. Debora is funny, and as the game progresses, she truly takes the role of wife very seriously. — Sam Wachter 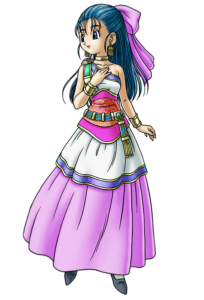 I may actually be the odd one out for this feature, as I actually purposefully did a playthrough for the simple reason that I wanted to see how each of the three differed. Of all three my personal favorite were Nera and/or Debora. Bianca is a fine choice, but I’m just not into blondes overly much.

So why did I choose Nera? Traditionally in Dragon Quest, most of the leading protagonists have had blue hair. So keeping up the tradition of a blue-haired hero is a fun little tribute to the game series. Nera also is a strong choice for a primary healer, which frees up both children to be damage dealers if you are running them as part of your main party. Nera falls into the category of “typical wife”: caring, sweet, tries to take care of house and family. There is nothing wrong with this portrayal although it can be a controversial treatment of a woman.

Debora on the other hand is very much a tsundere, treating the main character as a slave. But there are times where her true emotions come out, and though rare it’s an aspect of her personality which can help endear others to her. She is much more an offense character then her sister and if equipped with her personal weapons she can act as a decent front-line attacker since she attacks twice per turn. Although this turns the actual hero character into the healer of the group (barring monsters) so she would definitely be the choice for those who may want a little bit more of a challenge when it comes to healing output of the party. Overall though, I feel there is no wrong choice with any of the three, and it really comes to personal opinion. Again, just not that into blondes. — Robert J. Albright

We hope you enjoy reading about our dating picks from Dragon Quest V, let us know who you romanced! Tune in next time to see who the most datable character is in Persona 5!