Sophie in the Dream with Sparklies

Picture yourself on a path in a forest, when what might you ahead of you spy? Amidst all the brush and the green of the foliage, a tree rises up to the skies. An eerie void formed of stardust and dreams opens right up in the air. You reach for the hand of your best friend but find out she’s gone.

So begins Atelier Sophie 2: Alchemist of the Mysterious Dream, with Sophie and her mentor Plachta pulled through a strange portal in front of an arboreal giant. Sophie awakens flat on the ground before an identical tree, but the rest of the world is different. Soon she learns that this strange new place is Erde Wiege, a timeless realm apart that exists in the space between dreams. Here people are drawn from across time and space so that each may fulfill their dreams. But no matter where she looks, Sophie cannot find her master, the five-hundred-year-old disembodied spirit in a doll’s body. Instead she finds an entirely different Plachta: a sixteen-year-old alchemic wunderkind with a chip on her shoulder. This provides but one of many interesting character dynamics in the game.

From a writing standpoint, Sophie 2 is one of the best paced and cohesive tales the series has seen in recent years. Atelier games are often based more on personal goals and achievements than the fate of the world, which is where the first Sophie game came up short: It tried to take the standard model and shoehorn a grand threat in at the end. Sophie 2 flips things around by using the personal goal, the search for Doll Plachta, as the hook to help introduce the world of Erde Wiege before building up a grand threat whose roots run deep within the idyllic realm of dreams.  While it is a direct sequel, the narrative does not require the player to be familiar with the events of Atelier Sophie: Alchemist of the Mysterious Book beyond the bits of key exposition in the beginning. Occasionally one of Sophie’s friends from Kirchen Bell in the real world will be name-dropped, but never without necessary context. And for newcomers, the in-game guide has entries for the cast of both titles, updated whenever a new item or factoid is presented. 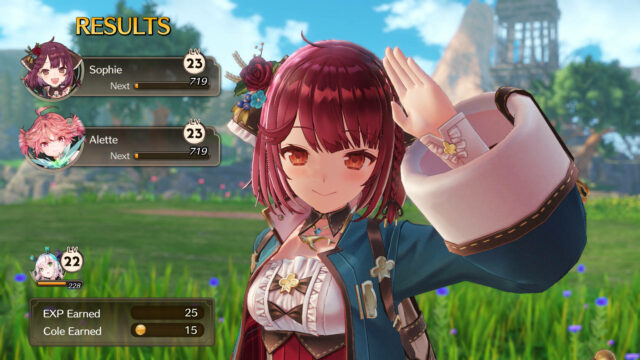 Howdy, nice to see you again.

Around the time this game came out, I posted an impression on the site, and Sophie 2 did not lose one quantum of charm even as I played it to excess. Most likely I could have finished it ten to twenty hours earlier than I did, only I just had to explore all the optional side-zones, take on the strongest monsters, and further the personal plots of the main cast in order to see what happened next. The principal cast of named characters are all well written and fleshed out, with individual motivations and ideals that are well represented in the in the localization.

Synthesis is always a core element to games of this series, and Sophie 2 does not alter the formula too much from its predecessor. When making an item, the player is presented with a five-by-five grid, into which they must place the ingredients. Each item in the recipe can have between one and four polyform shapes of various sizes. Special nodes in each shape can link together, increasing quality and boosting color-element levels to unlock traits in the final product. New to the sequel are special catalyst items that, when upgraded fully, allow for individual powers and advanced alchemy tricks such as flipping the shapes as well as rotating them, being able to overwrite individual nodes without deleting the entire shape, and expanding the grid to a maximum of seven-by-seven spaces.

As Sophie has landed in Erde Wiege with only the clothes on her back, no notes or books to consult, she must rely on the things she finds or the monsters she fights in the world to jog her memory and inspire new alchemic recipes. Many of these ideas for items are gated behind other items or available after specific plot beats, and the conditions for inspiration are not retroactive. It may be necessary to fast-travel back to earlier locations to find materials that Sophie already has in stock, or to make specific items one more time so that the metaphorical light bulb goes off over the heroine’s head. It’s not a perfect system, but it does a good job of accounting for Sophie’s experience in the first game even as she has to begin anew in the second. 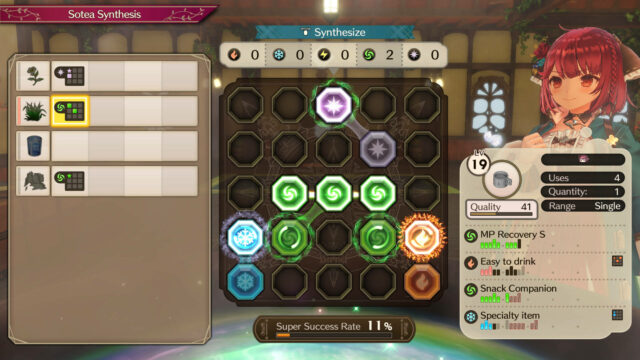 Tab A into Slot F…

Also reflective of their past experience is the fact that Sophie and friends all start at the previous game’s level cap of 20, if not higher, while Sophie’s alchemist level begins at 50. Supplementing this is a point-buy ability system that lets party members purchase stat boosts and gathering bonuses at fixed rates. Points for the system are gained by leveling up, fulfilling character quests, and locating key landmarks. There are more areas to explore in the game than are actually necessary, with their own challenges and secrets, and the game is good with rewarding the effort to go look at stuff.

Combat is one area in which Sophie 2 shows clear improvement over its predecessor, with several interesting subsystems adapted in from other games of the franchise. On the enemies’ side, many monsters have specialized auras that both defend against direct damage and react when struck with the wrong sort of attack. Avoiding these counterattacks and breaking auras is straightforward enough, but also requires some tactical planning in battle. Standard attacks may do little damage against this, but with a bit of alchemy weapons can be improved to provide a greater number of hits, and some characters learn secondary skills to further boost damage to auras.

As the attacks fly, a gauge fills on the left, and points from that gauge can be used to call in allies from the back row for defensive maneuvers or to initiate Dual Actions. These coordinated attacks allow a character to swap places with someone on the back row, giving both the chance to attack with either items or with skills at a reduced MP cost. This has the benefit of making all the first-level attack skills virtually free with some strategy, and it’s one way in which this game actively encourages the player to make use of the fun attacks with regularity. Beyond that, later in the game Dual Trigger powers unlock. These powerful co-operative assaults can be activated when their special gauge reaches 100% or higher, and it builds by ten percent with each Dual Action or emergency defensive block used. More importantly, points on the gauge up to 100% carry over between battles, allowing the player to stock up and enjoy the pageantry of massive damage dealt to enemies all the more easily. 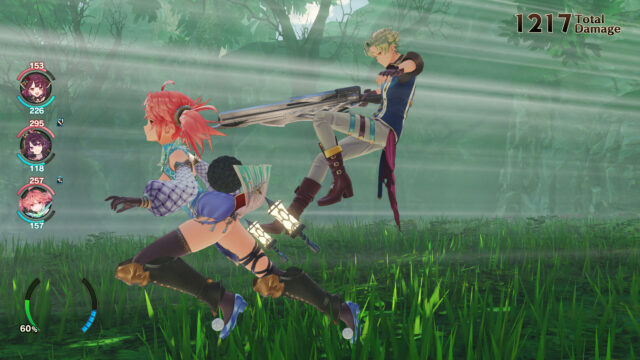 Being a world formed from the visions of people’s dreams, Erde Wiege has a broad variety of styles to it, aided by some adroit asset recycling and little graphical flourishes to provide a consistently interesting backdrop. The dungeon-esque zones are visually distinct from all else, and things change even more with alchemy-induced shifts in the local weather. One of the more interesting visual elements was the inclusion of obvious graphical glitches in areas existing outside the normal bounds of the world, with entrances like holes in five-dimensional glass.  It’s a nice backdrop for Sophie to wander through and explore, though the fast-travel nodes are a welcome convenience. Due to how the different areas interconnect, it’s possible to walk an entire circuit around the map of Erde Wiege without any fast travel if one feels like having a stroll, however.

Musically, while Sophie 2 does not hit the creative heights of the Dusk trilogy, it still does well for itself. Many of the regular tracks hearken back to the traditional Ren-punk sound of earlier games, with occasional interludes of awesome. The Thunder Palace’s theme is one of note, with some haunting vocals, and the ending theme song, “Planisphere”, hits all the right notes. Unfortunately for non-Japanese speakers, this game does not have a dub in any other language. More fortunately for students of Japanese, the original voice acting is clear and easy to follow — enough so that it makes the localization efforts that much more appreciated. The text translations do not follow the original-language dialog as closely as they might, instead presenting a proper voice for each character in choices of vocabulary and phrasing. Combined with the physical body language, this helps the main cast of characters feel like actual people.

Atelier Sophie 2: Alchemist of the Mysterious Dream would seem to be the very definition of a sequel which no one wanted. The Mysterious trilogy as a whole received a mixed reception, and not much more was expected of this. And yet, what we’ve got here is a well-crafted narrative in an original setting with a cast of properly developed characters and a plot that actually knows where to find the beat. When I started this game, I was not expecting to find the best Atelier game of its generation, but the development team at Gust has proven with Sophie 2 that they can learn from experience, leveling up in knowledge and skill just as the alchemists do to provide a more polished product.