Atelier Sophie 2: The Alchemist of the Mysterious Dream Announced

Atelier Sophie 2 continues the adventures of alchemist Sophie Neuenmuller and her friend/teacher Plachta. After leaving Sophie’s home town, Kirchen Bell, the two discover a tree that Plachta has seen in her dreams. Approaching the tree, they are pulled into a vortex, with Sophie awakening in another world called Erde Wiege. She hears about an alchemist named Plachta, but when she meets her she discovers a younger version of Plachta who does not know who Sophie is. 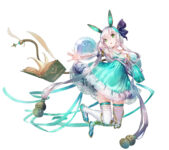 As Sophie searches for the Plachta that she knows, she is joined by another aspiring alchemist called Ramizel Erlenmeyer. The two, and other allies they meet along the way, travel across Erde Wiege facing off against monsters. The game will feature seamless transitions between exploration and combat and battle parties of six members. The six members are split into a front row and back row of three members each, with the two rows forming cooperating teams. Atelier Sophie 2 will build upon the Mysterious sub-series’ panel synthesis system where players place materials into panels to create items.

Atelier Sophie 2: The Alchemist of the Mysterious Dream is set to be released for PlayStation 4 and Nintendo Switch in Japan on February 24, 2022, and for PlayStation 4 and Nintendo Switch in North America and Europe as well as PC worldwide on February 25, 2022. A $119.99 Limited Edition is available to pre-order from NIS America’s online store that includes a physical copy of the game, an artbook, a soundtrack CD, a B3-size fabric poster, a whale necklace keychain, a new costume for Sophie, and a collector’s box.