The October 8, 2019, release date draws near, and the game’s PAX West demo suggests a vibrant mix of platforming, turn-based combat with timed components, and heroics

Indivisible has been on my radar since its Indiegogo crowdfunding campaign was announced. Hand-drawn animation, a diverse cast, and combat inspired by Valkyrie Profile? Two tickets, please! The October 8, 2019, release date draws near, and the game’s PAX West demo suggests a vibrant mix of platforming, turn-based combat with timed components, and heroics. Still, it’s best to leaven hype with some doubt. Nothing can ever match the dreams you’ve created in your mind. Breathe, smile, and look within yourself.

Ajna, Indivisible‘s heroine, is on the trail of vengeance. As she travels the world in search of those who wronged her, she absorbs allies with diverse backgrounds, abilities, and inspirations into her mindspace. My favorite allies from the demo were Baozhai, a brash pirate queen with functioning cannon epaulets; Razmi, a creepy tiger shaman with a penchant for flames; and Ginseng, a plucky apothecary. Ajna visits her allies by meditating to access her inner world. Building an inner arsenal of heroes scratches my army-and-castle-building itch; the demo let me talk to my inner allies, but sadly not recruit new ones. Some provided services like training battles and different ways to improve my party’s strength, while others commented on Ajna’s journey. 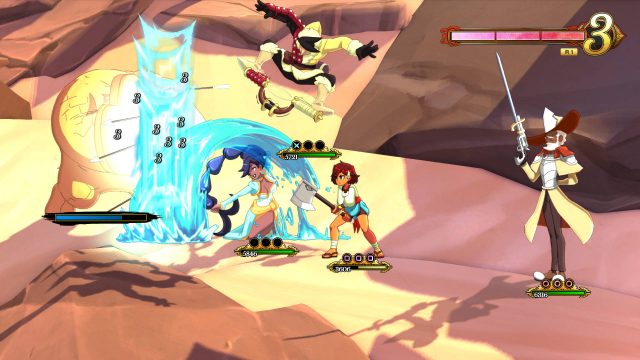 This slice of the journey took place in Tai Krung City, about eight to ten hours into the game. Spinning prayer wheels generated electricity for the cramped slums, making it look and sound like a Legend of Korra gangland. After meeting some of the local color, Ajna ran into Ginseng’s parents, who let us know the city was in bad shape because of the drug kingpin Mara. Crashing his club and trashing his flunkies would help sole the problem — but getting in required a fake ID or a dazzling series of acrobatics. During these scenes, Ajna is comically naive. Her absorbed companions heckle her and provide advice, with the sterling vocal cast showing their chops. The world is dark, but it can also be very silly.

Breaking into the club required a variety of platforming skills, including shooting arrows, sliding, wall-jumping, pole-vaulting, and pogo-sticking over electrical hazards. Jumping into an exploration-focused game without prior exposure to the move set is a good way to feel like a fool, but I was able to muddle through the controls. Bashing down doors felt more challenging than intended, but by the end of the demo I was making challenging-yet-fair jumps. As I scaled the heights of Tai Krung City and plowed through a string of local businesses, I wanted to interact with many of the scenes happening in the background. However, interaction is focused on platforming, spirits in Ajna’s mindrealm, conversations, and battles. 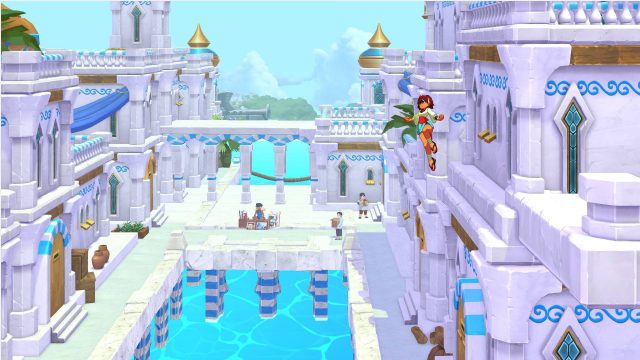 Battles are exciting blends of strategy and timing. Each of the face buttons launches Ajna or one of her three companions into battle. During the attack phase, each character except the healer had three charges, which controlled how many times they could attack. Timing an attack just right increased its damage. During the defense phase, blocking operated on a similar system. Character animations were colorful and varied, demonstrating little character quirks as the battle progressed. None of the battles were especially challenging, but it was early enough in the game that this may have been intentional.

Indivisible is definitely a title to watch. It feels fresh and exciting, while still hitting enough of the Valkyrie Profile and Castlevania nostalgia buttons to earn sweet, sweet bonus multipliers. However, as with all things, Indivisible is transitory. Glory is fleeting, but it sure feels good.