One of the surprises to come out of The Witcher 3: Wild Hunt was the popularity and depth of its Gwent card game. Already forming a substantial mini-game, Gwent is now a fully-fledged release in its own right. With the full launch of the standalone Gwent title after over a year in beta, CD Projekt Red has also released a standalone single-player story campaign titled Thronebreaker: The Witcher Tales. Thronebreaker gives those into the card game a good opportunity to test their skills and earn a few new cards and bonuses, while also offering an interesting way for those more into the narrative side of The Witcher the chance to enjoy more time in the world, though it never manages to portray the best of either element.

Thronebreaker: The Witcher Tales is set during the Second Northern War — around the same time as the book series and prior to the trilogy of Witcher games — as Nilfgaard once again looks to assert its dominion over the northern kingdoms. The game follows Queen Meve of Rivia and Lyria as she finds her lands beset by the invading forces, having to deal with opponents from both outside and within if she is to retain her crown. She ventures with her army and loyal advisors through first her own lands and then the lands of others as she seeks allies and the opportunity to drive off the invaders.

Fortunately for those coming into Thronebreaker primarily for more Witcher narrative, the story is strong. Meve is an excellent protagonist and ably supported by her advisors, who in turn get plenty of characterisation. The Nilfgaardians, along with those who support them, prove to be good antagonists and help drive Meve’s journey through ups and downs. The overall story is an engaging one, with the audiobook-style storytelling working well thanks to strong performances from all of the cast. 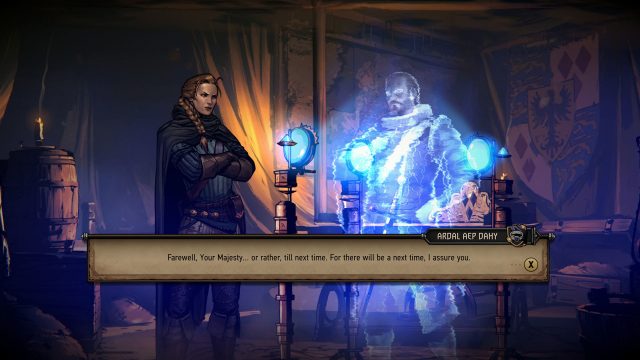 Well, of course, or I doubt this scene would have made the cut.

There are some misgivings, however. Because of the way exploration is handled in a top-down/isometric hybrid view, it’s difficult to feel very involved in the world. Meanwhile, though the narrative does its best to describe the horrors, reducing encounters with the series’ supernatural beings and terrifying creatures to a card game removes a lot of the intrigue and terror. A lot of the elements of the world are now familiar to those who have played any of the games and, though there’s a few interesting tidbits to be found in the dwarven nation of Mahakam, Thronebreaker does very little to add to any of them. Thronebreaker has its moments of great writing but the world building isn’t quite at the same echelon as the RPG trilogy.

Choices provide some interesting consequences — some immediate, some affecting an event later down the line — though the majority are more about selecting a preferred trade-off of the resources used to upgrade the camp and purchase new cards. Many of the required story companions play significant roles in the choices and Meve’s actions can have huge impacts on whether they survive to the end, and these form some standout role-playing moments. There are other optional companions that are met and can be taken along, but they mostly serve as providers of extra, optimal choices in resource-related events later on. It’s interesting to occasionally see an immediate positive consequence perhaps accompanied by a negative future one, but it’s more of a passing interest than anything substantial.

The aforementioned resources come in three groups: gold, wood, and manpower. These are mostly gained through a mixture of choices and gathering points scattered throughout the map. There are various hidden chests also scattered around where players can pick up things solely used in the multiplayer Gwent title, which only serve to highlight that actual encounters rarely give anything useful to the player within Thronebreaker itself. Outside of certain event scenes and choices, these resources are primarily used to either upgrade Meve’s camp or the create new cards. Upgrading the camp confers bonuses: upgrading existing cards, unlocking new ones, boosting the maximum value of cards that can be included in the player’s deck, and so forth. Players are able to freely adjust their deck with the only restrictions being a minimum card count and maximum total value that starts off restrictive but doesn’t provide much hindrance once upgraded a couple of times. 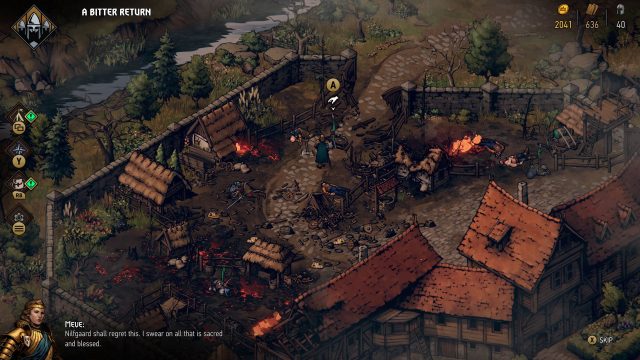 Meve could be referring to either the atrocities, or the tactical blunder of leaving piles of resources everywhere that she can make new cards with.

Thronebreaker: The Witcher Tales may be a spin-off to Gwent, but the game distances itself by letting players make the card game entirely optional with its Adventure Mode. Should players lose an encounter in this mode, or simply forfeit at first opportunity, a simple button press just lets them skip the battle and carry on as though victorious. For those who are frustrated by difficulty roadblocks or simply not that into card games and just want to enjoy the strong narrative parts, this is a very welcome option, but it also feels like a tacit admission that the card game really isn’t that important.

This makes Thronebreaker a bit of an odd one to review, because opinions of its aspects will vary depending on how important Gwent is to the individual player. As a card game, Gwent is certainly a very strong one with an interesting ruleset. Players start out with a hand of cards and can play one card from it each turn. The field is divided into four rows — each side having a melee row and a ranged row. Cards have point values and may have effects that apply when played, such as damaging an opponent and reducing its point value or removing it entirely, but they may also have effects that are applied on the player’s command or whenever something else happens. This leads to a lot of potential strategies as cards build on the actions and placement of others. A standard game of Gwent features three rounds, the winner of a round being the side that has the most points left on their cards after each side has passed or cannot play any more cards. Some additional cards are drawn at the end of a round or if another card permits it, but considering how many resources to use in order to win a round is important; there’s no use going all out in the first round if it means leaving the player unable to win one of the next two.

However, a lot of Thronebreaker’s encounters, which are not small in number, especially if players want to explore the maps for readily-displayed provisions, are not standard Gwent matches. Some will involve special tasks, such as defeating a particular enemy card, while there are many puzzle-style encounters that task players with playing a specific hand to create a desired end-state. The effort that went into making different encounters to try and mix things up is apparent, but the general experience remains the same. In addition, the high frequency of requiring players learn a whole new set of cards for them often makes for an irking time for those who aren’t fully invested in everything Gwent-related and just want to get to the next story event. In the end, it is likely that those already into Gwent will enjoy all the different ways the game is used, but for others the encounters serve as padding before the next part of the story. 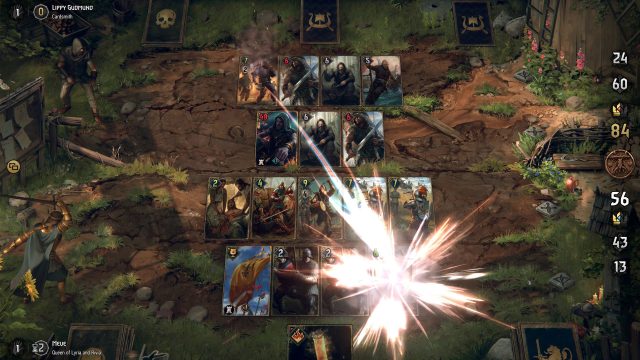 Thronebreaker is an unusual card game, where the card game part is completely optional.

The deck-building aspects of the game are enjoyable, but limited in scope and necessity. The cards available are only those thematic to Meve’s forces, and there isn’t much need to spend time perfecting a deck as simply adding the cards that are given freely creates one powerful enough for nearly every encounter, especially given that a large percentage only require players to win a single round. It’s a good way for newcomers to get used to the idea of building a deck, but the lack of options compared to the main game likely won’t impress veterans.

Thronebreaker’s controls are simple and effective, working equally well with using a mouse or a controller. The effects on the card game are nice as well as the animations on the character portraits in conversations. However, there’s no attempt to visually convey any of the action that takes place, which is basically reduced to a quick after-action report. There’s good use of colour on most of the maps in the game, but there are very few memorable locations within any of them. The audio is strong, as mentioned earlier the voice acting does a fine job on both the narration and dialogue, with pleasing if unspectacular music and sound effects in the background.

Thronebreaker: The Witcher Tales is unlikely to create masses of new fans for Gwent, and its adventure mode effectively admits this. However, it allows those looking for an entertaining tale to enjoy one without letting CCG elements and other gameplay elements get in the way. Meanwhile, fans of Gwent should appreciate the opportunity to apply the game to a wider adventure and be tested with the special scenarios. To those ends, Thronebreaker is a worthwhile endeavour that will please many, if perhaps not delight.