A Buy Three, Get One Free Kind of Deal

There was a certain kind of RPG, popular in the last console generation, that has seen it’s presence in the gaming sphere diminished over the last few years. These regular stalwarts of these games, most notably BioWare and Bethesda, have had output reduced by longer development times or seen a shift in focus. These lavish productions in the vein of Mass Effect and Elder Scrolls didn’t disappear, but with the advent of titles like The Witcher 3 — which sacrifices role-playing complexity and depth for a strong central narrative — and the rising prevalence of inserting RPG mechanics into every genre under the sun, games built by prominent studios sold first and foremost as “RPGs” are a rarity. Which is why Obsidian Entertainment’s The Outer Worlds was warmly welcomed. It’s not a groundbreaking game, it makes no attempts to reinvent the wheel, and many of the things it sets out to do feel half-baked, but its a pleasant experience that I wish this generation had offered more of.

Awakened early from what was supposed to be a trip to the unexplored bounds of the galaxy, the player finds themselves indebted to the Phineas Vernon Welles, an eccentric Doc Brown-type who enlists the player to find more of the substance needed to wake up the rest of the in-stasis crew. Additionally, he also asks that the player work to destabilize the Halcyon region in order to disrupt the power of the corporation that runs it. With not a minute to spare to ask questions, the player is dumped onto the Emerald Vale, a small outpost city under the control of Spacer’s Choice, a faction of the Halcyon Board that runs the nearby city of Edgewater. Several comedic mishaps and gunfights later, the player comes in control of a ship and the wide world opens up. 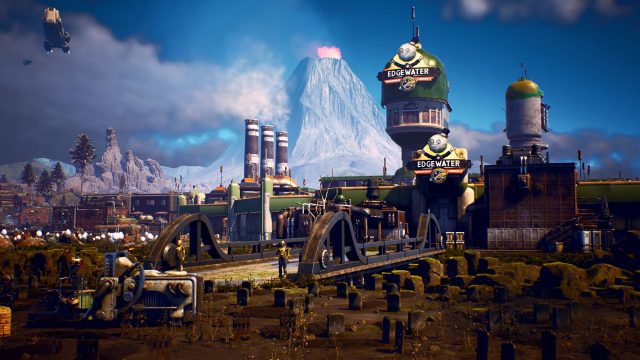 Edgwater is the first and perhaps best example of how runaway corporatism has ruined basically everything.

Wide to an extent, that is. The Outer Worlds is not a large game by any means, but this often works to its advantage. The ship, the Unreliable, serves as a hub for companions and as the travel system to the game’s different worlds, but no time will be spent exploring the vast swaths of space. Instead, each of the game’s planets and other non-terrestrial locations are given more room to develop. Many of the cities feel densely packed in a way that keeps them from being stale and repetitive, while the open areas are kept to reasonable sizes that never feel like a chore to traverse while having distinct points of reference that makes navigating them simple. In a time when many games buy into the idea that bigger is better, The Outer Worlds cuts through a lot of the chaff to deliver an experience that gets to the point.

However, in its place the game engages in far-too-frequent, perfunctory bouts of combat. Here is where The Outer Worlds borrows liberally from modern Fallout titles. The first-person combat offers various pistols, rifles, shotguns, and melee weapons to utilize, each governed by different stats within the game. Rounding this out is Tactical Time Dilation, a limited-use slowdown effect that acts as a V.A.T.S. equivalent. Tactical Time Dilation offers a bit more than V.A.T.S., allowing plenty of time to line up shots and assess the current combat situation. It’s also during these periods where attacking different weak spots can induce appropriate status effects, granting an additional element of crowd control. But combat in The Outer Worlds feels limiting and, eventually, stale. Even with the inclusion of perks and companions, combat rarely rises above serviceable. This is sufficient enough for a time, but by the end of the game gunfights tend towards rote rather than exciting. The game’s failure to make equipment interesting — there are few variations on each type of gun and upgraded versions of each alongside some unique ones gained from side quests — doesn’t help, as weapons used early on will largely be the same ones used at the end of the game, merely with the numbers cranked up. Armor doesn’t fair much better, providing an assortment of protection that all falls in a very limited range between a Firefly junker or a generic space marine. There are plenty of opportunities to talk instead of fight, but the longer the game went on, the less patience I had for its tiresome combat. 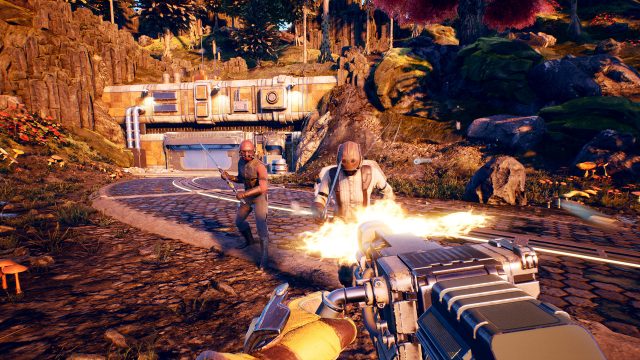 The Outer Worlds is the type of game where people can bring swords to a gunfight.

Character creation feels a lot better, if not perfect. Six stats influence the game’s many skills, each divided into seven categories. Leveling gives plenty of skill points that make the early game pretty interesting as there is a lot of room to experiment. Later in the game it is far too easy to have plenty of high-leveled skills that can end up trivializing most encounters, especially since non-combat skills offer at least a token combat benefit. This is a good thing in theory, in practice it can make most of the combat encounters feel superfluous. The actual underwhelming part of character creation comes from Perks. Perks are entirely functional but lack any sort of creativity or appeal. They mostly offer either flat bonuses or slightly better situational bonuses. Perk points come at every other level but can also be gained through quest rewards and Flaws. Flaws are a really fun idea, granting Perk points in exchange for a permanent debuff brought along by repeated abuse. For example, suffering too much fall damage gives the player a limp and decreases maximum movement speed. If only the Perks were more interesting the system would be perfect.

The companions are where The Outer Worlds shines brightest. There are six to be found throughout and, while all entertaining in their own way, Parvati is truly a exceptional partner who’s popularity is likely to outlast the game itself. Their interactions with each other aboard the Unreliable, the ship and hub of the game, give a good glimpse at the characters and gives the ship a homey feel. Mechanically, the companions have truncated perks and a unique ability tied to a cooldown, but more often than not the companions don’t feel all that useful in combat. There are builds out there that can utilize them but companions were used mostly as fodder to eat hits in between activations of their ability. But their presence and the enjoyment highlight how much games like The Outer Worlds have been underrepresented this generation. 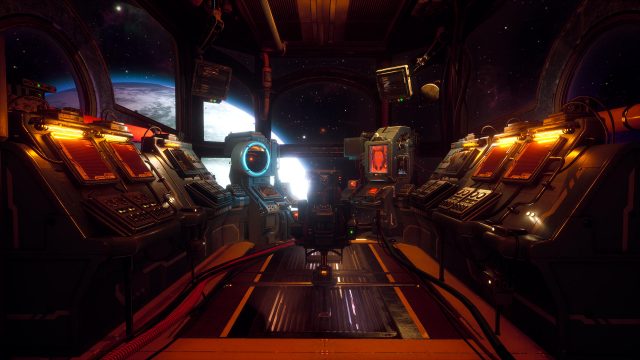 The cockpit of the Unreliable, which hints at a much larger universe you can’t see in the game.

Obsidian is usually great when it comes to crafting intriguing plots and meta-contextual narratives, but this time around there’s nothing too interesting about the story and the game’s humorous tone — which often repeats the same joke over and over again — isn’t enough to keep the proceedings entertaining. It’s as if jokes took priority over making things more interesting to explore. The points the game has to make are generally considered, but they’re just all very surface reads. On top of that, the game’s choices don’t feel particularly consequential, as if would not change much between playthroughs if different paths were followed. In spite of this, it’s a game that aims to evoke a specific feeling, a weird amalgam of previous-gen BioWare and modern Fallout titles, and it mostly succeeds in this regard.

Visually, the game’s budget shows, but its far from an ugly game. The voice acting is pretty great all around even while the music of the game manages to leave no impact. The PlayStation 4 version of the game was also rough around the edges, crashing a handful of times during the thirty hours it took to get through the game. Load times are also quite lengthy, an issue exacerbated when needing to switch planets, which require a loading screen to and from the ship in addition to the new location every time the locale is changed.

What probably best summarizes The Outer Worlds is that, in spite of my qualms with aspects of it, I still enjoyed my time playing it. It doesn’t overstay its welcome and by the fills a void that feels wider in the wake of many larger western studios losing interest in making dedicated RPG experiences. It’s not the kind of game to stand the test of time and Obsidian has made much better and more interesting games in the past, but there is a pleasant experience to be had. For those looking for that style of single-player RPG will find a lot to like and could do a lot worse.