Welcome to the planet Monarch. It’s been a long trip, stuck in cryosleep. We hear you might’ve suffered some brain damage because of it, and hope that at least something useful — say, the ability to slow down time to help in potential violent altercations — came of it. Please don’t mind the mutants or savage creatures roaming the landscape; don’t bother them, and they might not bother you. Enjoy your stay.

When Obsidian Entertainment announces a new choice-driven open-world RPG, expectations run high. The Outer Worlds wasn’t announced all that long ago, but still we were able to check out a lengthy demo consisting entirely of gameplay. The quest being shown off revolved around the protagonist being sent to a nearby Boarst meat factory, to find and eliminate the unsavory Clive Lumbergh, the self-proclaimed Boarst King of Monarch. 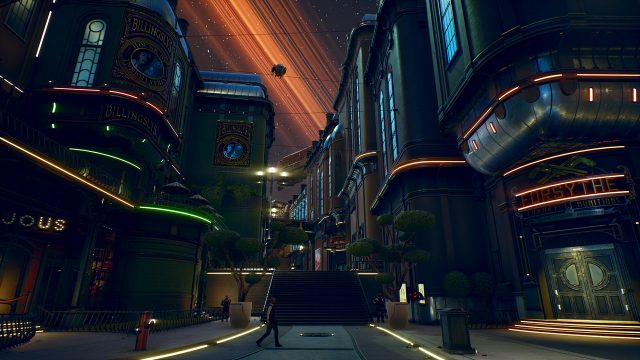 When creating a character, players can take advantage of certain character archetypes; in our case, we witnessed a Leadership Archetype in action, which grants bonuses gained through in-game actions to his two companions rather than affecting the player character directly. In return, the AI-controlled companions could hold their own in battle when prompted to do so, and add any skill modifiers, for example a bonus to speech, to the player character’s inherent stats.

At its core, The Outer Worlds will be instantly familiar to players who have spent any time with the choice-driven action RPG genre. Using an ability called Tactical Time Dilation, time can be slowed to a crawl during combat, depleting a gauge at the top of the screen. This can be used to get the drop on an enemy, line up head shots, or order either of the two companions to execute a special combat skill. Once combat is initiated, the companion AI takes over and they enter the fray freely. A neat additional effect of using Tactical Time Dilation is that aiming at specific enemy body parts displays what debuffs will be inflicted on them if hit in that location. Shooting an enemy in the leg, for example, slows them down considerably, though there are far more exotic foes to face on Monarch than just humans. 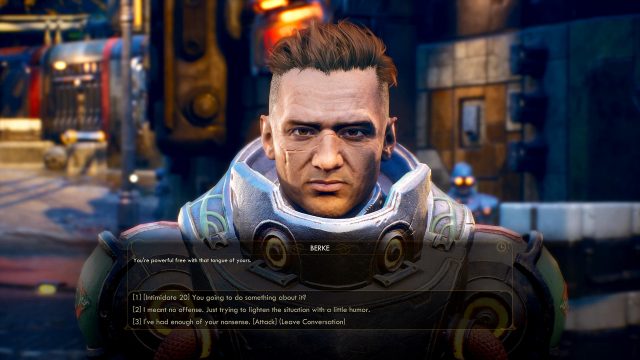 The Outer Worlds has a serious streak of dark humor running through it. A character with extremely low intelligence attributes, for instance, will have access to special “Dumb” dialog options not available to others smarter than your average bag of moon rocks. Tongue-in-cheek environmental storytelling and creature design are also in full effect; Obsidian has taken full advantage of the license of absurdity the over-the-top sci-fi setting offers. When given the choice whether to infiltrate the Boarst factory by force or via stealth, the room decided on the sneaky approach. Crawling through a concealed sewer tunnel, the party emerged in the factory’s Cystipig pens, a row of large porcine rear ends immediately facing the player as the screen fades in from black. Cystipigs themselves, once we got a better look at them, are mutated pigs raised especially for the delicious bacon-filled tumors that cover them, which fall off ready to be harvested when…ripe?

Stomachs sufficiently upheaved, we proceeded with the remainder of the mission, ending with a fateful meeting with the Boarst King, and possible mass-murdering sociopath, Clive Lumbergh himself. But to see how this storyline concludes, and what other surprises the game is keeping in store for us, we have to wait for its release on October 25, 2019.