Stranger in a Strange Land

If there is such a thing as a casual audience for first-person dungeon RPGs, Stranger of Sword City is most definitely not intended for that group. While the game is less demanding and onerous than early Wizardry titles, it is not something to be tackled lightly. Completing it requires putting up with deliberately time-consuming and obtuse rules, and its interesting means of obtaining equipment demands an even more sizable commitment of hours to forestall slaughter. I admire some of the concepts in Stranger of Sword City, but they are far more pleasant to observe from a distance than to engage with.

Navigating Stranger of Sword City‘s environments is similar to many other first-person dungeon crawlers, though the game does feature visible enemies on its tiles with only an infrequent random encounter out of the blue. Entering a fight finds six protagonists against any number of enemies, and the standard options at hand in a turn-based RPG will appear for conducting the proceedings. Accuracy is frequently low enough that both sides will miss more often than they hit, and this can make otherwise simple fights drag on longer than desired. Stranger of Sword City does have a useful option of fast-forwarding through combat, which can include repeating the previous round’s actions, but if something that demands the player’s attention occurs it will be necessary to look back through every action that took place. Without using the fast-forward feature the X button must be pressed to acknowledge every occurrence, dragging combat out to an unnecessary length. Initial traversals of the dungeons are rewarding at least, as they feature interesting mechanisms such as water currents and one-way doors that demand attention.

A significant aspect to Stranger of Sword City‘s combat is its Morale techniques. A gauge charges when regular attacks land, and at the beginning of every turn it can be used provided the necessary amount of Morale is present. Abilities accessible through this means range from free HP recovery every turn to guaranteed hits against the enemy with maximum effectiveness, and use of these methods is vital to surviving certain otherwise-disastrous boss attacks. A few of the Morale-activated moves are mandatory, but the player is able to choose between three options most of the time when procuring new ones, tailoring their usefulness to the individual. 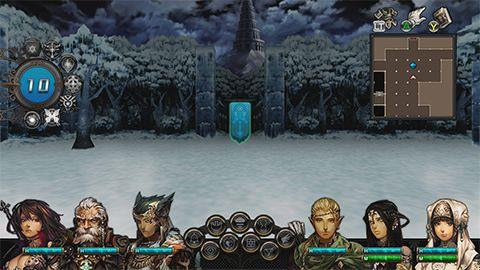 It seems to be dim. Not good, that means something needs to be killed again.

Acquiring new Morale abilities is done via hunting down unique adversaries called Lineage Types and presenting the spoils of the hunt to one of three NPCs. Lineage Types are bosses, and hunting for the ones that don’t automatically attack the player is mandatory to progress. Sometimes encountering these foes is actually rather interesting, such as a few that will only appear if battles in specific areas exceed a certain number of turns. Triumphing over these adversaries usually demands some thought, and many times running away is preferable to certain death.

Stranger of Sword City‘s inventory aspects are much harder to admire. A single equipment shop exists throughout the game, and its wares are never restocked. Instead the player must partake in ambushing enemies, which sacrifices some of the Morale gauge to lure out special opponents with equipment rewards upon their defeat. Ambushing is a finicky business, as certain foes must be eliminated within a few turns or else they escape and take their booty too. The type of equipment obtained is unknown prior to fighting, though the player can get a vague idea of the type of item at stake before engaging the opposition. It is entirely possible to waste a great deal of time obtaining useless armaments, and everything obtained through ambushes as well as general dungeon exploration remains unidentified until exiting the dungeon. At that point the game tediously reveals one-by-one each new acquisition’s nature, a process that cannot be sped up and thus gets boring when forty or fifty items have been gained. A limit of one hundred items may seem generous by the standards of dungeon crawlers Stranger of Sword City emulates, but enemy spoils and random drops scattered around the landscape will swiftly fill the bag to capacity. Even the game’s identification is often incomplete, most notably when items are acquired that serve as spell substitutes — never actually mentioning what those spells do if the player hasn’t yet learned them.

The party members exploring dungeons are blank slates defined strictly by the race and class assigned by the player. Changing class is possible, but comes with a cumbersome arrangement by which certain groupings of abilities learned earlier can be retained, and these classifications are assigned arbitrarily by the game. Helpful spells learned by a priest are not a single entity, instead comprising multiple bundles of spells that are treated separately for the purposes of retention by another class. A character subjected to a class change will have his or her entire equipment catalog emptied out, though the game is kinder than it could have been by merely stashing these into storage instead of subjecting them to summary deletion. Class changes also halve a character’s level while reducing statistics somewhat, meaning that newly altered characters will need some extra time grinding to cope with current challenges.

Dungeon exploration is the primary focus, but Stranger of Sword City‘s narrative manages some interest. It finds the mute protagonist sucked via a plane crash into an alternate dimension, where he or she meets with other Strangers who are attempting to find a way home to earth. Three factions exist among the Strangers, and each present made of Lineage remains to one of them strengthens the player’s standing with that organization. Prior to the conclusion a choice must be made as to which faction the player is aligned with, and it affects the story’s endgame. As a setting for the game world this narrative works, but its attempts to make the player care about significant NPCs falter. NIS America’s translation is solid barring a few typos that appear, yet the characters aren’t given enough to do that would make them memorable. 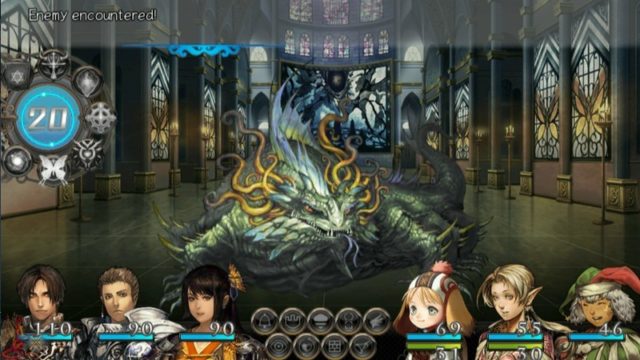 Such bad posture must make that beast easy to avoid, but without animated movements it’s hard to be sure.

Taken as individual images, the artwork that comprises Stranger of Sword City‘s world is impressive and detailed. The Vita screen gives it a pleasing depth, and the ability to switch between a cutesy aesthetic and a grittier one is interesting. Visuals barely move though, not even for spell animations, and the slight vibration of images on the screen doesn’t make up for their immobility. While they are likely to be heard many times, the compositions offered are aurally effective and suit the mood rather well. Some are clearly intended as background music instead of something to capture the player’s attention, but they do the job. The Japanese voice acting is serviceable but not memorable, and isn’t comprehensively heard throughout story scenes either.

Battling through this game will find the player marching over the same scenery repeatedly, stretching the game to past seventy hours for completion. Helpful shortcuts to the middle of dungeons exist, but every now and then a respawning Lineage Type will show up to force a repeat battle in order to use the shortcut again — though a handy automap reduces the time necessary for reactivation. Using the same spot for ambushes will not work, as the morale expended increases substantially until the dungeon is exited, forcing a great deal of traipsing back and forth when on the hunt for equipment. Except for the protagonist, all characters must be given time out of the line to recover after being felled in battle to replenish life points. Not doing so will cause these people to permanently die when LP are depleted: this is why the game allows more characters to be recruited and wait at home base while automatically gaining some experience, as quick replacements for the dead. Bosses come with nasty attacks that will often keep hitting a character until death results, and only a few irreplaceable items allow revival without heading back to base. Rewards from ambushes also come with traps, complete with unpleasant results such as being teleported randomly if the party is afflicted. Grinding is very time-consuming when the experience needed raises dramatically past level twenty, without a commensurate increase in the amount awarded by enemies. By the standards of 1980s dungeon crawlers this is nevertheless manageable, but this difficulty is nothing to take lightly.

I’ve enjoyed a number of dungeon crawlers over the years, but never have I felt compelled to go back and experience the earliest renditions of the type. Stranger of Sword City gave me some uncomfortable flashbacks to The Dark Spire while I played it, and one deliberately-archaic title in that mold was plenty to last me a very long time. Should I someday feel the need to partake of a first-person RPG that could have been made in 1984, I’ll probably just pick something actually from that year instead of experimenting with this one again. 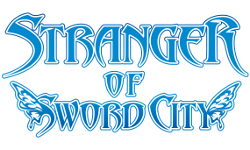