Down in Hermuda, the Pale Blue Sea

Phantom Brave: The Hermuda Triangle marks the second time that NISA has ported its gridless tactical RPG, originally seen on the PS2. Those that did play the first port over to the Wii, We Meet Again, will no doubt be wondering what more new additions have been made to attract them to this version. Unfortunately the answer to this is next to none, with the exception of a few extra optional battles and characters available after the main game is completed, this is the same game as We Meet Again. What we receive is a port that provides no real replay value, no reason to rebuy it if played previously, and an all around average game for everyone else.

Phantom Brave follows the adventures of 13-year-old Marona and Ash, her ghostly guardian. The story for the most part focuses on the eternally optimistic Marona’s attempts to be accepted by a world that hates her thanks to an ability to talk to and summon phantoms into the physical world. This bubbly optimism runs throughout the game and is both a strength and a weakness. On the one hand, some scenes manage to be very uplifting, but on the other, too high a number just come off as far too cutesy and uninteresting. The end result is a plot that is largely forgettable, with plot twists being either completely predictable or uninteresting. At least a choice is provided, albeit confusingly named, to skip cutscenes as they happen for those fed up with the overly cutesy plot.

The gridless battlefields of Phantom Brave are the main distinguisher from other similar tactical RPGs, with a maximum travel distance replacing the usual number of squares. It is easily possible and quite fun to extend the distance by “ice-skating” on certain surfaces. The edges of the battle field are also something to take into account as a lot of enemies don’t even need to be damaged to be defeated; throwing or knocking them off the side of the map will do just as well. The lack of a grid constraint is instead replaced by another limitation in the number of turns that a phantom summoned by Marona remains on the field. This, combined with a total limit on the number of summonings permitted, increases both the depth of the battle system but also the potential for frustration, especially when the only remaining character that can damage monsters suddenly disappears and leaves the battle unwinnable. In the end, the frustration becomes far more noticeable than any extra depth this may provide. Not only does consideration need to be taken into account when summoning phantoms, but also what they are summoned onto. Phantoms can only be summoned in place of battlefield items and the choice of item replaced will affect the phantom’s attributes. 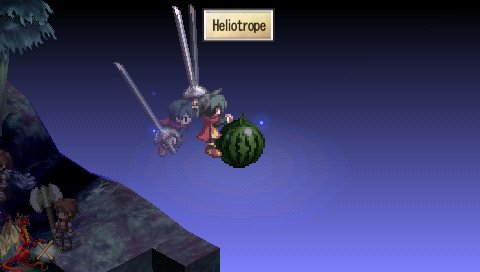 The tactical depth provided by the environments and summoning limits goes a long way to help define the battle system and set it apart, but the flaws bring it back down with a bang. Even if the perfect tactical decisions are made, the battle will not be won unless sufficient grinding has been done. Grinding is simply not optional in Phantom Brave and if characters are not sufficiently powerful there is no hope of winning the battle. There are tricks to drastically reduce the time needed to grind to advance story missions, but this only helps to point out some of the flaws in the balancing even further as it then becomes insanely easy to level too much and make the next set of story battles utterly one-sided in your favour instead. More so as the AI in these situations generally won’t even bother fighting, and instead, simply lie back and wait to die. If the AI tried to make a brave effort, it still would not cover itself in glory due to the frequent misjudgements in movements and wasting of turns it is highly prone to doing. In addition to the AI-destroying levelling, characters can be made stronger in other ways such as combining them together or equipping them with weapons. The huge selection of potential weapons and skills associated with them makes for great customization options even before considering that these weapons can also be combined to take on others’ skills and attributes.

The main story, depending on the amount of grinding, should take roughly forty hours to get through, after which there are optional extras for those who wish to keep playing. Like We Meet Again, the separate ‘Another Marona’ story is included, which can either be played starting from scratch at level one or in a New Game+ where levels and equipment from the main story are carried over. Another Marona is about a quarter of the length of the main story but battles are made considerably more difficult over a similar range of enemy levels. The result is that the difficulty of the battles here will range from very hard with even more need for grinding to those who start at level one to complete walkovers to those coming in with a New Game+. Another Marona takes place in a parallel universe, where everyone except Marona suddenly dies. On the plus side, this allows players to be able to have characters from the main story in their party, which is really the entire appeal of it. Another Marona’s story manages to be just as, and perhaps even more, forgettable than the main one, with the more light-hearted and jocular treatment of the characters turning out more disconcerting that anything else. As mentioned earlier, little extra is added to The Hermuda Triangle from We Meet Again with the only real addition being an island where characters from more recent NISA efforts, such as the Unlosing Ranger, can be fought and recruited after finishing the main story. 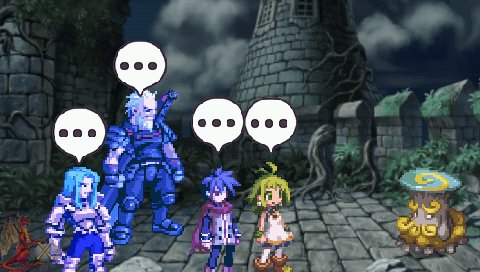 The correct reaction to a talking mushroom.

The graphics in Phantom Brave: The Hermuda Triangle remain distinctly mediocre. Both the detail on sprites and backgrounds has been surpassed by earlier releases of both PSP originals and remakes/ports of PS2 games. An option is included to switch from the ‘blurry’ models to ‘vivid’ ones but this is hardly an improvement as all it does is make all edges look horribly pixelated. Animations for both the attacks and cutscenes are okay, but again in that distinct level of mediocrity that really defines the game. Where Phantom Brave does break that mould however is the sound, as Tenpei Sato’s music is enjoyable to listen to and very catchy. The music helps keep some form of interest when the rest of the game fails to do so. Both Japanese and English voice acting is included and can easily be switched between. The English voice acting is of a high quality, as the cast’s experience in anime and other JRPGs shows through and manages to just about keep the story afloat.

While Phantom Brave: The Hermuda Triangle isn’t a poor game, it fails to distinguish itself from the multitude of tactical RPGs already around. Those die-hard fans of the tactical RPG genre will likely find some good hours of enjoyment from the battle system but will find little here to drag them away from the stalwarts. Players of the previous editions of Phantom Brave will likely find little reason to repurchase the game again while those just coming into contact with NISA or tactical JRPGs will likely find their time best spent with better PSP releases.