Rogue Factor’s sophomore appearance in the tactical RPG field after Mordheim: City of the Damned has many missteps but a decent foundation.  For this outing, the studio has made a game set in the Warhammer 40k universe in Necromunda: Underhive Wars.   Due to an erratic AI and far too many glaring technincal issues, Necromunda: Underhive Wars will appeal to a very narrow audience who cannot get enough of XCOM-style games.

Deep under the surface of Necromunda, criminal gangs known as Houses vie for survival, with fierce competition for the power, prestige, and loot needed to survive the Underhive.  Like the tabletop game, Necromunda: Underhive Wars features team-based gang warfare with each having a perk that makes them stand out, though only three Houses (Escher, Goliath, and Orlok) are available.  The main story follows each of the three Houses through various campaign maps designed largely to showcase how multiplayer works, told by cutscenes at the start and end of each campaign’s chapter.  Escher’s campaign follows the all-female gang comprised of rogues, with a focus on stealth and cunning; Goliath’s missions focus on brute strength and an “attack first, ask questions later” philosophy; Orlock splits the difference by not relying entirely on stealth or strength, but a measured approach.

What brings these groups into conflict this time around is DeVos, an unaffiliated scavenger who has found some information regarding a new type of power in the Underhive.  This power is called the Archeotech, which each of the rival gangs want for themselves.  The story generally follows DeVos’ recollections and does not do any favors to making any of the characters stand out as more than their base stats.  Each of them are just variations on thugs trying to get stronger, which makes it very difficult to get behind any of the gangs as they are just a collection of stereotypes that do not go anywhere.  Like the miniatures the game is based on, the story is like taking a bunch of the nameless figures and writing a fan fiction about them while throwing in extra threats and angry posturing. 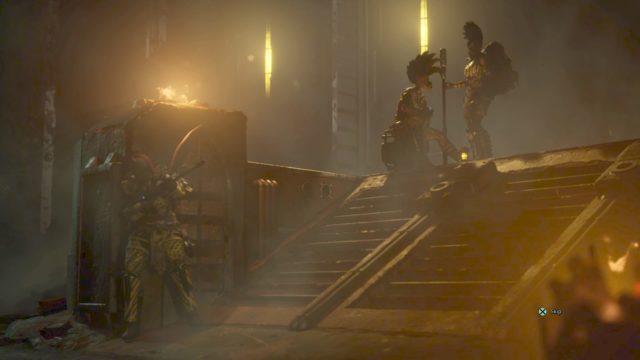 Each campaign map follows the same structure.  Each combatant within each faction on the current map goes during a round, with a maximum of five members per gang on the field at a time. The turn order is determined by each individual character’s speed stat.  During the campaign, individual character progression is not retained, and so characters boil down to either melee, short-range, or long-range archetypes.  Some customization with dropped loot is possible, but is never a better option then what the character starts with.  While the premise of some characters being better at combat and others at completing objectives makes sense on paper, it is not executed well within the game.

Objectives in Necromunda: Underhive Wars range from the usual kill all enemies fare to maps with more complex sub missions, though some of these sub missions are made more tedious by the game’s many bugs.  An example of this is a mission that has the team collecting cannisters for extraction, where a glitch made some characters unable to drop cannisters again or pass them on to others once they’d picked them up.  This meant that if the wrong person picked up the cannister, the map had to be restarted entirely.  Even with the occasional bug, other mission such as infiltrating a base, collecting their supplies, planting explosives, and leaving while their reinforcements are still pouring in were a lot of fun.

Gameplay itself, when it works, can be enjoyable, though inconsistent AI is a frequent damper to success.  Computer-controlled opponents often perform baffling actions, such as running around in circles and hiding in plain sight.  Furthermore, the game frequently presents the player with incorrect information: a 100% attack can miss, as the hit percentage fails to take into account cover and other factors.  Far too often, enemy teams or AI teammates will do little to nothing productive.  One map involved being outnumbered two-to-one after reinforcements for the rival gang arrived, but there was no pressure as none of the reinforcements would use their weapons or even get in the way to impede the progress made in completing the mission. 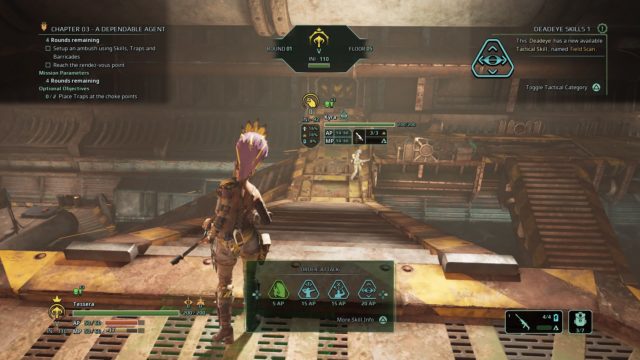 A sampling of the skills that this particular leader on this mission can use.

The game’s levels do vary quite a bit in layout.  This brings some needed fresh air to the proceedings.  Unfortunately, their layouts can be daunting at first and hard to orientate in, because the only maps the player has access to are in the form of 3D blueprints.  Graphically, however, the levels themselves all look the same as, sadly, a dystopian Underhive just looks like a set of giant sewer systems. Visual variety is not there but at least it will never be the same layout in the campaign two maps in a row.  The game’s visuals look sharp and do not have any clipping or other graphical glitches.  At least in the campaign, players have no time limit and can run around as much as needed to get their bearings or take in the scenery.

One consistent, glaring problem with Necromunda: Underhive Wars is overall stability.  On one mission, the game crashed over a dozen times.  Thankfully, the game does provide an autosave that starts off at the same turn, though this is not much of a saving grace, as a lot of time is wasted getting the game loaded back to where the crash occurred.  Get used to seeing the opening cutscenes for the story mode and for the campaign map because part of it must be listened to before skipping back to where the crash occurred.  The glitches are not only in the campaign maps either, as most of the cutscenes have issues with the audio and video not syncing properly.  In some instances, no voice acting comes through at all with just music blaring as subtitles are shown.

Music is somewhat sparse in this game during matches or inoffensive enough to not really be noticeable.  But inoffensive is the best compliment the music can receive as it is so bland that it has largely been forgotten moments after it has been heard.  Sound effects match up properly with the game’s weaponry.  Voice acting works for what little there is, with everyone fitting their roles well, but unless an in-campaign map objective has been completed, no dialogue between the characters occurs, except during cutscenes. 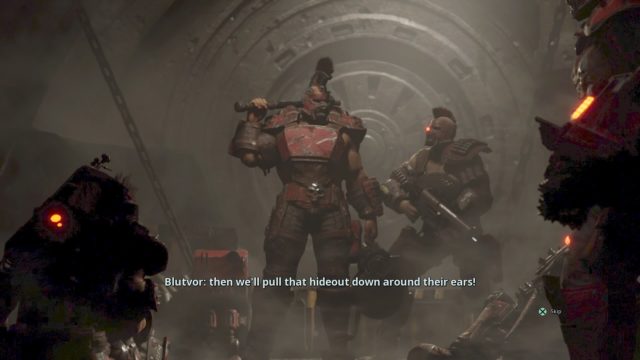 Cutscenes are voiced adequately, but do not always sync properly.

The multiplayer experience that the game keeps building towards can be accessed anytime and has plenty of customization, with loot drops and skill trees to make a flexible roster.  Load times to connect to a room are not terrible, and it took at most five minutes to get a match going.  However, the multiplayer is plagued with the same glitches and stability issues as the single-player campaign, so be prepared to lose participation rewards even by having matches drop due to the game crashing for one player.  Multiplayer does showcase every variable of objectives one can have with a few map features not seen elsewhere in the game, with loot that is kept after the mission ends.

Necromunda: Underhive Wars is its own worst enemy; no game should be in a constant war with itself to be playable.  Instead it should show off its map and objective variety with a completely capable combat system.  While it is possible the game can be redeemed with multiple patches and quality-of-life improvements, for now it is a rushed and half finished experience with only faint hope that anything can be salvaged. 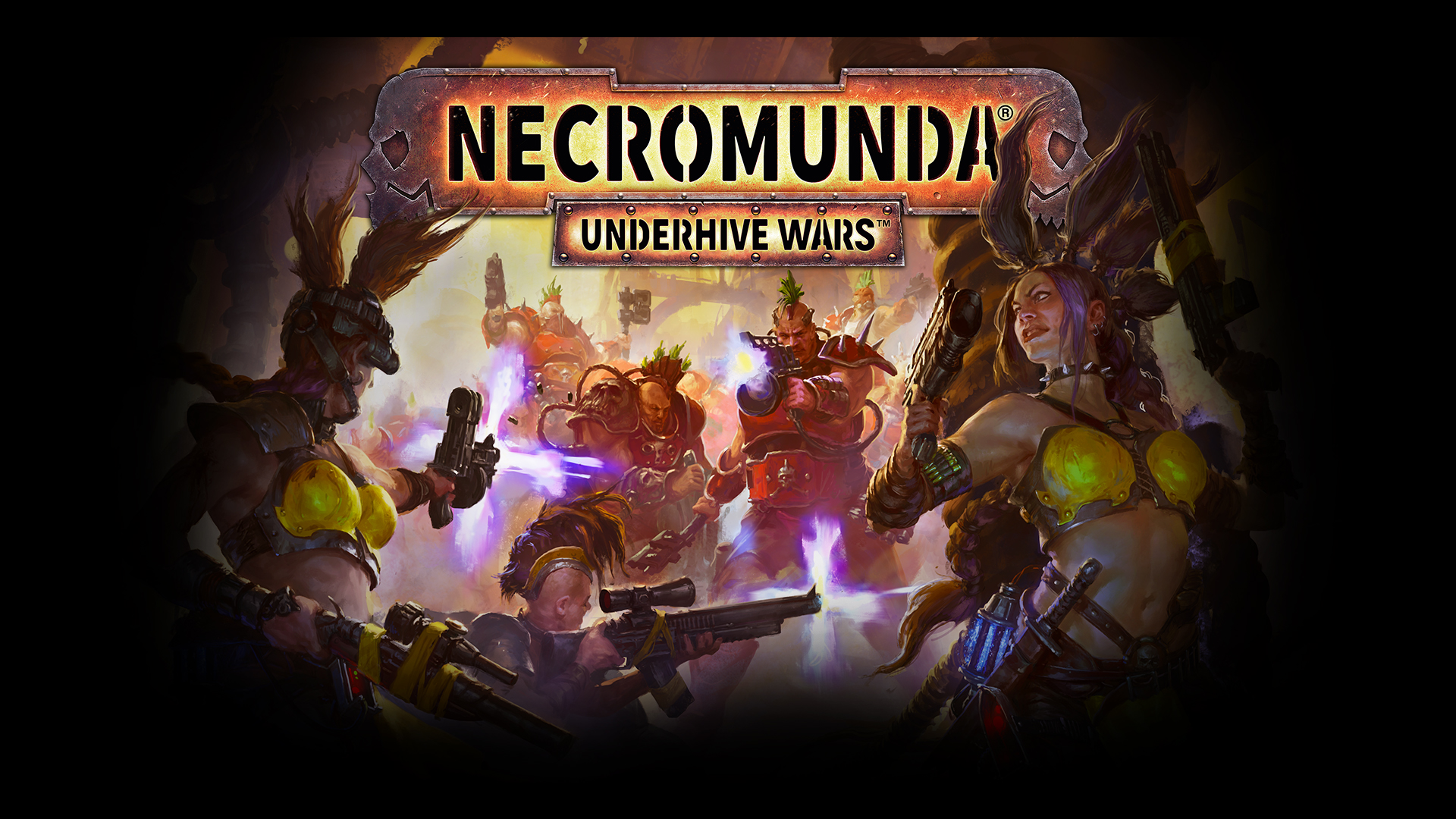