Strategy RPGs have generated a storied history over the console generations. Final Fantasy Tactics provided many gamers’ first exposure to the subgenre during the first PlayStation era, with Ogre Battle or Vandal Hearts there to reward RPGamers wishing to venture further. While over the last decade Fire Emblem has ascended to the throne of the subgenre, developer Rideon has established a following for its Mercenaries series, and brings a fifth title to the Nintendo Switch with Mercenaries Blaze: Dawn of the Twin Dragons. It is a standalone tale with no direct relation to the previous games, and while it is not afraid to wear its’ homage to other series on its sleeve, Dawn of the Twin Dragons does little to elevate the game mechanics it seeks to replicate.

The story takes place in the kingdom of Euros, which is currently roiled by an immigration crisis from the nearby Westarii region. A recent peace deal brokered between the government of Euros and the national church allowed for immigrants to stay contingent upon a religious conversion. While this temporarily brought peace, an influx of immigrants and an enfeebled economy have exacerbated tensions. The narrative centers on Lester, the scion of a fallen noble family, who works as a mercenary as he aims to restore honor to his family name. 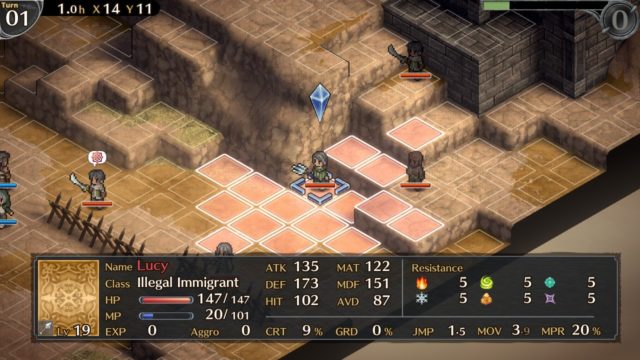 The first enemy you fight in the game is an “illegal immigrant.”

Seconds after the opening story scene, Lester and his cohort apprehend a group of “illegal immigrants” at the direction of the Prime Minister. It’s striking to see the words “illegal immigrant” tossed around gratuitously in this game. The topic of immigration is a loaded one the world over, and while video games are absolutely a valid medium for exploration of nuanced and emotionally challenging themes, the first minutes of the game involve the player subduing a crowd of rowdy enemies whose class is literally defined as “illegal immigrant.” The dismissive treatment of the subject matter is alarming and more thought should have gone into the localization process, especially when antagonists begin referring to immigrants as filth and actively discussing plans to commit genocide, subject immigrants to inhumane experiments.

While Lester and the other party characters may have progressive viewpoints regarding human rights, at no point does the narrative reach any sort of culmination or apex of realization. Lester has no problem casually sending a former neighbor to a work camp where he will presumably work his way to citizenship. He is rightfully horrified when the friend is turned into a monster, but the emotional intensity of the scene lasts for about two text boxes. It’s disheartening to see the subject matter treated so lazily, and the story that is there unravels towards the end with the reveal of the final boss.

The series borrows liberally from the greatest hits of the genre and while hardly original, it is well-executed. Interaction in this game is somewhat limited: the player enters into a battle, observes a story sequence, and then returns to the party management screen. There are no towns to explore or random battles to stumble into, and all party management, shopping, and grinding of random battles is done through the main menu. Players control a maximum of eight characters who only possess a handful of class options. This straightforward approach is not necessarily a flaw, however, and it is clear the developers considered the idiom “lean and mean” as a design aesthetic. 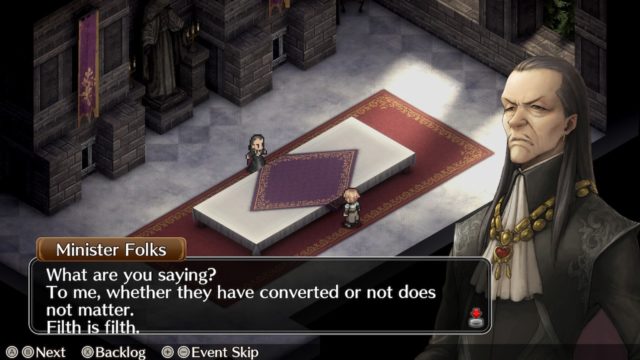 The presentation issues are relatively minor.

Character build customization is not sacrificed in the name of brevity. Characters earn skill points which are used to change classes or unlock and upgrade abilities. Characters retain any skills learned when they change classes, eventually allowing for some extensive attack options during battle. Players are given the choice to invest in each character’s individual abilities and passive skills at their discretion, allowing for an efficient and effective method of customization on a deeper level.

The game’s aesthetic is designed to appeal to anyone who remembers looking at the import catalog advertisements in the back of Electronic Gaming Monthly in the late 1990s. The graphic and art direction features 3D rendered backgrounds, fully reminiscent of Final Fantasy Tactics with 16-bit inspired pixel models for the characters and enemies. While the battle sprites are yet another well-done bit of nostalgia, they can be a bit fuzzy especially when playing in docked mode. On the other hand, the music is decidedly mixed. The best battle themes and sound effects are heavily inspired by Final Fantasy Tactics, while less successful tracks are easily forgotten. There is a sore spot in the general presentation as the font is unattractive, with text that frequently lands outside the margins of the text box. 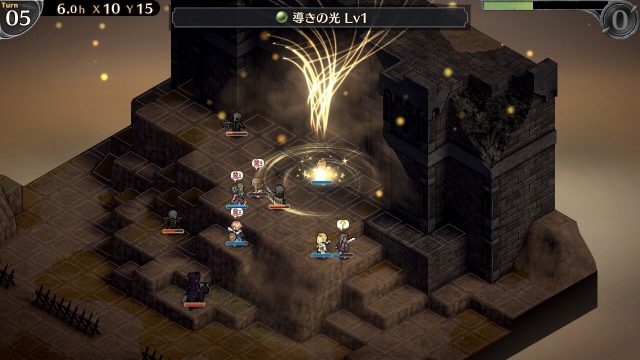 The battle system evokes memories of classic SRPGs from the PSX era.

The battle system is a highlight. While it initially appears to be a standard turn-based strategy RPG, there is hidden depth buried within the game’s systems. Specifically, late-game characters possess an incredible roster of varied useful attacks. The enemy AI is remarkably intelligent, a surprise to any player expecting to auto-battle their way through every random encounter. The game provides ample opportunity to engage in optional battles and provides generous rewards for doing so, including puzzle pieces that can be exchanged for rare weapons and items. The game is generous with experience and money. While healing during the initial battles is difficult, there is a wide range of items available for purchase including ranged restoratives. These AoE curatives are useful considering the game does not restore health or magic between battles. The trade-off is that a unit’s health restores when they level up in battle, which should prevent too many Game Over screens. Ultimately, the various mechanics and underlying systems come together to form a cohesive SRPG which is surprisingly effective and thoroughly playable. For those who beat the game once, additional battles and difficulty modes become available.

While the story fails to deliver any sort of insight or even serve the complex subject matter it lazily employs in the opening hours, Mercenaries Blaze: Dawn of the Twin Dragons is a surprisingly layered title which lovingly borrows from the best of the genre, which is best reflected in the game’s battle mechanics. The game provides a solid if unoriginal strategy RPG experience on the Nintendo Switch for series veterans and newcomers alike.