Exist Archive: The Other Side of the Sky Vita Review

Seeing Exist Archive: The Other Side of the Sky in action definitely makes clear its similarities to tri-Ace’s Valkyrie Profile, though unfortunately the same height of quality is not reached. Maybe part of that is co-developer and Japanese publisher Spike Chunsoft’s mindset not gelling very well with tri-Ace, or maybe the inspiration just wasn’t present. I can most assuredly state that the Vita version of Exist Archive didn’t receive the QA it needed, as some technical issues that are impossible to overlook exist. Even with its myriad problems, Exist Archive is still an interesting experience.

An explosion in downtown Tokyo engulfs Kanata, but death is not precisely what awaits, as his narration of the event reveals. Kanata finds himself in a place called Protolexa, a world where souls of the deceased are scooped up and sent back to inhabit new bodies. Kanata isn’t about to be returned in any form, as he is now host to a piece of Yamatoga’s soul, a powerful being native to Protolexa but recently robbed of his body as punishment. Yamatoga has bequeathed some of his power to Kanata and the other eleven individuals hosting parts of his scattered soul. These characters will not be returned to the soul cycle on Earth so long as they host part of Yamatoga, as he will not be permitted to leave Protolexa in any capacity by Amatsume, the administrator of soul processing. Yamatoga’s split into twelve parts in the first place was done after he rebelled against her authority, and she has no intention of letting him loose again.

Exist Archive plays with a good number of interesting concepts, especially since the mutually irreconcilable goals of Kanata and Amatsume would seem bound to produce some worthwhile discussion. Yamatoga himself is an entertaining character, frequently chiming into conversations with a sardonic worldview unlike that of the protagonists. This narrative potential unfortunately isn’t realized for the most part. Protolexa is supposed to possess a sizable hierarchy of inhabitants termed Chausseur, but very little of this is explored and almost every one of these beings simply exists as a nemesis to be slain. Yamatoga’s soul imparts immortality to the individuals possessing a piece, but this is also not a concept that is elaborated upon sufficiently. 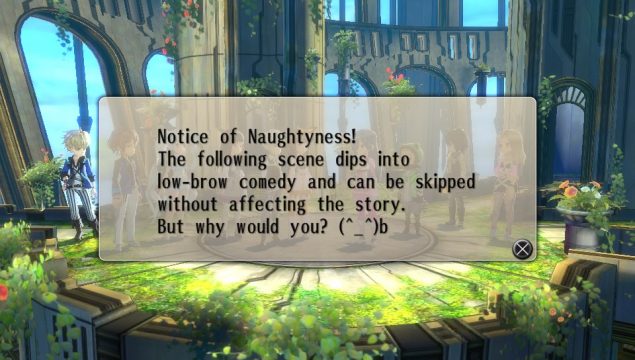 This is a new one to me.

The characters who join Kanata are indeed a varied bunch who include a number of his friends from Earth, someone who plays a Super Sentai derivative on television, and multiple delinquents who’ve run afoul of the law. Much of what they have to say is initially interesting, but the narrative has a bad habit of introducing character traits and then not doing much with them. Snippets of further growth are presented at disparate times, and are also frequently too brief to be effective. The central dilemma of being made immortal at the cost of remaining on Protolexa doesn’t receive the necessary development to make it feel as if the characters are actually giving the matter sufficient consideration. Related to this situation is the enormous proficiency in combat aptitude Yamatoga infuses within the protagonists, and it is similarly given too little consideration. Aksys Games did provide a solid localization though, even if a few typos slipped through.

Moving through dungeons is immediately reminiscent of Valkyrie Profile, featuring a player character moving through two-dimensional landscapes with a style akin to numerous platformers. Touching an enemy initiates a turn-based combat system with significant action elements to demand some attention from the player. Each character uses a different weapon and has access to distinct move sets, which can hit multiple foes concurrently and scatter whatever formation the opposition occupies. Ceasing the attack causes opponents to get up and resume their positions, which can be useful if it allows more to be struck in a tight group. The player can manually block attacks, though doing so uses some of the action points that would otherwise be available to fuel other options. Stringing repeated blows to the adversary party also charges Greed Mode, in which Yamatoga can unleash strong blows that circumvent action point restrictions. Taking enemy blows decreases the Greed meter, providing a good incentive not to husband this resource, especially when what has been generated starts from zero again in every encounter. 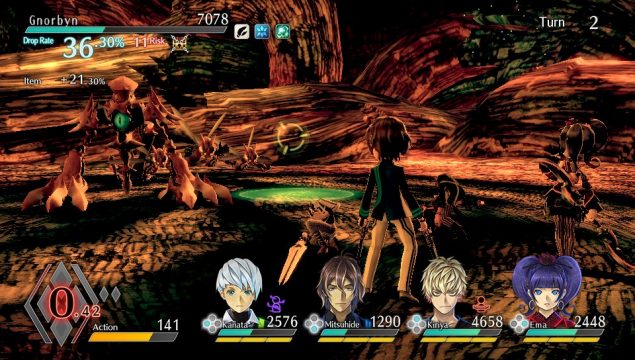 None of these enemies are supposed to be ghosts. Is this game – HAUNTED?

Combat is a mix of intriguing ideas with questionable execution. The kinetic nature of sending strikes that toss enemies around is fun, and there’s a tactical element when aiming attacks at the most effective part of a formation. Problems start to crop up with the rampant reuse of enemy designs, which is notable even in a genre known for palette swaps. Later renditions of opponents have higher stats but don’t act any differently than when the designs were first seen, and what are initially imposing bosses become much less so once their visuals are recycled ad nauseum. Also bothersome is a lack of targeting information to aid the player in showing the affected area of each attack, an important factor when large formations of foes are frequent.

A gaping distance separates the characters using melee attacks from magicians in combat. Melee characters can continue to attack until the action meter is exhausted, while mages can use one spell maximum per action phase. If a stronger spell is used, the magician will be unable to do anything for one or more turns until the cooldown for employing such powerful spells is finished. While this handicap makes mages less useful in a brawl, they also have access to healing spells. Without magic the party must rely upon items for healing.

Items are problematic because they can only be found via battle spoils and while exploring the environments, at least until the ability to purchase supplies is finally gained. Even when healing items can be purchased, their effectiveness is limited compared to what will be awarded through exploration. The game is often generous with spoils after combat, but depending upon the RNG to deliver what is needed may work out poorly. 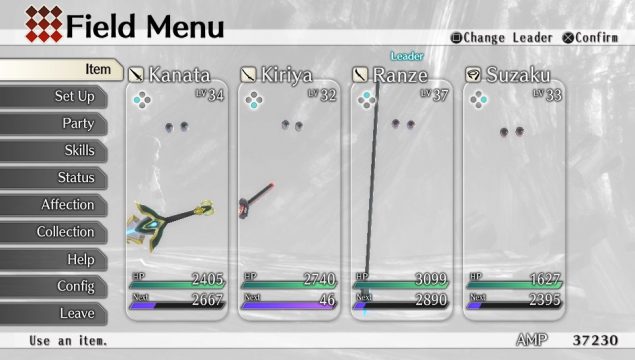 Used properly, this could fuel a horror premise of some sort.

Battle spoils also make up the vast majority of new equipment for all characters. While the ability to buy gear through a shop is eventually unlocked, the wares on offer are inadequate compared to what is available from combat. The player is likely to be deluged with materials, many of which have only minute differences that the ‘Best Equip’ option may not adequately reflect.

tri-Ace’s propensity for complex systems rears its head once more in the multitude of skills to be learned by characters. Some seem character-specific until the ability to have them be learned by others in the party appears, potentially presenting an enormous array of combat options. Getting to that point will require a lot of time to be spent in ancillary missions however, and these show off an unfortunate lack of variety in the environments.

Initially exploration is interesting, especially as areas are unreachable until new moves have been accessed. The interest fades once it becomes clear that a few map designs are recycled throughout the game, and blatant reuse of the same areas is seen even by a player rushing through. Fully investigating most places is only doable by returning after the initial mission, a task that becomes wearisome – and this is before the need to thoroughly explore even already-visited parts to uncover memories that fill in additional character background. A couple of new environment types are finally seen near the conclusion, by which point it’s too late to make up for the profusion of forest, desert, cave and floating island zones. 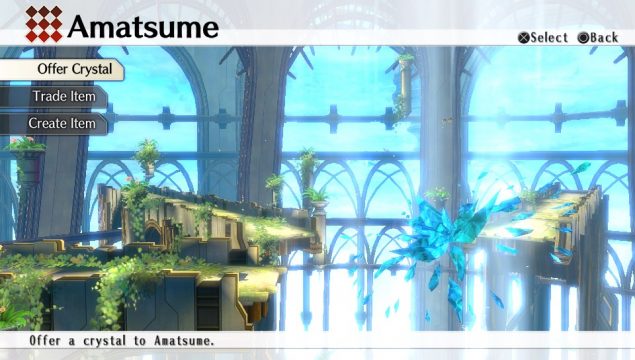 Teenagers around the world wish to have this disappearing ability.

The PlayStation Vita version of Exist Archive was sadly not given the same quality assurance as the PlayStation 4, and it features some technical problems as a result. Graphical glitches that make party members invisible save for eyeballs suspended in the air, or render larger adversaries invisible despite staying selectable targets in combat, are befuddling without directly affecting play. Instances where the game takes longer to load an area or process the end of an action phase are annoying, but not ruinous. The killer comes when Exist Archive suddenly crashes, as saving within dungeons is impossible. Crashes may not be frequent, but their existence is disgraceful.

Aside from the wholesale reuse of assets, Exist Archive acquits itself adequately for visuals. The tiny amount of animated clips stands out when almost everything is conveyed via the in-game graphical engine, but at least the polygonal models manage to do the job. Aksys Games’ localization does a solid job for the plentiful voiced dialogue, though the original Japanese cast is also present for variety. Motoi Sakuraba’s score is workmanlike, with many tracks that don’t stand out and a few catchy ones that do. 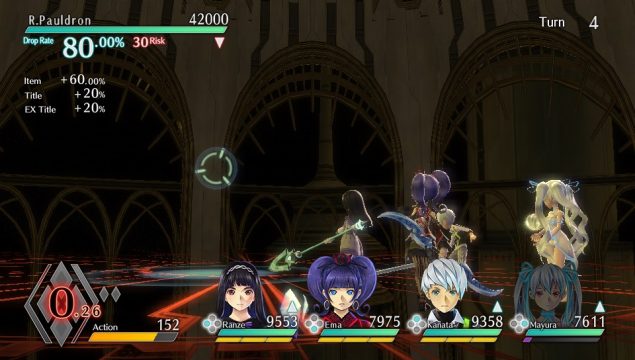 What could this possibly be? Does anyone know?

Something about Exist Archive enticed me to keep playing in hopes of learning more about its world, even though that hope receded as time passed. The game also produced a unique occurrence, for never before have I come up against a final boss rendered invisible by a glitch. Despite the existence of multiple endings, I have no plans to revisit this title in the future, not after the myriad frustrations experienced. tri-Ace has done better and hopefully will again.