I think it’s safe to say that the Compile Heart fanbase has certain expectations whenever the developer releases a new game, a better-than-vague idea of what they’re in for. To its credit, the Neptunia creator is nothing if not consistent in what it delivers to players time after time. For all that, Death end re;Quest, the latest title to receive a localized western release, may yet have a few surprises up its sleeve, and draw in a new slice of gamers based on the strength of its interesting narrative premise and execution. Even though it does contain some loose threads that begin to unravel before the end, Death end re;Quest is overall a solid effort.

The story of Death end re;Quest is set up quickly. About a year before the game’s opening, Shina Ninomiya, a coworker and friend of video game coder Arata Mizunashi, mysteriously disappeared without any trace. The two had been developing a VR MMO named World’s Odyssey together, although the project was stopped after Shina’s disappearance. Now, as the events of the game kick off, Arata receives a mysterious email from Shina’s dormant World’s Odyssey account; checking the game’s servers reveals that Shina’s player avatar, inhabited by her consciousness, has been actively stuck inside the game for the past year, with her physical body jacked in at an unknown location, for some reason unable to log out of the game.

Without any way to reach Shina’s physical self, Arata decides the only way to help her escape World’s Odyssey is by helping her complete the game, triggering an endgame sequence that should enable Shina to leave the game world. The trouble is, the MMO has become hopelessly overrun with malignant bugs, materializing in the game as ferocious beasts and giant, grotesque boss monsters, respectively called Martyrs and Entoma Queens. Shina and Arata, who’s taken on the in-game guise of the cute and cuddly teddy bear Enigma, attempt to reach the game’s end together, traveling with a harem of female NPCs they meet along the way. 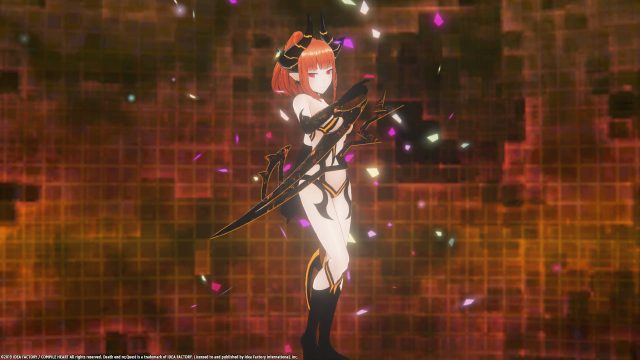 Gameplay in Death end re;Quest is divided into two camps. In addition to helping Shina and her party online as Enigma, Arata becomes embroiled in a complex real-world investigation as well. Along with some of his coworkers — others who are familiar with the World’s Odyssey project and Shina’s disappearance — Arata attempts to unearth what has happened to the MMO’s code and to pin down the location of Shina’s body. But the rabbit hole goes deep, and the investigation soon involves conspiracies, grisly murders, occult rituals, and a shadowy group hidden behind rabbit masks hunting him and his friends down. Arata’s investigation is told in the form of an entertaining and well written visual novel, as he and his companions try to remain one step ahead of their pursuers, all the while following up on leads as to the mystery behind World’s Odyssey and Shina’s disappearance. The moment-to-moment writing is engaging and varied, with thrilling escapes, close shaves with danger, and even some downright spooky and unsettling scenes as the occult connections begin to be unearthed, with fluid dialog and relatable character interactions.

The visual novel continues with the online cast as well. As Shina and her friends explore the dungeons, they come across Reality Objects, items from the real world that often carry some personal significance to Shina and Arata, and that have been deliberately placed in the virtual realm by an anonymous interloper for them to discover. Coming across these Reality Objects, as well as other obstacles encountered in World’s Odyssey, requires the player to switch back to the real world in order to let Arata investigate further. The mysteries compound when Arata begins finding enigmatic lines of code left for him in the unlikeliest of places that just so happen to let him alter the game’s internal code so the party can advance. It becomes clear that an unseen force is guiding the investigation, and is prepared to step over bodies to achieve its goal.

The game’s tone, despite moments of levity and the occasional bit of fanservice, is fairly dark and grim. At numerous points throughout the game, the girls must suffer through scenes of extreme violence, much of it described rather than shown, but the voice acting present during many of these moments leaves little to the imagination. A lengthy scene set in an active volcano stands out as particularly graphic; listening to the girls scream, pant, and wail as the heat rises and they are literally burning to death is very heavy, and most boss battles feature similarly explicit scenes after a loss. The game revels a bit in these death ends, and the fact that they count toward completing a codex of in-game scenes as some sort of twisted collectible comes across as a bit fetishistic. But there are themes of friendship, perseverance, and loyalty spread throughout the narrative as well, which is designed in such a way that, piece by piece, small bits of it keep falling into place until its conclusion, and even beyond. 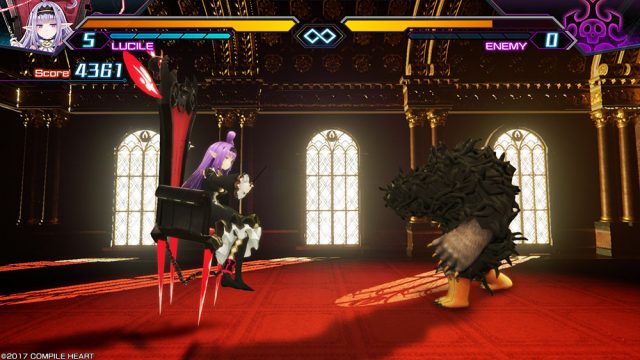 The idea of turning your battlefield into a 2D fighter is one of several clever ideas conceived for the combat system.

Whereas the game’s visual novel sections make up about 70% of its gameplay, the remaining 30% is comprised of overworld traversal, dungeon exploration, and combat. Unfortunately, though there are a few solid ideas, these aspects are nowhere near as engaging as the narrative. The world design is quite dull, with dungeons during the first half in particular having very few visual frills or design quirks to remark upon. The latter half at least introduces some more interesting areas, but by then the monsters peppered throughout are such bullet sponges that combat ceases to provide any entertainment, and running past when their backs are turned becomes a much-preferred option.

Combat itself incorporates some interesting elements. Lending at least some strategy to the proceedings is the fact that enemies can be sent flying backwards after a successful combo is performed; pinging them off each other or the combat arena’s border does damage, while sending them flying into another party member affords a bonus attack. Arenas are littered with bugs, damage-dealing spaces that can be cleared by sending enemies flying through them. Reducing the amount of bugs in an arena to 50% or less enables Arata to lend a helping hand with various Battle Jack abilities, including summoning previously-defeated boss monsters to help or installing a whole new game genre for the combat, like briefly turning the battle into a 2D fighting game, a slot machine, or a shooter.

As interesting as these ideas are, combat fails to strike a balance that could be considered “fun”. Later encounters become an unbalanced mess, made worse by character and enemy elemental alignments that can spell the difference between one character barely making a dent in an enemy health bar while another instantly annihilates the foe in a single combo. Certain mechanics are never explained to the player; for example, it is possible to go the entire game without realizing that one can swap out characters in the active battle party during combat, which requires that characters are paired up as partners in a menu beforehand. With better balancing and a streamlining of certain elements, the combat system could easily have been on par with the enjoyment gained from the novel-length narrative. As it stands, it is an unwelcome chore that gets in the way of triggering story events on the map, grinding away at the potential fun to be had. 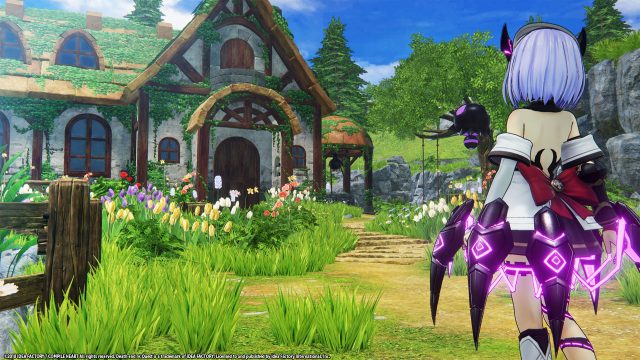 Death end re;Quest observes the same dichotomy in its graphics seen in the gameplay. The plentiful visual novel sections are accompanied by large and vibrant character portraits of all the game’s major players, complete with revealing outfits and ridiculous proportions. Each character, including the more appropriately-clothed real world cast, has several expressions and stances to cycle between. The still-frame backgrounds are also of high quality, with not an unsightly scene to be found. This stands in contrast to the uninspired enemy designs and bland dungeon areas of the early game, which give way to slightly more engaging, though still woefully unadorned, dungeon themes during the later game. The handful of scenes that play out in the in-game graphics engine similarly fail to impress, with characters that look decidedly stiff. A positive exception to the simple enemy designs are the bosses, which offer proof of some effort on the part of the designers to make them as memorable as they are misshapen.

The game’s audio presentation can be considered one of the biggest feathers in its cap. Not only are the musical compositions easy on the ears and inherently memorable — a good thing, too, since they are played over and over again for going on forty hours — but the voice cast is downright excellent. Both the original Japanese audio as well as its English dub are available, and can be switched between on the fly at any point, though it must be noted that only about half of the English script features voice acting, while the native Japanese story is fully voiced. Death end re;Quest‘s localization team has done an outstanding job carrying over character-specific nuances while preserving a story as involved as this one is, technical jargon and all.

While it is far from perfect, Death end re;Quest has some refreshingly honest qualities about itself. On a story level, it promises a twisted trip of mystery and conspiracy, and delivers on this and more in spades. The narrative is presented well in terms of both audio and visuals, topped off by a high-quality localization. However, its gameplay stumbles with good ideas that weren’t given enough time and balance to gel into something special. It may even be a tad too lengthy, as quantity slightly edges out quality towards the very end. At times spooky, at times brutal or corny, on the whole this rabbit hole is one that casual and hardcore fans alike should feel comfortable diving into. 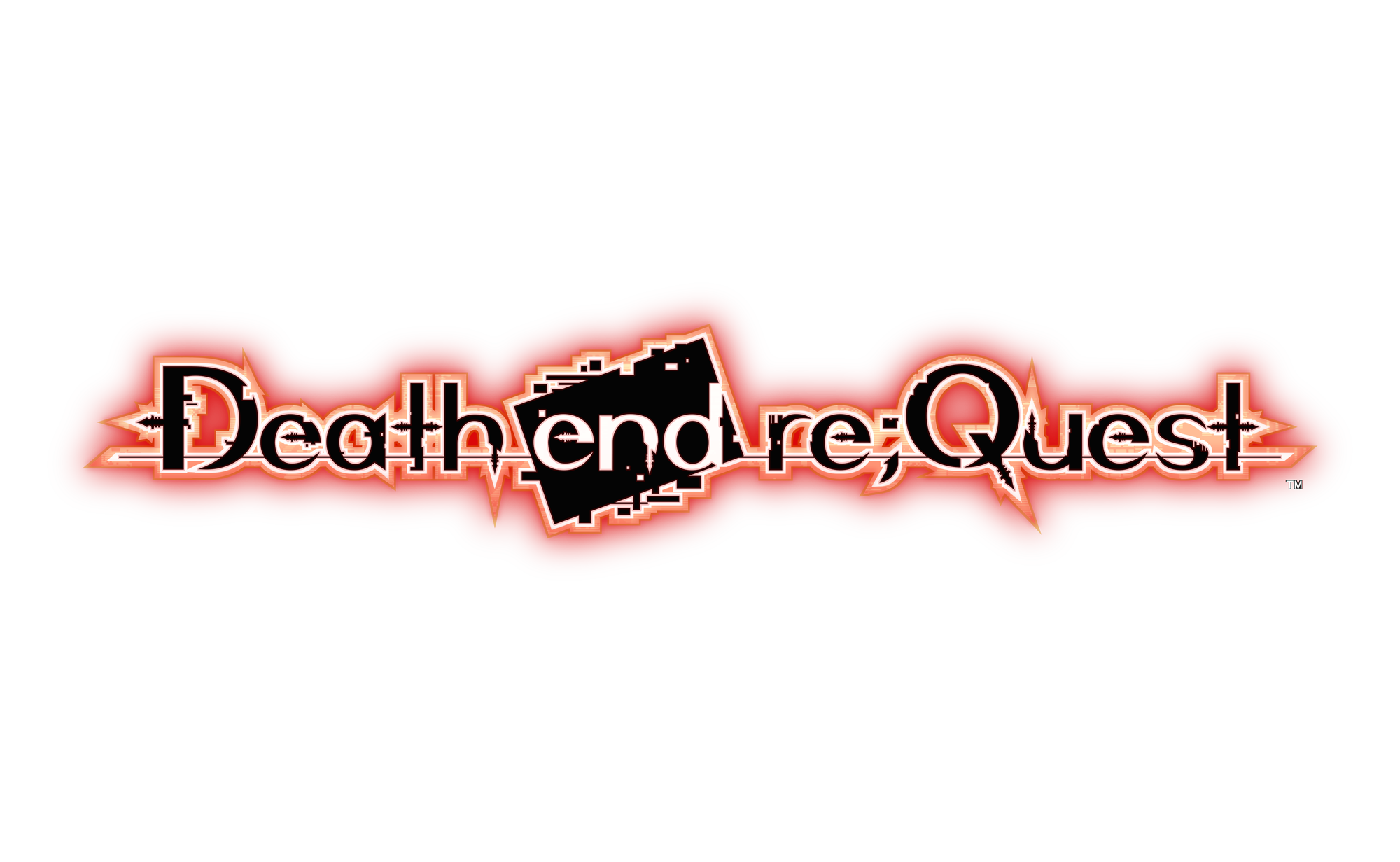