ClaDun Returns: This Is Sengoku! Review

So Many Dungeons, So Little Story

After a six-year hiatus, the ClaDun series, short for classic dungeon, returns with the new aptly named entry ClaDun Returns: This Is Sengoku! The retro-style series initially released on the PlayStation Portable appears for the first time on PlayStation 4 with this entry. With its return it brings back many of the systems and mechanics fans expect, offering a pure dungeon crawling experience. What it lacks in story it makes up for with a dizzying array of progression mechanics, featuring both static and randomly generated dungeons, and a number of customization systems to keep players’ interest.

ClaDun‘s story — if it can be called that — takes place on an island of trapped souls that can’t reincarnate. The player, who is also one of those souls, is tasked with finding out why souls have lost this ability to reincarnate. There isn’t really anything more to the story than that, but it’s nice that the game doesn’t pretend otherwise. Players progress through ten chapters, each made up of five dungeons. At the start of each new chapter another soul that cannot reincarnate shows up, and a generally short bit of dialogue gives the most vague of motivations to go through the next set of dungeons. These characters are also left mostly undeveloped, though they do have short backgrounds and some unique dialogue styles.

Gameplay in ClaDun includes both preparation and execution, with much more weight placed on preparation. Players create a main character and can recruit or create additional characters to fill out the party. The game features a Magic Circle system for setting up the party. A Magic Circle is a grid configuration of statistic bonuses. One of the party characters takes the Lord position and occupies the center of the grid, and is the only character who directly takes part in combat. A number of other party characters take on support or Vassal roles and can be placed in one of several predetermined places around the grid surrounding the Lord, which link to nodes with stat bonuses. When the Lord is attacked in combat, it’s actually the Vassal on that side of the Lord on the Magic Circle who takes the damage, so for example if the Lord is attacked from the left, the Vassal to his left on the Magic Circle is damaged. Certain items players collect in dungeons are placed on these nodes to unlock their bonuses. There are also nodes with negative statistics that may become unlocked, creating an interesting balance. When a Vassal dies, any of the bonuses linked to that Vassal on the Magic Circle are lost and the Lord will take damage if attacked again from that direction. As players level, they earn many class-specific Magic Circles with different layouts, and collect more items to unlock more nodes. Each character also has a class, which has different benefits when that class is in the Lord or Vassal positions, and characters can be freely swapped between Lord and Vassal positions while outside of dungeons. It’s difficult to explain the system in a short paragraph, and even when playing the game it will feel unintuitive in the beginning. But when players get the hang of the system they’ll have endless customization and optimization options at their fingertips, using countless arrays of combinations and setups that can be tailored to different classes, play styles, and dungeon encounters. 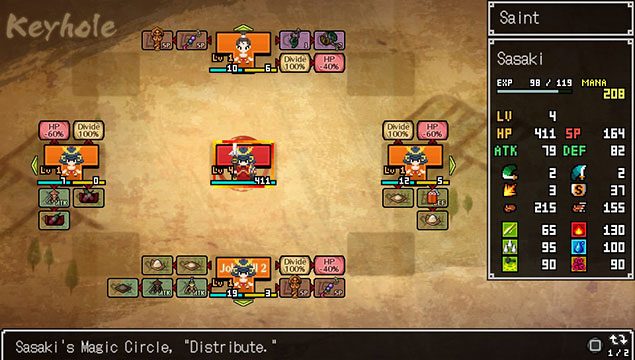 The Magic Circle system offers many options and combinations to explore and optimize.

The execution part of combat is relatively simple. It features several different weapons, from bows to magic staves to swords, each with a unique playstyle, and each better suited to some classes than others. As characters level up, they also unlock abilities for the weapons suited to their class. Combat is mostly straightforward yet responsive hack-and-slash, with a few abilities thrown in once in a while when circumstance demands. Story dungeons are pre-generated and quickly ramp up in difficulty. Later dungeons are littered with a variety of traps that become visible only when players get within a few steps of activating them, demanding an increasingly cautious style of play. Enemies gain immunities, area and continuous damage, and other such abilities. The answer to increased challenge is almost never improved execution. Instead, players can typically gain an upper hand by rearranging their Magic Circle or completing quests that unlock new, more powerful weapons. Boss battles are also very plain, often made up of groups of common enemies. Nevertheless, the combination of interesting dungeon layouts, enemy encounter combinations, use of environment, and deep preparation keep dungeon crawling gameplay in ClaDun engaging throughout.

In addition to the story campaign, ClaDun features an endless supply of side content, progression, and customization. There are roguelike random hundred-floor dungeons that must be restarted if players die, a second set of optional dungeons that progressively unlock as story dungeons are completed, the ability to place wall stones at a fortress to change character statistics, and even the ability to fully draw your character sprites or compose the game’s music from scratch. Despite its deceptively simple appearance, the game is just teeming with all sorts of content and things to do. 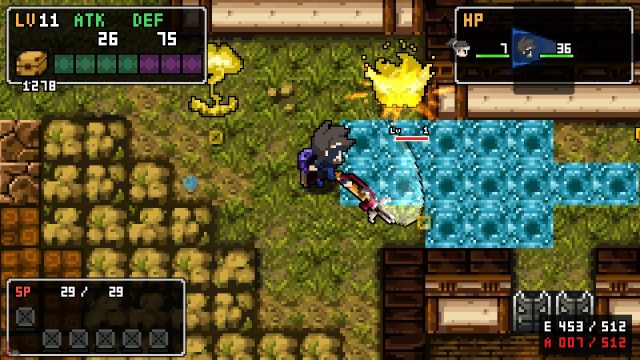 Pixel blocks arranged into larger tile blocks. Definitely a plus for the square lovers among us.

Graphically, ClaDun has a bright pixelated style that is unfortunately too simplistic and not detailed enough to fare well on today’s large screens. It’s blocky, without a cohesive visual integration of game tiles, lacks smooth animations, and lacks variety. Even on small screens, it leaves a lot to be desired. The soundtrack is actually quite good and varied, covering modern, historical eastern, classic JRPG, and action-packed electric guitar tracks. There is a notable lack of moody and serious tracks, but that is likely due to the game lacking appropriate situations in which to use them.

ClaDun Returns boasts great dungeon crawling with countless options for customization and optimization to take on any situation. It features a ~25 hour story campaign as well as endless side content. While combat is simple, the controls are responsive and the dungeon design is fun and increasingly challenging. Unfortunately, the game overall comes off as one-dimensional in this respect. It lacks any semblance of a narrative, and the small piecemeal levels and lack of a cohesive world don’t offer much in terms of exploration or immersion. It is also graphically unsuitable for the PlayStation 4 and large TV displays. Those looking for a pure dungeon crawl with both roguelike and standard dungeons will find that ClaDun Returns delivers way more than its fair share. Players looking for a more immersive, story-driven classic RPG experience should look elsewhere.