How well the full game fares will depend on how well all of its narrative pieces stand up, but the demo does enough to show that the base is there for it to be a success.

Path of the Midnight Sun is a hybrid adventure visual novel and turn-based RPG from developer Studio Daimon, planned to launch in less than a month. RPGamer was given the opportunity to try out a short demo of the game, getting a taste of both its combat and storytelling elements. While the nature of the game and its heavy narrative focus makes it hard to draw many conclusions from its brief two-hour demo, there are certainly enough elements of intrigue to generate interest.

Path of the Midnight Sun is set on the continent of Arvium and revolves around the threat of a Demon King. The Demon King was defeated sixty years prior, but couldn’t be killed. However, humanity found a way to trap the Demon King’s soul within humans called vassals. Although the game promises a story with three main viewpoint protagonists, the demo — covering one and a bit of its early chapters — focuses entirely on Lady Faratras Hoikade. Faratras is the current vassal for the Demon King, living in the kingdom Hoikade’s castle with her adoptive mother, Queen Munie, while being taught how to stay in control of the Demon King’s powers. However, a violent incident soon forces her to make her escape and seek both answers and allies. 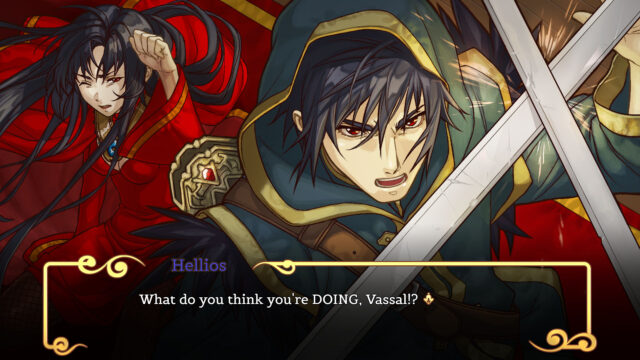 To be fair, cowering in fear is a reasonable, if unhelpful, reaction.

The game is divided between major event scenes, narrative exploration, and combat encounters. During narrative exploration, players are able to explore their current surroundings before activating the next main event, including talking to any NPCs, preparing their party by visiting shops, and using some light point-and-click mechanics. There is a light time element, as visiting additional rooms or places with run down the in-game clock, although the demo didn’t show any major effects from, say, taking extra time before visiting someone that may become important considerations later in the game.

These exploration sequences in the demo also provided an interesting first look at the game’s relationship and mental state tracking systems. In addition to changes occurring during event scenes, talking to other characters can affect both their and the protagonist’s mental states, and the developers promise that this will be important, affecting those characters down the line if their relationships or mental states are neglected. These also affect combat; for example, those with lower sanity will have lower damage output and mana recovery.

Path of the Midnight Sun’s turn-based combat system is a fairly straightforward one on the face of it. Up to six party members are involved against a group of enemies. Each party member gets one action, with orders given before each turn, though players can see the order in which their units and enemies will act. Skills in the demo either used up a portion of the fighter’s health, or their individual mana gauge, which replenishes at the end of each turn. 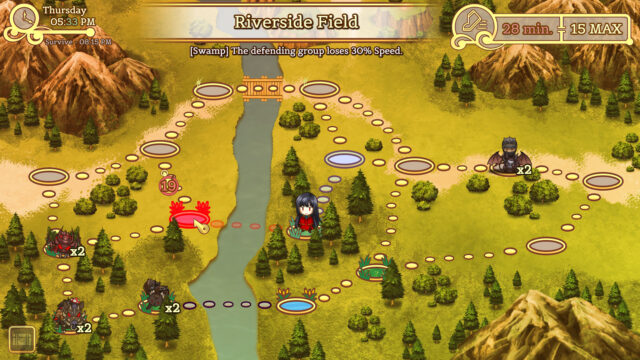 Time management is an important elements in the multi-phase combat encounters.

Where Path of the Midnight Sun differs from the norm is that the individual battles each form part of an extended encounter where in-game time management is key. The full encounter takes place on a noded map, with players giving an objective and a time-frame. Actions taken on the map, including moving and combat, takes up time. Players are given a certain amount of time that constitutes their “phase”, after this enemies will move and reinforcements potentially appear. There is an interesting strategic balance into deciding where and when to take enemies on, and careless players will find themselves hit by multiple waves of enemies, which can lead to multiple enemies phases at once, piling on the problems. The demo included a healthy set of five difficulty options, with players able to reduce but not raise it during a playthrough. The normal difficulty was decently balanced, though it did help highlight that taking on all enemies is not particularly wise, as one unnecessarily-taken run-in resulted in a very swift defeat.

Path of the Midnight Sun’s visuals are more rooted in the visual novel space, with character illustrations on 2D backgrounds and fully illustrated event splashes. The game makes use of the Live2D animation system to bring movement to its characters, which works well enough without heading into uncanny valley territory. It is not fully voice acted, but decent number of the lines are either fully voiced or have a notable phrase voiced that adequately conveys the tone, and the cast is a strongly experienced one.

The demo build for Path of the Midnight Sun was a useful introduction to its basic systems and premise. How the full game fares will depend on how well all of its narrative pieces stand up, but the demo does enough to show that the base is there for it to be a success. Players looking to get their fill of narrative adventure and turn-based combat will be able to pick up Path of the Midnight Sun on PC via Steam on January 10, 2023.