Following its launch in Japan in late 2020, Square Enix has released Octopath Traveler: Champions of the Continent internationally. The single-player free-to-play title is a prequel to the Nintendo Switch game Octopath Traveler, featuring the same “HD-2D” graphics from the original title as well as letting players form a party of up to eight characters to use in turn-based battles. RPGamer was given the opportunity to put some questions about the game and its music to producer Hirohito Suzuki and composer Yasunori Nishiki.

Alex Fuller (RPGamer): Is Champions of the Continent’s story structured in a similar way to the original Octopath Traveler? How does it connect to the first game?

Hirohito Suzuki (Producer, Square Enix): Thank you for this opportunity! Regarding the structure, the first Octopath Traveler and the latest Champions of the Continent game are the same in that players have the freedom to choose and advance a given story. However, while the first game was a story about the main characters, the latest game is a story about three evil bosses who are seized by human desires — wealth, power, and fame — and those who resist them.

Champions of the Continent takes place in the same world, a few years before the first game. It delivers a more mature storyline, with major events involving the entire continent of Orsterra. Characters from the first game also appear throughout, so I hope you can get the chance to play and enjoy the differences between the two games.

RPGamer: How did you go about crafting a story to fit the large cast and build upon the world of the original game?

Suzuki-san: The main character selected at the beginning will become the divine ring’s “Chosen One” and will need to confront the evil bosses who are the bearers of the other rings. Given the game depicts evil bosses and divine powers, we set out to portray major events that would shake the entire continent.

However, we also wanted to deliver the same type of experience as the first game, so we prepared “Traveler Stories.” At launch, there will be over 64 characters, all of whom have a story that provides a reason for their journey. 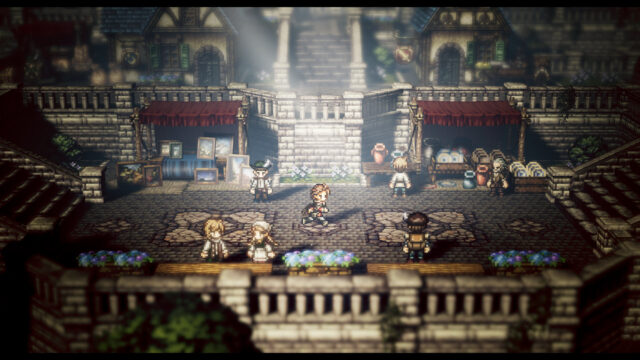 RPGamer: Are there any particular themes that you’ve aimed to work into the narrative?

Suzuki-san: The theme is “wealth, power, and fame” – the kind of “influences” people today also seek. Often, mobile games pursue a simple game design that is easily played, but this title began with a mission of delivering Octopath Traveler to as many players as possible, while also providing a solid “RPG experience.” Please relish this profound scenario that adults could also enjoy.

RPGamer: Are there any interesting inspirations behind the story or some of its characters? Do you have any particular favorite characters?

Suzuki-san: Regarding boss characters, I particularly like Auguste, the playwright, who is the master of fame. I don’t have as dangerous an ideology as his, but I’m also a creator, so there are some views I can relate to…

In terms of protagonists, I like the Octuplet. The main characters from the first game also appear in their story, so I’d love for you to try playing.

Suzuki-san: The HD-2D pixel art style meshed very well. This game adopts a dark story with many dark developments, but because it’s performed through pixel characters, I think we were able to depict what we hoped to achieve in our storytelling through symbolic expressions, leaving much of the detail to the player’s imagination. If the game’s visual style incorporated 3D characters, I’d rather not think about this, but I assume much of the scenario would’ve needed modifications. 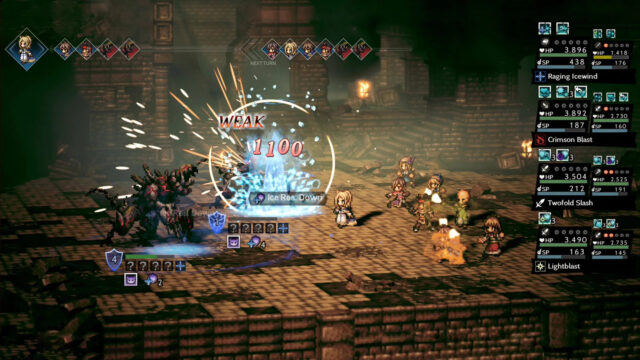 RPGamer: How does Champions of the Continent build upon Octopath Traveler’s combat system?

Suzuki-san: The well-received Break & Boost system from the first game has been retained while adopting an eight-party member battle system where players switch between vanguard and rearguard. This allows players to accumulate twice as many Boost Points, which enhances attacks for faster battles. Furthermore, some abilities activate when units are either in the vanguard or rearguard position, so I believe players will be able to enjoy even more strategic battles.

RPGamer: How challenging is it to balance the game with both a large roster of playable characters and eight-member parties?

Suzuki-san: To ensure that as many players as possible can enjoy the main story, we did not make any adjustments that would require specific characters to advance, just for the sake of monetization. Therefore, it was rather difficult to prepare a boss enemy that would be challenging no matter the party composition. Also, with so many characters, it was difficult to make each character appealing with their own standout characteristics.

RPGamer: Are there any new gameplay elements introduced in Champions of the Continent or were any altered to make it fit better on mobile platforms? Can player choice impact the game?

Suzuki-san: The theme of this game is “influence,” so increasing your influence rank through various means leads to gaining recognition from NPCs around town, enabling you to execute path actions. Depending on whether each NPC values wealth, power, or fame, the negotiation method will also change for the path actions in this game. (If wealth is important, you would purchase goods or hire that person.) Whether your choices will affect game progression… that’s something I cannot discuss at this time. I hope you’ll play for yourself to find out. 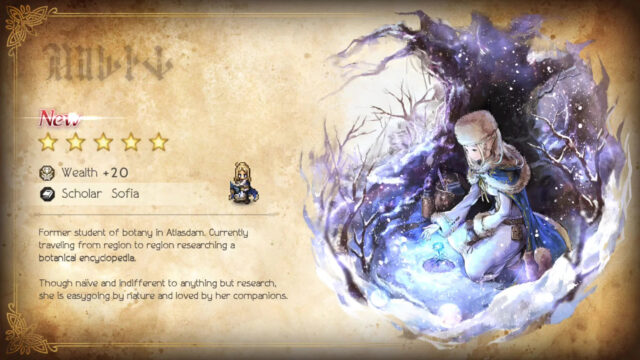 RPGamer: Can you talk through some of the major themes and ideas behind the game’s music?

Yasunori Nishiki (Composer, Square Enix): If HD-2D is defined by the concept of expressing classic pixel art in a modern way, then the music is similarly based on the concept of updating the impact felt by classic, pixel-based RPGs for the modern age. While some arrangements are orchestral and luxurious, we aimed to create a nostalgic sound with easy-to-understand melodies.

Nishiki-san: I think our attempt to seamlessly transition from each character theme to the boss battle music, which we call “battle extend”, is a unique element. Octopath Traveler is a game with eight protagonists, so there are also eight  people’s worth of thoughts and impetus for engaging in battle. Therefore, instead of preparing a battle track for each of the eight protagonists, I believe the direction of creating a prelude for each of the eight protagonists was an expression unique to that title. This “battle extend” is also carried over to Champions of the Continent. Since there are many protagonists, rather than providing a unique intro for each character, we prepared several introductions with different tensions according to the scenario, which led to a specific boss battle track.

RPGamer: How easy was it to create a musical score that builds upon that of the original game?

Nishiki-san: The musical direction for Octopath Traveler was already established with the first game to a certain degree, so I was conscious about expanding that world further with this game. In that sense, I believe I was able to create the musical score in a very relaxed manner.

I especially enjoyed creating the music for the evil yet fascinating villains, and it was exciting to challenge myself to create tunes that I could not attempt with the original game.

RPGamer would like to extend our deepest thanks to Hirohito Suzuki and Yasunori Nishiki for taking the time to answer our questions. We’d also like to thank Fortyseven Communications for setting up the interview. Octopath Traveler: Champions of the Continent is now available worldwide on iOS and Android.