Nadir is a very dark and eerie game.  With a Gothic atmosphere and grotesque enemy designs, it definitely hits those notes perfectly making the aesthetic alone well worth checking out.

Shockwork Games is growing a reputation for interesting dark and Gothic-inspired titles.  Nadir is its latest project, with a demo currently available on its ongoing Kickstarter campaign.  The build showcases an energetic roguelike deckbuilder, featuring constant visual charm and a metal soundtrack that loops over to highlight some unusual takes on typical mythological enemies.  Combat has some varied options leading fights to rarely feel the same, but it can feel overreliant on luck.

The demo begins with a team of three playable Avatars: The Leader, The Poet, and The Virgin.  Players are given five in-game days with which to take on enemies or let the Avatars rest.  There are three tiers of challenges for combat, these only provide optional difficulty increases while showing off unique enemy designs.  Once the five days are over, players are sent into a boss fight against the area’s guardian, Cerberus.  Paying attention to the day count and knowing when to try and get stronger or when to rest is important for determining success.

One interesting aspect in the demo is the ability to modify the game.  The download provides an easy tutorial PDF and opening specific files in a program like Notepad allows stats for cards, Avatars, and enemies to be changed just by modifying the numbers in the file.  It’s an engaging touch that makes the demo much more re-playable. 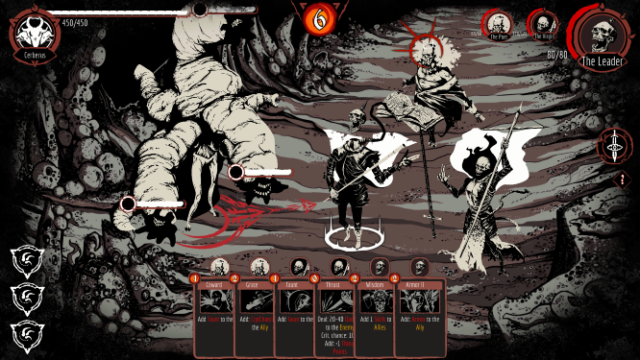 Time to take on the Cerberus.

All battling in Nadir is done with cards.  Each living Avatar draws a maximum of two cards per turn for up to six in the player’s hand at a time.  Unused cards remain in the player’s hand, with the additional cards first coming from Avatars that don’t have two cards remaining from the previous round.  These six cards’ effects vary from damage-dealing to applying debuffs to enemies or buffs to the Avatars.  Buffs largely focus on adding defence to an Avatar or or taunting to have the enemy change their target.  Debuffs largely affect accuracy or how strong the enemy attacks will be.  Each card in the hand has a number in the top-left that details how much Threat it will cost to use it.  The player starts each turn with three Threat points, but some cards can add more for combo purposes.  When the Threat counter reaches zero, the turn ends.  Finding the balance between what cards to use and when to use them can be the key to defeating the enemy or surviving the next turn.

With no customization in the demo, each Avatar brings skill set to balance the deck as a whole.  The Leader adds mostly armour-up and taunt cards, acting largely as a support unit.  The Virgin brings a little of everything to end up as the most well rounded.  The Poet brings with him the most effective attacking options and the best sources of healing as well.  Each card drawn can be used by any Avatar and they can act more than once in a turn.  Planning which Avatar will be the focus of enemy attacks, and which one will be dishing out most of the damage is where much of the strategy comes from.  If The Leader dies then it won’t be easy to prevent later deaths, if The Virgin dies so does a good chunk of the offence, and if The Poet dies there goes most of the health recovery.

While players can have a big influence, ultimately the game feels at the mercy of luck.  Some runs end really quickly due to a lack of useful cards in the draw.  In others, the enemy does not even get a chance to blink due to the strong damage-dealing possibilities available from the start of combat.  The demo does not contain a discard option either, leading to players using cards and precious Threat points for little purpose simply so they can draw another next turn.  Such wasted moves can be vital, as nearly every unguarded hit to an Avatar is fatal. 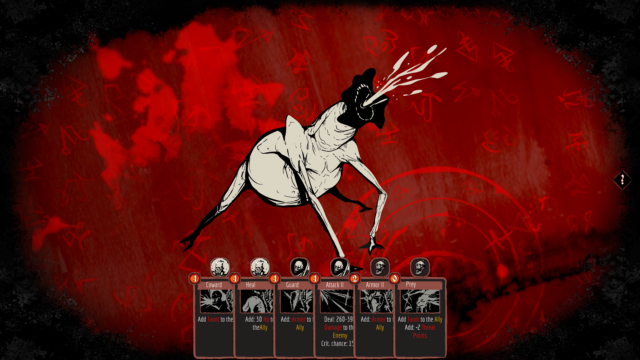 Witness the entrance of a Frog.

Nadir adapts a comic book style with harsh lines and sharp colours to accentuate the monstrosities that the Avatars come across, while simultaneously highlighting each Avatar design.  These monsters are not the garden variety versions either, with the artwork for even recognizable monster names being misshapen and grotesque, adding to the visuals.  The dark colour scheme lends itself to the very macabre atmosphere, something heightened by the constantly playing metal soundtrack that keeps energy high in a frenetic manner.

Nadir is a very dark and eerie game.  With a Gothic atmosphere and grotesque enemy designs, it definitely hits those notes perfectly making the aesthetic alone well worth checking out.  The basis of a fun combat system is here, limited as it is with only five fights and a boss to check out.  The combat system currently feels overly reliant on luck and expanded modding options could also go a long way to enticing players.  However, for such a small time commitment, it’s easy to recommend giving this title a chance and playing through it once, especially to fans of the game’s art style.