Even though the heroine didn’t remember having an uncle (dead or otherwise), she attends his wake in a seaside manor.

For many RPGamers, chunky 8-bit pixels or their 16-bit descendants are the go-to for a shot of visual nostalgia. World of Horror draws its inspiration from a deeper, darker well. The MS Paint-style graphics evoke 1- and 2-bit games from the glory days of Mac shareware. Paweł Koźmiński, the sole developer, explains, “You’ve got enough details to know what’s going on, but you have to fill in the blanks yourself.” Several color palettes are available, allowing the player to literally fill in many of the blanks with ironic pinks or somber shadows.

Many of those details are bloody and uncomfortable-looking. Cosmic dread of the Lovecraftian sort blankets the small towns and isolated haunts of the setting, but it most often manifests as visceral body horror more akin to Junji Ito and Japanese horror from the 80s and 90s. 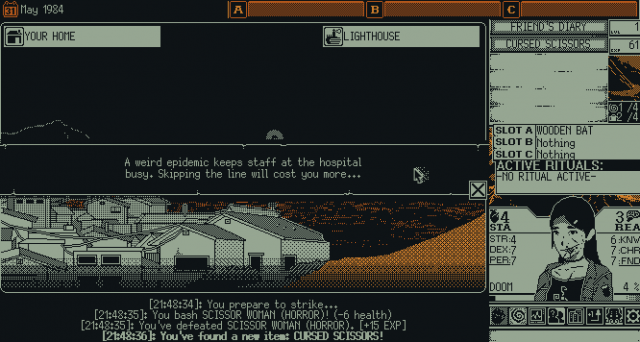 The final release, which is being published by Ysbryd Games, consists of several mysterious vignettes. One of these mysteries, which revolves around a beautiful classmate and a pair of scissors, is currently available as a public demo. Another mystery, which was available for the first time at PAX West, centered on an unexpected invitation to a wake. Even though the heroine didn’t remember having an uncle, dead or otherwise, she attends his wake in a seaside manor. Soon, she finds herself unable to leave.

Gameplay consists primarily of exploration and combat, punctuated by seemingly random, and often disturbing, events. These events give an emergent element to the otherwise scripted stories. Exploration includes moving between locations, talking with NPCs, purchasing equipment, and managing time. There are many ways to fail: time passes with certain actions, bad things happen when the DOOM score gets too high, and gaining an occult edge may require sacrificing both Stamina and Reason. Each character’s secondary statistics (strength, dexterity, perception, knowledge, charisma, etc.) come into play during skill challenges.

Combat is turn-based and quick. Each turn the player creates a string of actions from several menus, including physical (kick, normal attack, heavy attack), occult (cast a ritual, pray, clap), and social. The action point system is nuanced and encourages players to test several loadouts before selecting the one that minimizes waste while still looking for an unexpected edge.

Each mystery in World of Horror has two to five endings, encouraging replayability. For example, the unexpected wake from the PAX demo requires two people to die before anyone can leave the manor. One ending, the one I achieved, requires surviving at the expense of your fellow mourners. A second ending stems from performing a bowing-and-clapping ritual throughout the night, presumably blunting the occult influence. The third ending likely just requires dying before everyone else — but stranger things have happened. 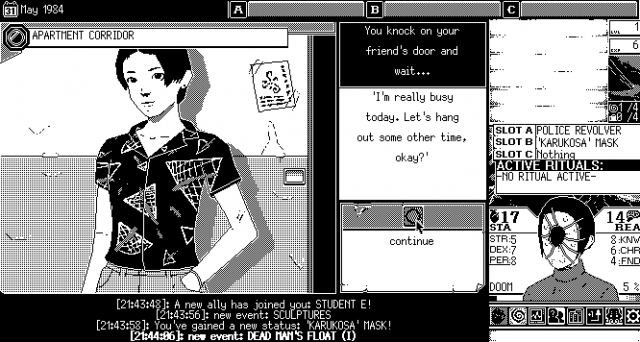 Koźmiński explains the game is more or less complete, but wants to add further polish before its release. “A game like this is never done. There’s always room to improve and add more stuff. I’m really trying my hardest to say, ‘OK, that’s it. The game’s done.'” It’s slated for release on Mac, PC, PS4, and Switch by the end of 2019.