The first of the new characters is Garett Van Dyne. He is a military officer in the Neuhafen Principality. His nation is at odds with that of Quinn, the protagonist’s. Rumour paints him as cruel and heartless, though his actions prioritise the safety of his subordinates. The second is Darius Kendrick, an ally of Garett, who wields a giant axe. Third is Ace Nightlok, another ally of Garett’s, who specalises in long-range combat. Finally, Erin Van Dyne is Garett’s daughter who followed him into the military and is herself an engineer who specialises in high explosives. 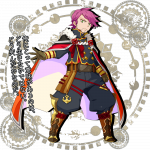 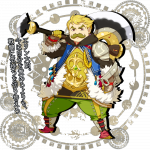 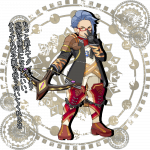 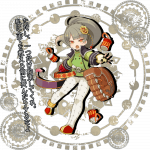 While exploring the desert to try and find the great power that may save humanity, Quinn will come across various impediments. However, she is able to use an artifact called the Lunar Gear that can utilise the elemental orbs to overcome these. For example, equipping a fire orb will let her burn things, melt ice, or light street lamps in some of the ruins. Some obstructions may require the use of multiple elements.

Quinn and her allies will also come across mechanical creations — and other threats –that will not only block their progress but actively attack them. Some of these will be weak to various actions that Quinn can do in the environment, such as one particular enemy in an abandoned down that it weakened by light. Re-lighting the aforementioned street lights will cause them to become weaker and let Quinn defeat them.

Arc of Alchemist is set to be released in Japan for PlayStation 4 on February 7, 2019, and sees the developer team up again with Yoshitaka Amano for its concept art after he previously contributed to 2013’s title Fairy Fencer F. No announcement has been made regarding a western release.