Only in recent years has Nihon Falcom become known enough outside Japan for its games to receive regular localizations. Zwei: The Arges Adventure was originally released in 2001, back when comparatively few people remembered Ys, let alone a newly created IP. XSEED Games took a big chance localizing this title in 2018, but at least Zwei finally made it across the Pacific. I wouldn’t rank it anywhere near Falcom’s best, but don’t regret having played the game.

The village of Puck is fairly isolated from worldly concerns until its treasured collection of six idols representing the major elements is stolen. A masked man is responsible for the theft, and refuses to divulge what would make him take this sextet of what seems to be purely ornamental statuary. A duo of fourteen-year-old sibling prodigies named Pokkle and Pipiro step up to retrieve the idols when a sizable cash reward is offered, but doing so will require traipsing all over the land of Arges.

XSEED’s localization is entertainingly written, and gives the lead duo plenty of personality. Pokkle’s propensity for puns is amply displayed, and Pipiro’s lazy fashion-centric worldview is entertainingly rendered. The characters with whom they interact are also an engaging bunch, which makes progressing through events pleasant. This helps to compensate for the overall tale conforming to a standard format involving the stolen artifacts being far more important than it initially appeared, along with having some dry patches throughout. 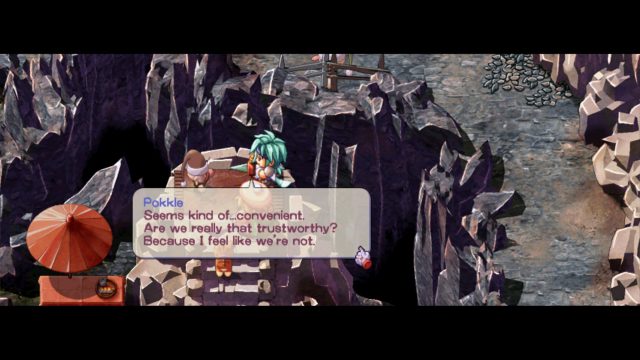 This is unlike Pokkle, to refrain from a pun. If only a tree was nearby so he could say con-ven-i-ENT.

The Arges Adventure is an action RPG with some interesting aspects. Pokkle and Pipiro share a single health bar and move about as a pair, though the player can only control one at a time. Pokkle lunges at enemies with a melee strike while Pipiro fires a variety of magical attacks that affect enemies according to elemental affinities. Adversaries can cough up money and items upon defeat, but experience is only gained via ingesting some food.

Combat itself is not one of Nihon Falcom’s better systems. It’s entertaining to blast through enemies quickly, but the absence of any invulnerability period for the player after being hit means getting killed is incredibly easy. Opponents also seem to come out of nowhere, due to the field of view being a little too zoomed-in. Battling generic opponents is mostly fun until something comes along to execute the player in the blink of an eye, although at least the penalty for death is losing some money instead of a complete Game Over. Bosses can be nasty customers too, with their powerful strikes and the lack of invulnerability making it very easy to get killed if inattentive. 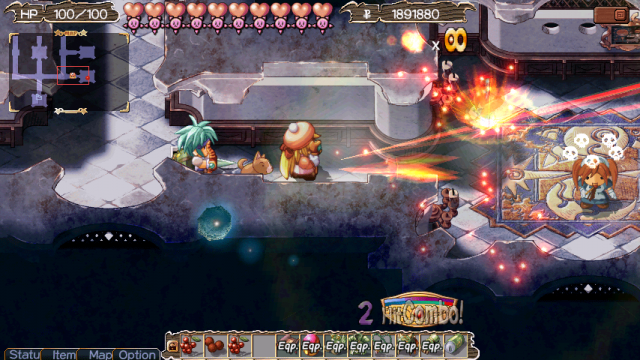 Five skulls floating around that enemy’s head means it can be hit five more times before it disappears. What’s the significance? I DON’T KNOW.

Consuming edibles to gain experience is an interesting system that lends itself to a bit more strategy than usual, as ingesting the foodstuffs heals along with advancing towards a new level. The Arges Adventure‘s limited inventory makes it tough to take advantage of a function in town that exchanges ten identical pieces of food for a single one that gives more experience. Having a limited inventory makes preserving the crucial ten for exchange difficult at times, especially when all pieces of equipment are counted among the available places.

Navigating the land of Arges takes a little practice, because the dungeons are constructed so that multiple entrances to different parts exist. There is some leeway in which place to visit next, but the game is often a bit vague about providing guidance. Specific items are often needed to access areas of the dungeons, but how to enable them is left for the player to discover. It’s far from the most inscrutable game ever released, but manages to be inadvertently puzzling on occasion.

RPGs in 2001 were very happy to use 3D models in an attempt to push the visual envelope, so The Arges Adventure‘s use of sprites distinguishes it from its contemporaries. Enemy sprites tend to be deceptively cute, while every NPC’s is unique. Dungeons unfortunately feel quite similar, as aside from palette changes the core structure of corridors and slightly larger rooms is repeated throughout. Much of the scenery is indeed quite pretty to behold, and a few unique gimmicks are sprinkled around the environments, but the design could have been varied much more. 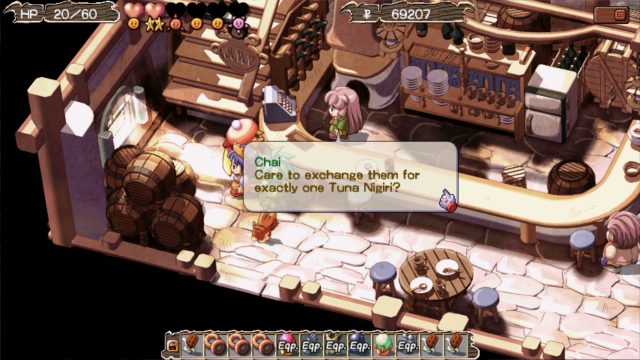 Nihon Falcom is known for providing quality soundtracks. The Arges Adventure is no exception to this, and the wide assortment of tunes is always pleasing to the ears. XSEED even included the rearranged version of the soundtrack from a 2008 PSP rendition of the game, something that can be selected at any time. The two distinct ways to experience this game’s audio, since the arrangements and instrumentation substantially vary how the tracks play, makes it very difficult to get bored while completing the relatively short title.

I enjoyed Zwei: The Arges Adventure somewhat while playing it, but in retrospect a lot of the mechanics weren’t great. The game definitely has its share of charming material and I applaud XSEED for taking a chance on localizing it seventeen years after its original release. Even though it has the ability to propel foes into the air and keep attacking before they can land, along with the ability to gorge on sweets and get stronger, this isn’t among Falcom’s stronger titles.