Ain’t No Cure for the Cloning Blues

Spike Chunsoft has risen to prominence in recent years thanks to efforts like Danganronpa and Zero Escape, among others. Its latest entry to arrive in the west is a dungeon-crawler created alongside Lancarse, developer of Lost Dimension, titled Zanki Zero: Last Beginning. Some themes and elements certainly follow along the lines of the Danganronpa series, which has a few of its key staff members involved here, such as the attempts at shocking reveals and an overall classic arcade feel to the UI. However, despite bringing plenty of ideas and a deep set of systems, Zanki Zero never quite coalesces into a strong all-round experience; instead, many of its elements just seem to float on top of each other for an enjoyable but not resolute offering.

Zanki Zero: Last Beginning takes place on Garage Island, a floating island in the middle of the ocean surrounded by ruins. Eight people find themselves waking up on the island, and it is quickly revealed through a TV show broadcast that humanity has been wiped out and these supposed remaining people are cloned creations. Furthermore, all except one of them have reduced lifespans of just thirteen days, which includes an immediate and painful aging process, with survival further hindered by life-threatening dangers that fill the nearby floating ruins. Fortunately, the island has a special Extend Machine that will revive them with their memories intact as long as someone is still alive to retrieve and place in the machine the X Keys that are embedded where all of their belly buttons would normally be.

Each chapter takes the viewpoint of one of the island survivors as they go through the next set of ruins to drift to the island, each of which has a strong connection to said survivor and their supposed past sin, based on the seven deadly sins. The combination of the island ruins, coupled with videos of the characters’ past provided by the Extend TV show, creates a sense that not all is as it seems, but the cast ends up with little choice other than to follow the instructions from Extend TV and investigate the ruins if it wants to do anything other than be stuck in that cycle. 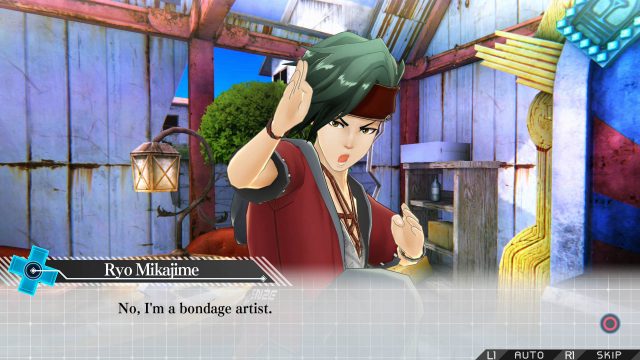 As one would expect from Spike Chunsoft at this point, there’s a curious mix of characters.

Zanki Zero relies too much on shock value, making it feel like an attempt at papering over a fairly weak and ultimately quite silly overall plot. The hosts of Extend TV, a young boy named Sho and a sheep named Mirai, attempt to add humour, which is sometimes successful but many other times just bizarre and downright grating. Later reveals cast some interesting light on how the world got into its current state and why these particular people are chosen, but also comes at the cost of relegating earlier key points to red herrings and rendering them ultimately pointless.

Fortunately, the interactions between the characters are enjoyable. Zanki Zero does a nice job of building up camaraderie and creating and resolving inter-group conflicts, which is just as well as there’s no outside force to generate those conflicts until the very end. The final sequences wrap a nice emotional bow on everything, but it’s not enough to fully salvage the plot’s odd earlier steps and some rather poor justifications and characterisations on the part of the antagonists.

Zanki Zero has an awful lot of systems for players to work both with and against. The game features first-person grid-based exploration, with combat taking place in real time. Players can have up to four members in the active party, but members can be swapped in and out at any time. Most attacks made by the party will be in melee range, which only strikes the enemy directly in front, though there are some ranged options with ammo requirements. Each attack button press causes the current active character to attack, though it will automatically swap to the next character if the active one is waiting to recharge their attack. This is complemented by a more powerful charge attack made by holding down the attack button; holding it down longer lets others join in the attack for a more powerful combo. Players can also unlock further enhancements called Clione that are surgically implanted into characters by the Extend Machine to unlock extra special abilities, though the control system makes these more awkward to use than they could’ve been.

Charge attacks are very useful for helping to disable enemies, many of which have body parts that can be destroyed, preventing them from using certain attacks. This is particularly important for boss fights, which easily provide the most interesting battles of the game. In addition to the powerful attacks that party members will need to mitigate by destroying parts before they have any hope of defeating the boss, there are often tricks to the battlefields that also need to be overcome or taken into account. On the other hand, there can be some very annoying random encounters. All enemies can hit very hard and combat is always about moving into and out of range very quickly. This is fine in the boss fight arenas, where there is space to move around in, but it can be annoyingly easy to get stuck in the cramped confines of many of the regular ruins with little option than to either retreat or load a save — in addition to infrequent save points, there is an autosave that kicks in every time players change maps or floors. 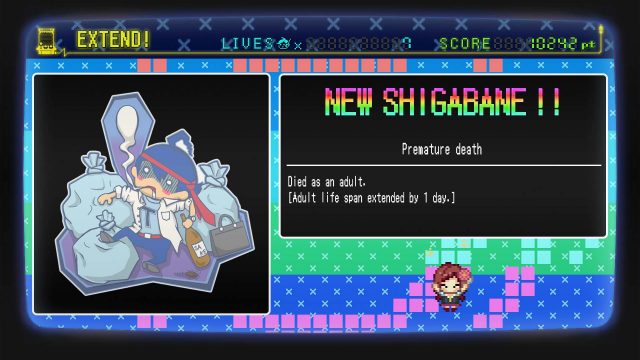 The game is all about dying. Many times. Unless playing on the trivial difficulty, in which case only sometimes.

As players progress through dungeons, days will pass and characters will age. Each stage of life has different benefits and drawbacks; for example, in the child stage characters will be weaker and able to carry less with them. Dying is a fundamental part of the game and a key element to improving characters. This is fine for those who don’t mind frequently retreading their steps, but the less patient will find that aspect a potential source for frustration, particularly when certain enemies show up later on, such as those that silently rush the player when out of vision. The basics of combat are easy to get the hang of, but there is not much to it after that point and it leaves players with very limited tools to actually get out of a tough situation. The game is more about trying to prevent getting into situations than offering tools to overcome them.

Combat isn’t the only thing players will have to keep a handle on. Item management and crafting play important roles, with each character having both a weight limit and maximum of eight sets of items they can carry. Characters not in the active party don’t have to worry about weight limits; however, if anyone dies then all items and equipment they have are dropped and will either need to be picked up by others or left in the dungeon in the hope that players can return to grab it once the character is revived. Players may also need to keep on top of their party’s stress, bladder, and stamina levels. Wandering around dungeons and being in combat will use energy, which can be replenished by food, but this in turn will put the character in potential need of finding a toilet to relieve themselves. Not keeping on top of this can result in rather unsanitary deaths.

With all of the ways to die in the game, it would be most annoying if there wasn’t at least something gained from it. Thankfully, Zanki Zero provides this in the form of “Shigabane”. Whenever a character dies from some new element — such as dying to a particular creature, particular attack, while suffering a status effect, in a certain age range, etc. — they receive a new Shigabane from the Extend Machine. This grants an appropriate passive bonus such as resistance to that type of attack or creature, an increase to defence or attack, or even an extension to their lifespan. First encounters with new enemies will almost invariably result in death, but this provides some solace as at least something beneficial comes out of it. Further character growth comes from regular experience-based leveling, which also grants skill points that can be used to add passive bonuses or new abilities to aid survival such as crafting or cooking. 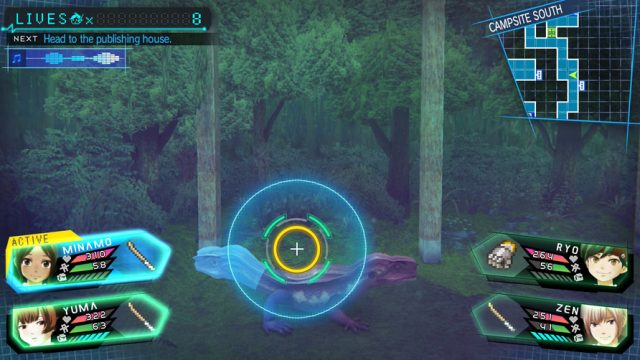 The end of humanity has led to some interesting fauna.

Zanki Zero is designed to be challenging, and it certainly is for the most part, but the way the systems are set up makes them feel stacked on top of each other rather than being fully connected. Perhaps the best showcase of this is its somewhat arbitrary difficulty system that simply turns various subsystems off or on, with the lowest difficulty — added post-release in Japan — simply giving up and removing all elements of combat and danger, turning the game into an almost straight visual novel-slash-pathfinding game. Higher difficulties promise extra rewards, but these don’t really provide any extra benefit to make up for the loss of a comfortable difficulty.

The visuals feel more functional than anything, but the game is nice to look at with good variety across its locations and some neat designs in the characters and enemies. The usually switch-based pathfinding puzzles are enjoyable and well thought out, though get highly frustrating when enemies insist on becoming barriers to progress in tight areas. Some of the controls and UI elements are awkward and tough to get a handle on, particularly for item management and some of the deeper elements, which adds to the feeling that they are just there to add difficulty instead of integrated depth. Zanki Zero‘s audio is understated; voice acting is decent but limited to key scenes and the Extend TV portions of the game, a decision that may have been made in part due to the need to accommodate characters being in different life stages with different voices. Meanwhile, the music can go entirely unnoticed by players, but again this appears to be mostly as a result of audio cues being an important element of exploration.

Zanki Zero doesn’t offer as wide of an appeal as it could, but it will still likely be able to find a dedicated following that appreciates the layers of challenge it offers. It will work well with those who enjoy having to manage multiple systems, but many others will find the juggling frustrating, particularly when the UI and controls make it more difficult than necessary. Meanwhile, an overall reliance on shock tactics coupled with a general lack of strength in the themes means the narrative simply doesn’t have the weight behind it that many would’ve hoped for. However, there is an appreciation to be had that Spike Chunsoft and Lancarse have come in with plenty of ideas, even if they don’t stick the landing quite as well this time around.