Ys: Memories of Celceta is a good game, and has been since its original release on PlayStation Vita back in 2012; our review archive holds no shortage of testament to that fact. The game’s quality isn’t really what’s in question here, but rather how a slightly modernized rerelease of the game on current-gen hardware (right before it becomes last-gen) fares. Is it a worthwhile purchase for players new to the fold? Absolutely. Will new and returning players alike have a good time with its fast-paced action combat and simple yet effective story? Definitely. Does it offer enough new content for it to still be a worthwhile addition for returning veterans’ game libraries? Well, not really.

Like another well-known fantasy RPG series, the numbering of some games in the Ys franchise is a little less than clear-cut. 1993 saw not one but two very different iterations of Ys IV released — Mask of the Sun and Dawn of Ys — both outsourced by Nihon Falcom to other developers. The years that followed saw still further iterations of Ys IV either announced or released by different developers, though all shared some structural bits of DNA, such as some characters, locations, and even plot elements being present in one way or another. Despite not bearing a number in its title, Memories of Celceta is Nihon Falcom’s way to wipe the slate clean and is considered to be the canonical fourth entry in Adol Christin’s chronicles of his world travels.

The game that follows is a little on the tropey side, but presented in a way that isn’t all that irksome. As it begins, Adol finds himself in the frontier town of Casnan, in the land of Celceta, with no memory of how he got there. The aim, at least early on, is for Adol to recover his lost memories by heading into the foreboding forest from which he appeared, finding and collecting glowing orbs that restore his memories one at a time. Luckily, the local government representative, Governor-General Griselda, is hiring teams of would-be explorers to enter the forest, of which it is said nobody else has ever returned alive, and map out this unknown land. As the player reveals more and more of the map, a percentage counter increases, acting like a visual marker of progress, and giving a constant sense of accomplishment toward a larger goal, something that’s not to be taken too lightly during the game’s early hours. 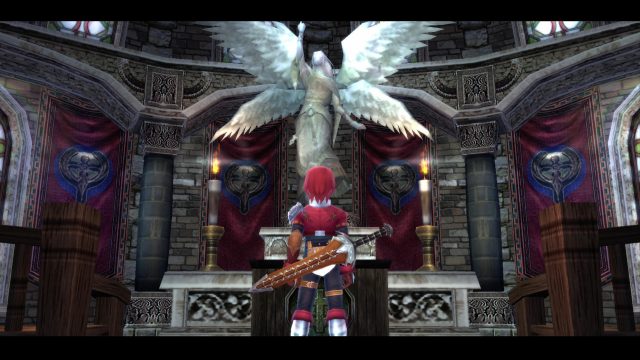 Retracing Adol’s steps through the Great Forest of Celceta to help him reclaim his memories is, at least, an acceptable way to handle the amnesia trope.

Combat during the early portions of the game is quite basic. At its core is a very simple action mechanic involving attacking, dashing, and defending, with the six playable characters utilizing three different weapon types that correspond to a very basic system of enemy weaknesses: slashing, piercing, and striking. Dodging or defending can grant a momentary boon in combat if performed with impeccable timing. It’s simple yet effective, and so fast-paced that it feels almost arcadey in execution. Players only ever control one character from a party of three, though the party can be switched up at any point outside of boss battles. Switching between the three active party members to take advantage of weapon affinities is as simple as pressing a button, while the two other party members are controlled by a capable AI that can be quickly toggled between offensive and defensive modes. Minor notable setbacks from this system occur when AI-controlled party members choose to split up and target different opponents, or get momentarily snagged on a bit of terrain and can’t keep up. This doesn’t happen often, but occasionally the party of three may be temporarily down to two during a combat encounter due to AI hiccups.

But it’s not long before the more complicated aspects of the combat system, which seem superfluous when first starting out, start to be useful. Each character learns a number of skills, which can be mapped to the four face buttons and consume a shared SP bar when used. The goal is to build up the SP bar during regular combat, in order to use skills for more damage. Moreover, causing damage with skill attacks further builds up yet another meter, the Extra gauge, which can unleash an ultra-powerful one-time attack but takes a while to refill. It seems much more complicated than is strictly necessary early on, but this system really comes into its own during later, more difficult battles and boss encounters. Bosses are uniformly large and well-designed encounters with intricate movement and area-of-effect attack patterns that require a good amount of mobility and reflexes to master. Whereas the majority of the game’s combat encounters are fairly simple, provided one makes use of inherent enemy weaknesses, boss encounters raise the difficulty curve somewhat, and become a memorable highlight for the title.

Apart from being useful against enemy weaknesses in combat, Adol’s five eventual companions also have unique abilities that are used during overworld exploration and dungeons to help with attaining loot or opening new paths forward. For example, the information broker Duren, Adol’s first companion on his adventure, is able to open locked treasure chests. The spunky knife-wielding Karna, on the other hand, can target faraway objects and dislodge them, creating new pathways. While this is on occasion used as a kind of puzzle element to break up the combat loop, it isn’t implemented as consistently as one might want. Some characters are only ever called upon to use their abilities a handful of times, so the focus remains solidly on action as opposed to puzzle-solving. In terms of narrative, however, his five companions are arguably more interesting and receive greater character development than Adol himself, likely due to his memory loss. Though he is the driving force that moves the plot forward, he’s ultimately a visitor in everybody else’s stories, passing through on his way to the next installment. Occasional flashbacks into Adol’s childhood and references to earlier events on the Ys timeline, however, are a welcome touch. 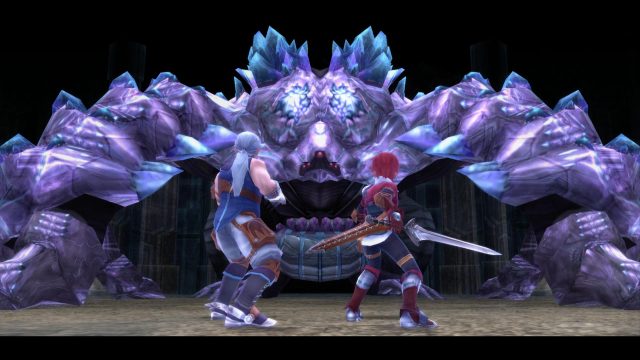 Boss battles are fun, challenging tests that require mastery of each aspect of the combat system to overcome.

The game’s graphics received the most attention in this updated version. It’s nothing on the level of a full remaster, but character models, textures, and interface elements looks a bit sharper and feature more vibrant colors. Other than that, the game largely does look like a product of older hardware — it’s not lacking, but noticeable. There is some post-game content available in the form of a New Game Plus mode that carries over most progress, as well as a timed boss rush mode that becomes available after starting a second playthrough, but no exclusive new content specifically for this release. The base game is just as much fun as it always was, but those looking for an augmented play experience won’t find one.

The original release featured a few select lines of voiced dialog amidst the otherwise purely text-based conversations. Despite other games brought to current-gen hardware recently having set a precedent of receiving more voice-overs, Memories of Celceta does not benefit from such treatment. Each character — excluding Adol, of course — still only has a few select voiced lines, just as before. A switch to Japanese voiceovers is also possible, though this alternative yields the same every-once-in-a-while voiced lines of dialog. While that’s a little disappointing, the soundtrack music continues to be as high-quality as ever, with more than a few tracks that are outstanding earworms.

Ys: Memories of Celceta was and continues to be a highly engaging action RPG that makes a great addition to the franchise. Its best selling point is its combat system, which offers up a compelling and smooth flow of button-mashing fun, highlighted by boss battles that stand out with higher difficulty and require a defter handle on the system’s more intricate aspects. Nice graphics, a tuneful soundtrack, and an interesting supporting cast, each with their own compelling stories, round out the package that should be a no-brainer for those who haven’t yet played it. Those looking for an expanded revisit from previous iterations, however, should know that there isn’t enough new content added to this release to make it worthwhile of a whole new purchase.