By comparison to their undead cousin the zombie, vampires do not nearly get the same amount of representation. They do have the distinct advantage of being far more interesting to adapt as a player character. Their autonomy, unique abilities, and natural limitations make for an engaging design element from which to build a game. Dontnod Entertainment has now thrown its hat into the ring with Vampyr, an action RPG that embraces the monster of folklore in a setting befitting of its legendary nature. This makes a game that is distinct in its identity but falls short of entirely delivering on its admittedly promising premise.

Set during the height of the Spanish flu epidemic that plagued London in the early twentieth century, Vampyr features Jonathan Reid, a premier surgeon recently returned from the front lines of World War I. Soon after his arrival, he is attacked and transformed into a vampire. The traumatic nature of the change robs him of the memory of his attacker and situation. In this new state of bloodlust, his first victim as a vampire is his sister. On the run from the law and in a fraught mental state, Jonathan is taken in by Doctor Edgar Swansea, who offers him a job at Pembroke Hospital. 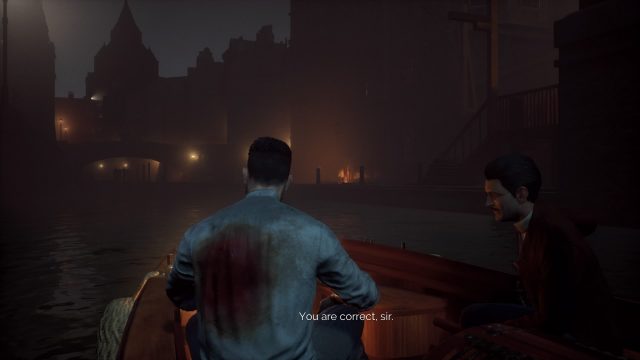 London doesn’t get much brighter than this.

It’s then that the game’s limited but dense take on London begins to open up. As a newly minted vampire, Jonathan is limited to prowling the city at night. With the general populace fast asleep, the streets are filled with various skals — low-powered, animalistic vampires that aren’t cool enough for the full repertoire of abilities — and members of the Guard of Priwen, an organization of vampire slayers. More advanced vampires appear as the game continues, but skals and members of the Priwen will comprise most of the enemies encountered throughout the game. Conveniently, vampires and the Priwen members will fight each other if they happen across one another. Inconveniently, they will primarily prioritize Jonathan.

For taking up as much of the game’s running time as it does, combat in Vampyr is very hit or miss. Jonathan has access to various one-handed, off-handed, and two-handed weapons, each with different makeups of damage, stun damage, or blood siphoning. Stun damage deals damage to an enemy’s stamina bar which, when empty, will leave an enemy open to being bitten, restoring some of Jonathan’s health and blood. Blood is used to activate vampire abilities and can also be gained through the use of some weapons. These vampiric abilities help to shake up combat and offer powerful combat tricks such as teleporting dashes, shields, throwable blood spears, and invisibility. There are also several incredibly powerful ultimate attacks that are tied to a cooldown but can help to maintain control during a fight.

It’s unfortunate that the combat can’t quite remain interesting throughout the entire game. Early on new abilities come frequently but by midgame they taper off in favor of reinforcing existing ones. Part of this is Vampyr’s surprising ability to keep combat difficult throughout the game. Fighting random enemies on the street offers only meager amounts of experience. The primary means by which Jonathan obtains experience is feeding off of the major NPCs that populate the game. Many of them start off worth a considerable amount, but completing side quests for them and learning more about them will make them even more valuable. However, killing off NPCs will have a downside as each of the game’s four districts is tied to the health of its residents. Lose too many and the vampire presence in each of them becomes worse and worse, making traversal more difficult. Any potential storylines not yet unlocked by NPCs will be lost for good. It’s a balance the game manages to strike with confidence and mostly works. When trying to keep as many people alive as possible, combat, and by extension the game, becomes increasingly difficult. This also comes into play with how Jonathan levels up. Deterioration or improvement of districts only occurs whenever Jonathan sleeps, which he must do to level up. It’s another risk versus reward conceit that keeps Vampyr’s decision-making interesting. 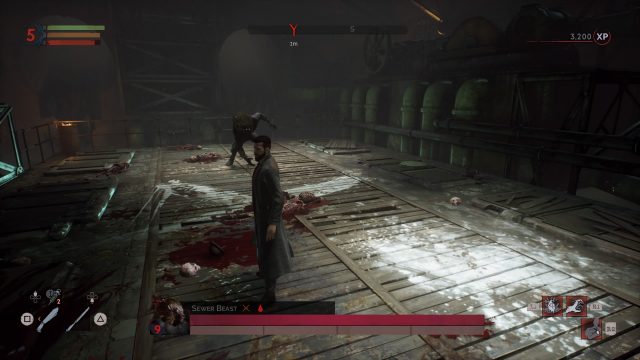 Despite looking like a werewolf, that’s actually a vampire.

If only that helped keep the game’s combat interesting. Vampyr features the now-standard health, mana (blood), and stamina system that dominates many action RPGs today, but does not manage to keep it fresh throughout the playtime. Due to a lack of experience, the game leaves little opportunity to diversify movesets, instead encouraging focus on several chosen few. This means most of what the game has to offer will be seen by the halfway point, leaving the second half lacking in new challenges. Weapons can be upgraded, each level generally offering one of two options to further improve the weapon. This allows for better specializations in builds but feels necessary to keep up with the game’s combat.

It’s when the game takes a break from slicing up vampires that it truly shines. Vampyr is an engrossing picture of a city on the brink of despair and its writing and atmosphere only reinforce that. Most of the NPCs do end up feeling a tad bit like slightly more fleshed out RPG townspeople, but at the very least they are well-written ones. The game spends so much time being a detective-style mystery that sometimes it felt like it should be one full-time. While not an open-world game by any stretch of the name, exploring Vampyr’s alleys and decrepit buildings gives plenty of small but intriguing details on the world and its characters. It is a game that manages to make the most of its location.

The same cannot be said of the game’s main story. What starts off in an exciting and mysterious manner again loses its way somewhere around the midpoint. Initially a slow introduction that eases the player into both London and its underworld of vampires that inhabit it abruptly gives way to long expository scenes of lore jargon that isn’t impossible to keep up with but has little payoff, emotional or otherwise. As the game escalates towards its inevitable, clichéd conclusion, some of the game’s bosses and setpieces become more memorable, but the moving parts around them all feel rushed and unearned. 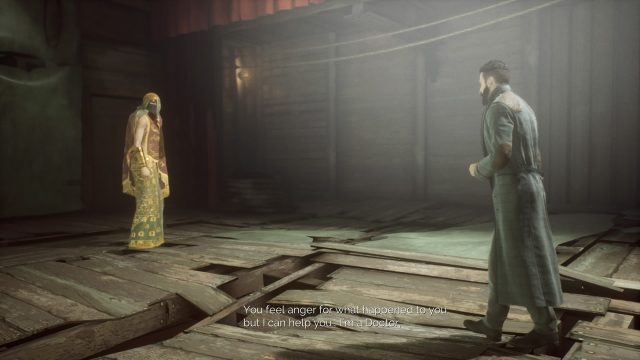 Jonathan Reid occasionally remembers that he is a doctor.

The flow of the game isn’t helped by some pretty egregious loading times and inconvenient checkpoints, leading to plenty of situations where players may find themselves fighting the same groups of enemies more than once. There was also occasional stuttering on the PlayStation 4, particularly during transitions between zones. On the other hand, Olivier Deriviere’s score is remarkable, mixing discordant tones and unnerving strings to carry the bleakness of the game’s subject material. The game isn’t the prettiest ever made but solid art direction helps to cover up its budgetary limitations.

Vampyr is a game I wanted to like a lot and the game is split between what works and what doesn’t. Combat could use an overhaul, as smoothing out the action would help in the moment-to-moment gameplay. Offering more combat options or spacing the game out better could make the game progress at a more consistent rate and help to hold interest. The game’s story feels like it was rushed to meet a deadline even as its characters are exceptional and the gameplay systems that support the cast are the strongest points of the game. For those looking for a unique, dread-filled experience in the RPG realm, Vampyr offers a type of game seldom seen. But much like the streets of 1918 London, expect a few bumps along the way.