A Place High-Schoolers Dare to Go

Although effectively considered a new IP, Tokyo Xanadu clearly takes heavy inspirations from other Nihon Falcom titles. The actual name comes from the Xanadu series, one of Falcom’s earliest creations predating The Legend of Heroes, while the game itself very clearly draws inspiration from Trails of Cold Steel and recent Ys titles. While not the most original game out there, Tokyo Xanadu nonetheless utilises its inspirations very effectively to provide a thoroughly engaging and entertaining experience.

Tokyo Xanadu is set in Moriyima City, fictional suburb of a Tokyo that suffered a devastating earthquake ten years prior. Main protagonist Kou Tokisaka is one of those who was caught up in said earthquake, but is now a high school student who spends almost all of his free time doing various part-time jobs. While returning from one of these jobs, he runs across classmate Asuka Hiiragi being accosted by some undesirable locals. Looking to intervene, he is instead surprised by the appearance of a gate that sucks them both into another world. Far from requiring assistance, it turns out that Asuka is more than prepared for the encounter, and Kou is introduced to the mysterious dimension of the Eclipse and its assortment of labyrinths.

The game is split into chapters with its structure lifted directly from Trails of Cold Steel. The date skips forward appropriately as story progression occurs. Once a chapter Kou will get some free time before his next part-time job, during which he can undertake sidequests or apply affinity shards to spend time and grow his relationship with party members or other key acquaintances. Xiphones and NiAR (a social media program) take on the role of Cold Steel ARCUS devices, complete with an Orbment system to enhance attributes by equipping gems, and and work as glossaries, quest logs, etc. Kou also has three attributes that are grown by doing dungeons and giving certain responses during quests and story scenes. These are supposedly used to determine true ending eligibility, though most should be able to quite easily reach the requirement though standard play. 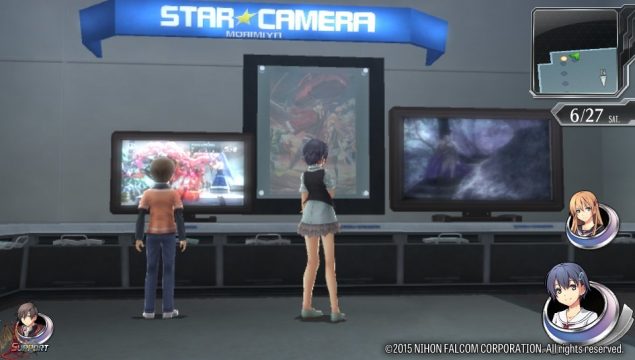 Some fine games are on sale in Moriyima.

Nihon Falcom has a deserved reputation to bringing masses of charm to its stories and it lives up to that reputation again here. Things are helped with a great cast that receives plenty of character development. This doesn’t just apply to the main characters; it’s a pleasure seeing loads of the regular residents of Moriyima receive their own mini-storylines as the game progresses — many involved in the optional sidequests and providing updates to NiAR when talked to at various points — and it really helps bring the city to life. Talking to the NPCs whenever possible is actively encouraged as they will always adjust what they say, and some will offer hidden extra quests. These sidequests can be quite variable in quality; some are humorous or heartwarming, while others can be banal.

The story itself sees plenty of twists and turns as players learn more about the Eclipse, though many questions about its exact nature are left unanswered (perhaps for a future entry), along with the structure of various organisations and their midden memberships that know of its existence. The chapter-based structure works well, letting particular incidents become their own stories but still being intertwined in a wider narrative. One complaint that can be made is that things can drag occasionally, particularly in the game’s final chapter, but on the whole Tokyo Xanadu provides a very enjoyable story that makes great use of its excellent cast. Aksys Games’ localisation on the whole does a good job, though its somewhat rushed nature is revealed by some typographical and grammatical errors slipping through. Fortunately, these aren’t enough to detract from the overall experience, but they are noticeable.

Daily life in Moriyima is only half of the game though, with the half other seeing Kou and his allies going through various labyrinths in the Eclipse. These labyrinths are usually pretty short, self-contained dungeons filled with various enemies. There are some basic puzzles and route splits to explore, but these usually just amount to finding the obvious switch to unlock the correct path, even if treasure chests provide a welcome incentive to explore every nook and cranny. A number of labyrinths will also feature environmental hazards, such as slippery ice. The relative shortness of the labyrinths works well to alleviate potential boredom — along with a combat system that encourages frequent character swaps — and there are appreciable differences in their designs and colour palettes, though it leads to some of the dungeons being a lot less interesting to explore in comparison to the standout ones.

Players control a party of up to three members, only one of whom is active at a time. The active member can be changed freely with a simple button press, and the game greatly encourages this by giving each character an elemental affinity and each enemy — minus some bosses — an elemental weakness. Controls are straightforward, with each character getting a basic attack, an energy-using ranged attack, an energy-using power attack, and an aerial charge, in addition to standard jump and dodge buttons. Two separate charge meters provide access to a burst mode and a special attack, complete with fancy animation. While it isn’t the deepest and doesn’t quite flow as smoothly as Falcom’s more revered action RPG series, Tokyo Xanadu‘s combat is easy to learn and works well. 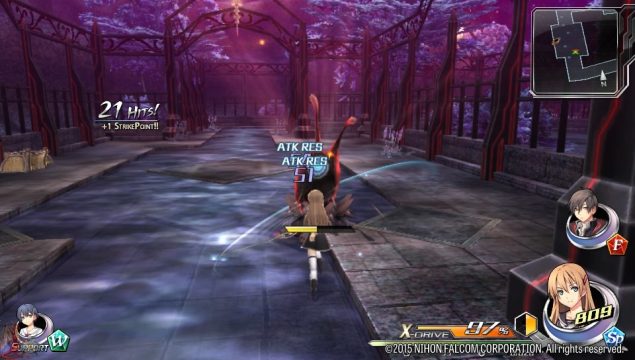 Creatures in the Eclipse took a rather different evolutionary path.

Although combat basics are simple, Nihon Falcom has created an appreciable amount of depth purely through how the various characters control. In addition to their elemental strength — which players can alter after a certain point in the game — each character varies in their strengths, some focusing on quick melee strikes, some on more powerful but much slower blows, while others’ fortes lie in their ranged abilities. This applies to enemies as well, who may be strong against ranged attacks, so it encourages players to keep switching their controlled character depending on the situation.

Most of the story labyrinths end with a boss fight against on the Eclipse’s more powerful denizens, and are variable in the challenge they give to players. Some will be fairly trivial to just ground and pound, while others will make players pay attention to their attack patterns. Even so, on the normal difficulty they never prove too hard to take down, especially if the player keeps a special attack or two at the ready to unleash when they come to the boss. The way the game encourages players to keep switching characters, and to select different members by explaining in advance which elements will be useful for each dungeon, is really what makes the battle system work; keeping things fresh as they mix up how players approach each enemy.

Nihon Falcom’s JDK Sound Team showcases its talents with another excellent soundtrack, which is superbly utilised throughout the game. Pleasant upbeat themes make wandering around Moriyima a delight, but make way where needed for great emotional tracks, and exciting battle and dungeon themes. It’s understandable that Aksys Games deemed the cost of English voice acting prohibitive, but the Japanese voicing is strong albeit far from omnipresent. With just a couple of minor cutscene exceptions, the game runs without any technical issues throughout, making good use of the same engine used in Cold Steel. Moriyima City looks nice and the variation between Eclipse dungeons works well, though there will be rare occasions players have to fight the camera and lock-on.

Its combination of inspirations means Tokyo Xanadu may sit in an odd place for RPGamers. The deliberate pacing of the story more in line with The Legend of Heroes focus may frustrate those who want a pure action RPG. However, coming from the other direction, I very much appreciated how the game divided its time between the great charm that one expects from Nihon Falcom’s narrative and quick but highly enjoyable dungeon experiences. The game is another excellent showcase of the PlayStation Vita, and the latest strong offering from a developer whose reputation is deservedly at its peak. 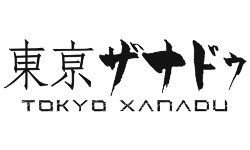