In an unexpected but delightful crossover, the themes of conflict and legendary heroes of Fire Emblem have been wrapped into a Shin Megami Tensei dungeon crawler and sprinkled with the fast-moving world of Japanese idols.  Yet, somehow, this mix of unalike elements comes together in a surprisingly enjoyable package.  For those that missed its initial release on the Wii U, Tokyo Mirage Sessions ♯FE Encore has arrived on the Nintendo Switch with additional content.  While the title won’t appeal to fans of solely Fire Emblem games, those who enjoy SMT dungeon crawlers will find plenty of the delving endemic to the series, with a much lighter story than it is normally known for.

TMS takes place in a modern-day setting where the idol industry is filled with hopefuls doing singing, dancing, and acting.  One particular talent agency holds an unusual secret: all of its idols are also Mirage Masters, who are able to duck into an alternate universe pressing against the normal one, where monsters roam and the essence of performers known as Performa, as opposed to Persona, is stockpiled.  The game’s story is typical JRPG fare of teenagers saving the world, but it’s also very irreverent, treating whether a party member will make it to a casting call on time as just as weighty a task as ensuring the walls between universes don’t fall to catastrophic ruin.  Fire Emblem characters, known as Mirages in the fictional world, hailing from a variety of past games bond together with new characters, while retaining their personalities for better or worse from their respective games: Chrom remains an understated heroic type, while Tharja is delightfully creepy; Navarre is still an aloof mercenary preferring to work alone, while Virion has an eye for the ladies.  Overall, the plot remains consistently thin but it’s well put together, with side stories that deepen each character’s individual motivations.  Similar to numerous Fire Emblem and Persona games, the real villain is revealed at a late point in the plot almost out of nowhere, leaving some minor plot holes, though by that point the game is so close to the end it’s questionable whether these oversights matter.  TMS does a surprisingly good job of balancing the teen drama and flippancy of the idol storylines with the more serious “save the world” bits, but anyone who predominantly plays titles for a deep plot should steer clear. 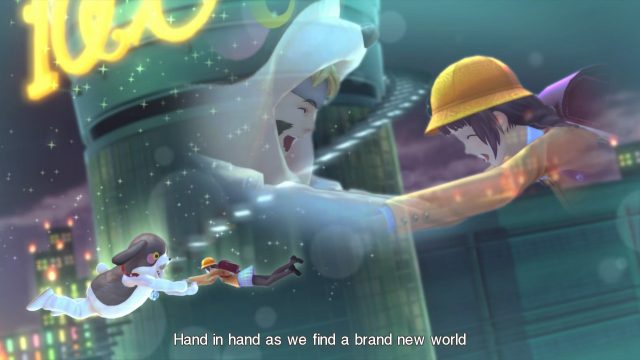 Completing side stories not only unlocks new attacks, but special music videos as well.

Weapons teach three types of skills: Command skills which are the bulk of the attacks each character uses, Session skills, and Passives which bestow a variety of character buffs.  With a limited number of spots for each, players will need to choose how to specialize their characters; for example, Tsubasa will inherit wind and spear attacks as well as a variety of healing abilities, but with a finite number of slots, the player will need to choose which to prioritize.  There’s no strictly bad choices, but strategic builds will be required for those playing on higher difficulties.  Like a Fire Emblem game, each ally and enemy is weak to specific weapons — swords typically trump axes, which are strong to lances, which in turn do extra damage against swords. Similarly, the elemental weaknesses found in the SMT series are again used, with enemies weak to wind (zan) typically resisting lightning (zio), and those strong to fire (agi) being weak to ice (bufu).

Taking advantage of an enemy’s weakness is extremely important, as hitting a weak point creates a combo chain of attacks known as Sessions.  As the game progresses, Sessions can be significantly lengthened with an assortment of Session skills that are obtained over the course of the game, as well as with duo attacks, which provide strong damage, healing, or both while extending the Session length.  Sessions allow for numerous extra attacks at no cost to the party, as well as awarding additional dropped items.  Each enemy can drop a star prestige, a force, and a third material based on enemy type — so a solider in the second dungeon will drop a two-star prestige, a knight’s force, and a piece of metal plating.  Players can use these materials to forge new weapons, known as Carnages, by combining them together. Star prestige are also used to unlock Radiant skills in each character, which provide permanent boosts ranging from stat increases to reduced elemental damage. 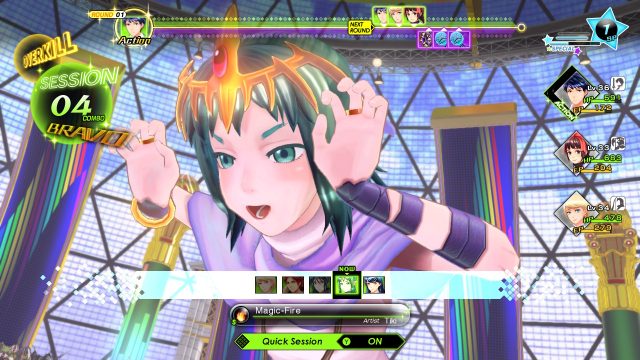 Equipped with skills, weapons, and mirages, the party must dive into a number of themed dungeons, overcoming a variety of puzzles and enemies along the way.  These dungeons have their own designs based on the boss the idols are currently chasing, but each revolves around the same basic theme of solving small puzzles that prevent the party from moving forward until they’re resolved.  There’s a fairly small number of dungeons in the game total, with side stories and requests taking players back into the same dungeon repeatedly.  It’s a little formulaic, but the player will need to occasionally revisit these dungeons to farm materials needed for Carnages anyway. The game does an excellent job breaking up the monotony by adding new twists or different objectives. The difficulty can be changed anytime outside of combat and special rare enemies, known as Savages, roam all dungeons and scale directly to the average party level, which make even low-level dungeons challenging to revisit.

While all of these combat and quest systems may seem like a lot of things to juggle, TMS does an excellent job pacing when each is acquired — just as the player may tire of constantly creating new Carnage weapons, the ability to upgrade existing ones unlock; as the main plot dungeons starts to feel a little draggy, new side stories unlock to break up the grind.  The newly introduced EX story content, while fairly short, does a great job of further elaborating on the relationship of two key characters, and former DLC being part of the base game is always welcome.  Requests also allow players to take a brief and generally enjoyable break from the normal flow of gameplay, though some can be a little frustrating for minimal rewards and skipping them won’t cost the player. 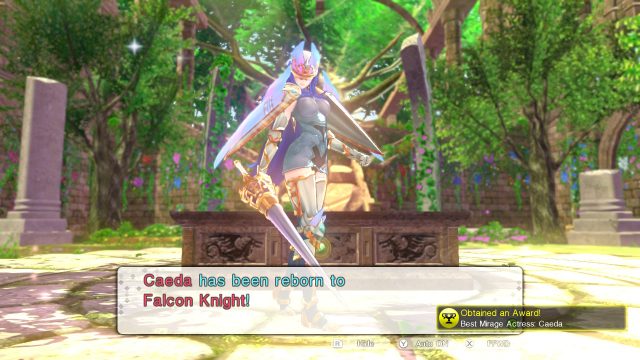 Just like in Fire Emblem, Mirages can change classes to unlock better stats and more weapons.

Unsurprisingly, a game surrounding an industry where dancing and singing go hand in hand has amazing music. Each up-and-coming idol at Fortuna takes time away from the less important task of saving the world to ensure their careers continue to grow and rewards players with short but beautiful cinematics along with new songs.  Even the music outside of these special events is really good; it’s nice to have a dungeon crawler where the dungeon music doesn’t get annoying after a time.  Graphics have seen an upgrade from their original Wii U days and look great in both handheld and TV modes.  Functions that were previously relegated to the Wii U gamepad, such as the Topic messaging system, have been flawlessly integrated into the main screen.  The move from Wii U to the Switch was a positive one, and hopefully the start of a trend for RPGs of that era moving forward.

For anyone who played the initial release on the Wii U, there’s not a ton to revisit, though the combat remains immensely satisfying and the story continues to hold up and is further beefed up by new content. While the game won’t appeal to those seeking the tactical gameplay of a classic Fire Emblem, anyone who didn’t jump onto the idol train last generation could do far worse than picking up this Encore, especially with a dearth of other games in a similar vein on the Nintendo Switch.