If you are interested in The Legend of Heroes: Trails of Cold Steel II, it’s recommended that you’ve either played the first game or are fine with knowing a little of what went on in it before reading any more of this review. This is a direct sequel in every aspect, so be warned that there could be some spoilers for the first game below. If you just need a refresher, you can also read our official review of the first Cold Steel.

Cold Steel II picks up shortly after the end of the previous game with Rean briefly on his own near his hometown of Ymir. After a distressing reunion with family and friends, he heads off to reunite with his Class VII classmates, a task which takes up most of the first half of the game. In the time Rean’s been away, the rest of Class VII scattered across the country, hiding from the conflict that was sparked during the last game’s final chapter. There is a lot of revisiting old locations during this process, and while it’s fun to see how things have changed, the dearth of new places to visit is somewhat disappointing since we hear so much about the other areas of Erebonia.

Much like some of the other games in the Trails series, the best story content is backloaded into the latter half, but that doesn’t stop it from offering some wonderful character development throughout. The cast is fantastic, and there are some great interactions between characters from start to finish. Lots of familiar faces will show up when least expected, but are never unwelcome when they do. The whole story is very personal with a strong focus on Class VII, its students, and its supporters. Since its members are no longer tied down to the school structure, there’s more diversity in how the interactions take place. Cold Steel II seems to benefit greatly from this freedom while still maintaining the personality it had back at Thors Military Academy. 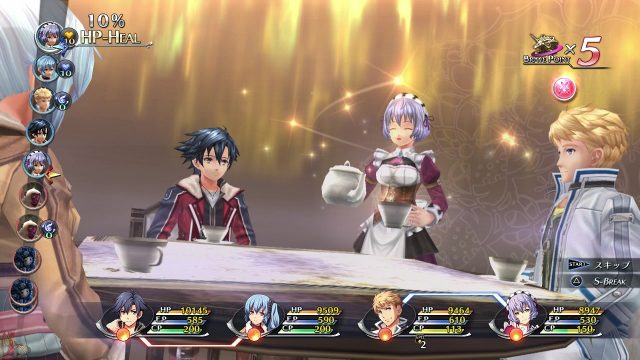 There are some great guest characters.

It’s impossible to talk about the greatest story points of Cold Steel II without spoiling things, but know that there are plenty. This title revels less in the shocking moments (though there are still plenty of those) and focuses more on making those moments of impact more personal. Along with these character-focused parts, it also continues to spin the web of intrigue that has been going since Trails in the Sky and shows no sign of stopping anytime soon. The Trails world requires an investment to get into, but it is completely worth it to do so.

There is more than just story here, as Trails of Cold Steel II also offers one of the most impressive turn-based battle systems in recent days. The classic staples such as status effects, magical arts, and combat skills are all here, but there is also an important reliance on formation on the battlefield, unbalancing enemies by using the proper attack type, building up combat links, and choosing the correct time to interrupt an enemy’s turn order with a powerful S-Break attack. With all of the characters to choose from and the deep level of customization that can be tweaked for each of them, there’s a level of depth here that’s impressive.

Along with the standard party combat, there are also mech battles throughout. These are simpler in concept and do not appear as frequently, but help add to the battle variety. Eventually mech fighting is even mixed with standard combat to add yet another bit of depth. Whether on foot or in a robot, combat is fast and well paced with story content so as to not wear out its welcome. Only content in the game’s epilogue seems to try a player’s patience, but even that offers a neat little twist to make it unique. 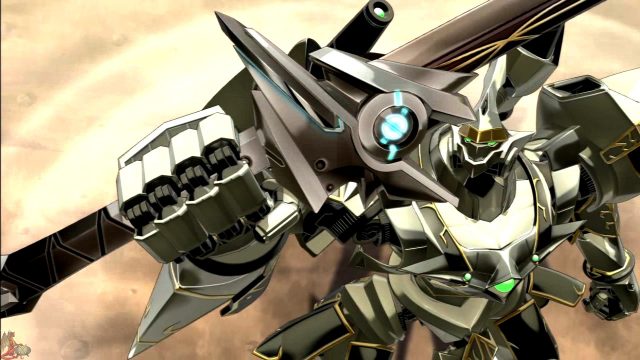 Also, there are a lot of giant robots.

Something that is often overlooked in gaming is how player-friendly a game is, and Cold Steel II is very handy in that aspect. Customization options are easily accessible and available frequently throughout the game, even in dungeons or on field maps. Healing spots are available at just the right spots to mitigate frustration and enemies are generally easy to avoid on screen if desired. One thing that could be improved is fast travel, as even though the game offers it there are often so many areas to move between that it could be structured better.

In the area of presentation, Cold Steel II is very solid. Though there is a lot of recycling in the soundtrack, there’s plenty of new content and the old pieces are still perfectly fitting when heard. Voice acting is also great, especially for a lot of the new antagonists introduced in the sequel. Visuals are lovely and work quite well throughout, though there are some moments when there’s so much taking place on screen that the Vita slows down dramatically. It never hinders anything, but is very noticeable when it happens.

All things considered, The Legend of Heroes: Trails of Cold Steel II hits all the right notes. Combat is outstanding, proving that turn-based battles are still alive and well when done skillfully. The story is great, even if it does take a while to get started up again. While less of a world-spanning epic, the personal focus on Rean and his friends is powerful and makes the tale a memorable one. Despite having received three Trails games now in under a year’s time, the wait for more is going to be painful. The web these games weave is mesmerizing, so the thirst for more is real. For now, this massive pair of games is more than enough to keep you busy for a while.