The Legend of Heroes: Trails of Cold Steel PS3 Review

Taking place in the same world as Trails in the Sky, roughly two years after the events of Second Chapter, Trails of Cold Steel moves the story from the small kingdom of Liberl to the mighty empire of Erebonia. It places players in the shoes of Rean Schwarzer, a new student at the prestigious Thors Military Academy who finds himself selected as an inaugural member the newly established Class VII, an unusual class in which commoners and nobles learn together through a unique curriculum.

Much like Trails in the Sky, Cold Steel‘s overarching story is light-hearted and driven by Class VII’s unique personalities and their developing friendships. School life is a huge part of the game, borrowing a number of ideas from the Persona franchise, but at the same time the game is dedicated to establishing a complex and tumultuous nation teetering on the edge of major conflicts. The game takes you across the world, shows you the various pieces as they move into place, and as the tale nears its end, everything comes together into an epic finale that sets the stage for a much larger, more grandiose tale in Cold Steel II, set to release later this year.

For fans of the franchise, it should come as no surprise that Cold Steel is a rather verbose game. The towns are filled with NPCs, and while the main plot helps build the politics of the nation, it’s these NPCs that really establish it as a living, breathing world. Borrowing another page from Persona, the narrative is structured over the course of several months, with days, weeks, and months passing between each major event, marked by calendar dates. As time goes on, the characters that make up the citizenry of Erebonia go about their daily lives, and have their own little stories that players can follow over the course of the game. Whether it’s Becky and Hugo’s ongoing rivalry, Alan and Bridget’s will they/won’t they romance, or Kay’s adorable boyhood crush on Rosine, it’s easy to fall in love even with characters that don’t play a major role in the story, and that is a testament to the amazing world Cold Steel has created. 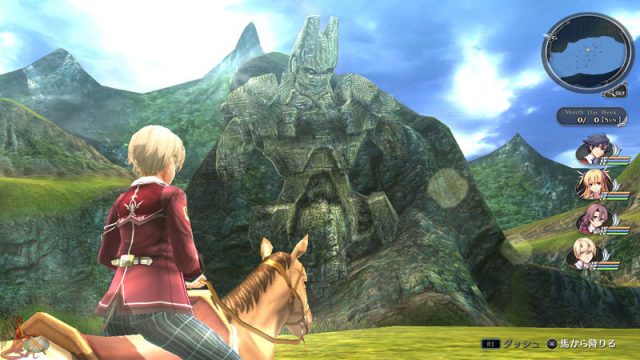 Exploring the Nord highlands is one of the game’s many highlights.

As a general rule, the gameplay is structured into three separate phases. The first phase is the free day, in which Rean is able to wander around Thors Military Academy and the town of Trista, performing various tasks for the citizenry and student body, and spending time with his friends. It’s during these days that the game most resembles the Persona franchise: Rean is given a certain number of bonding points to spend, each of which can be used to spend time with a character. Spending time with a character improves their link level, which comes into play in the combat system.

After the free day, Class VII is given a practical exam, in which select characters must team up for a practice battle and fulfill certain conditions during the encounter. After that, Class VII is split up and sent all over Erebonia for a field study. This is the main portion of the game, and the segments that most resemble more traditional RPGs. While on a field study, players are tasked with a number of jobs to complete, and in the process learn something about the political machinations of the territory. Every area is unique, making for a wonderful variety of locales that never gets boring. Even more interesting is the fact that while Rean ends up in one location, half of the class ends up in another, and their actions are a complete mystery, showing that the nation of Erebonia is much larger than what players visit firsthand.

Combat in Trails of Cold Steel is very similar to its predecessors in the Trails in the Sky series. The core mechanics are virtually the same: each character has a set of crafts and arts that they can make use of in battle. Crafts are unique to each character, and cost CP to use, which is gained whenever a character deals or takes damage. Once a character has between 100 and 200 CP, they can unleash a devastating S-Craft, which is essentially that character’s signature move. Arts, on the other hand, are learned by equipping characters with quartz, and these are more like traditional spells. They cost EP to use, which each character has a limited supply of, and unlike crafts and regular attacks, they take time to cast, delaying that character’s turn briefly before the attack is launched. Arts are capable of taking advantage of enemy weaknesses, which balances the drawback of the delay. Characters can also form links, which grant them special partner abilities based on their link level. Link levels are increased by partnering up in battle, but also by spending time with characters during free days.

Customization comes in the form of traditional equipment, but also from each character’s orbment, a special device that allows them to equip quartz and learn arts. While prior two entries in the Trails in the Sky series allowed characters to equip six and seven quartz respectively, Trails of Cold Steel ups the ante by allowing for nine, though how they function has changed quite a bit. Each character’s orbment can hold eight regular quartz, each of which can give that character access to one or more art, increase one or more stats, and in some cases do both. They can also equip a single master quartz, which is a much more powerful quartz that can actually gain experience and improve over time. As a master quartz improves, it grants access to new arts as well as providing large stat bonuses and powerful passive abilities that can grant a character significant advantages in battle. While each character starts with their own unique master quartz, new ones can be found throughout the game. 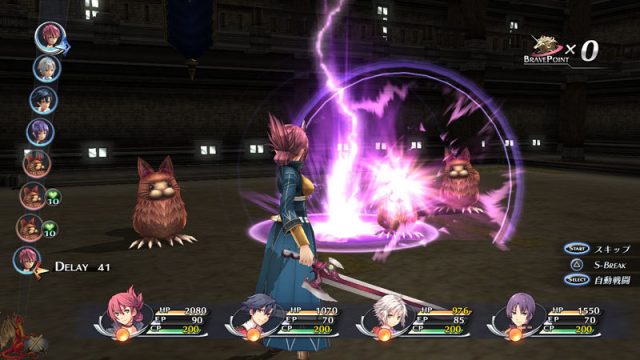 Trails of Cold Steel‘s visual design is interesting because despite being technically primitive, it nonetheless creates a cohesive, and in many ways beautiful, artistic style. The character designs are all excellent, and certain segments of the game really show off what even a simplistic graphics engine can do. The highlands of Nord in particular stand out as a breathtaking visual experience. A lot of this quality is highlighted by the wonderful soundtrack. There’s a varied selection of musical styles throughout, ensuring there’s rarely a dearth of new tracks to enjoy.

It’s worth mentioning that voicework is one place where the game flounders, not because the voices are bad — they’re actually very good — but because they’re inconsistently applied. This is best shown by the sudden and bizarre shift between the game’s prologue and first chapter. While the prologue is fully voiced from the beginning, once chapter one begins, the voicework becomes much spottier. Even stranger, this spottiness can occur in a single scene. One character will be voiced while another, usually Rean, will not, and this disparity is immediately distracting. Players will get used to it as the game goes on, but the effect is undeniably jarring.

The Legend of Heroes: Trails of Cold Steel was an unexpected but highly welcome surprise. Coming off of Trails in the Sky SC, I was expecting another solid, enjoyable RPG experience, but what I got was far beyond anything I could have anticipated. The game is huge, with my own playthrough clocking in at over ninety hours, and by the end I was itching for more. I can say without hesitation that Trails of Cold Steel is my favorite RPG of 2015, and fans of the genre definitely shouldn’t pass this one up.