The Cruel King and the Great Hero Review

At first glance and after the first few hours, there’s not much to say about Nippon Ichi’s The Cruel King and the Great Hero. Its premise is a simple fairy tale with gameplay following suit. However, that’s also the charm of this heroic tale. After all, it is in the style of a children’s book, and this is nicely represented throughout the entire fifteen hours of the story. That also bleeds through into gameplay and battle system, which can lead to some boring and tedious moments, but it’s all worth it once this living storybook reaches its final chapter.

Yuu is a young girl who dreams of becoming a great hero just like her Papa, who is known for taking down the great Demon King. By her side is a fearsome Dragon King, who Yuu now refers to as her Dad, that helps guide and train Yuu to fulfill her dream. Every night, the Dragon King tells tales of Yuu’s Papa that also slowly reveal the Dragon King’s past. Soon enough, Yuu will adventure out and tell tales of her own as she works to help the monsters at Monster Village, solving conflicts between monsters and humans and facing the past of her Papa, the Great Hero. Watching that tale unfold is satisfying and heartwarming as she faces difficult challenges to becoming a hero.

Although its story is elementary, like most storybooks, the execution is nearly perfect in that aspect, and its themes give the story a great deal of depth. All events are told through narration, almost like a teacher or parent reading to a child, with illustrations turned like pages in a book. Those little touches make all the difference in The Cruel King and The Great Hero. The art style is very reminiscent of storybooks with its 2D side scrolling areas showing great detail and having plenty of moving parts to bring it to life. It all comes together for a charming and beautiful setting. 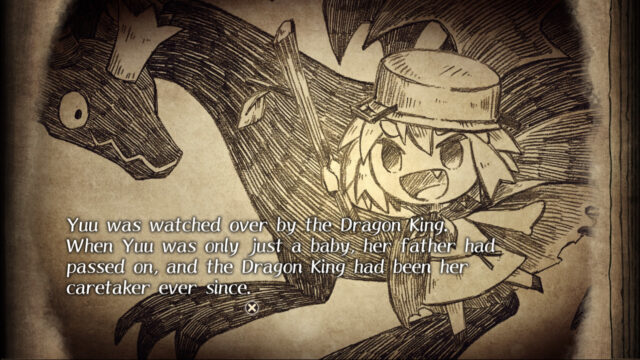 Story is told through illustrations and narration like a storybook

The simple narrative of the game makes its way into the battle system, and there’s not really much going on with this turn-based combat. Players have a choice each turn to either use a standard attack, special attack, item, guard, or escape. Each character has stamina point that act as health, and energy points that are consumed when using special attacks. Stamina only refills by resting at spirit fountains or by using fruits that recover health, and one energy point is replenished each turn. Yuu often has one companion by her side, with three appearing over the course of the game, and it’s nice to be able to choose which one accompanies Yuu in the final area.

The standard turn-based battle system lacks much thought or strategy, especially for the first half of the game. There are only a handful of bosses that warrant guarding in anticipation of a big move or changing loadout. Players can almost mindlessly select attack and special attacks to get through 90% of the game. Only in the final area the player needs to plan out battles, as there are some enemy groups that can wipe the party. The battle system opens up a bit with some strong special attacks that work in different circumstances, but again, that happens very late in the game. As for equipment, there are some weapons and equippable items that the player can go out of their way for that can boost a character’s stats, but progressing through the story will give player all they need to complete the game.

Straightforward battles are not frustrating, just a bit boring at times, but the random encounter rate is. Going through an area the first time can be a painstakingly slow affair. Yuu walks slowly in areas where she is weaker than the enemies she encounters. The slow walking is then met with a fairly high encounter rate that will constantly halt players. Thankfully, the player can escape battles and there is no penalty for an unsuccessful escape, but players will just want to quickly escape to continue to progress far too often. With the level scaling being generally favorable for the player, it’s most of the time not worth battling to level up. Just battling every so often and completing a few side quests is enough experience to be able to beat the game. 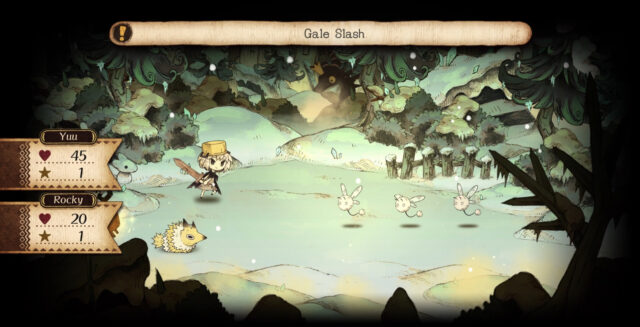 Yuu and companion in battle

Some of the side quests provide welcome worldbuilding and depth that which make them worth doing. One notable NPC storyline starts out as a simple fetch for food before turning into an enjoyable adventure to help the NPC’s tragic circumstance. However, some of the side quests can be too detailed with lengthy dialogue and almost all of them require backtracking to fetch items. It helps that there are spirit fountains in each area that provide fast travel to get to different areas quickly and an endlessly usable item that takes Yuu back to the main area Monster Village hub. Also, once an area is completed, Yuu will be able to run instead of walk through it’s 2D sections, which helps things move along faster.

Luckily, the tedious parts of the journey are filled with some delightful sounds. The level of detail in the visual and sound design fills the game with a bunch of personality. All of the themes were excellent with their whimsical flair matching the storybook aesthetic. The battle theme is a particular is a standout and remains catchy and a joy to listen to throughout the entire playthrough. There aren’t many tracks, but most of them are good enough that the repetition of them isn’t a bother. Weapons and attacks sound satisfying, while menus and text boxes feature a crisp page turning sound effect. Menus and text boxes have a page turning sound effect that is crisp. It all combines to make a pleasing visual and audio experience. The story is told through Japanese and English text options, but is feels like the story sequence could’ve benefitted from an English audio option. There are no issues with the Japanese audio, but the story for English-speaking players would have greatly benefitted from hearing the story told in English.

The Cruel King and The Great Hero is a heartwarming story that surprisingly has some depth to it. The visual and sound design brings the world to life with its attention to detail that remains pleasing through the entire fifteen-hour playtime. The depth and detail however doesn’t make its way into the battle system and gameplay. The encounter rate and slow pace can be frustrating while battles don’t require much thought until the end. However, the short playtime means it doesn’t take long to get there and ultimately the positives win out. Simply put, The Cruel King and The Great Hero is a charming tale and world that is worth visiting.