The Caligula Effect 2 easily goes down as one of this year’s most pleasant RPG surprises. For a sequel to a game that was not well received in both its original and enhanced remake iterations, FuRyu and Historia have done fine work in creating a title that manages to carry its interesting premise and ideas to fruition. While it never threatens true greatness, the game remains engaging throughout its forty-hour runtime, aided by a good localisation from NIS America, and successfully avoids the potential pitfalls.

Though The Caligula Effect 2 is a sequel to the previous game, players can readily jump straight in here. Some story threads carry over — especially with respect to some specific characters — but all of the important details are provided naturally over the course of the game. The Caligula Effect 2 is set five years after the first game, in which a virtual idol called μ trapped a number of people in a virtual world called Mobius, where they lived out idealised high-school lives until a group known as the Go-Home Club broke free of its control. Now, that appears to be happening again, as a new virtual idol called Regret has a new generation of people trapped within her world of Redo. 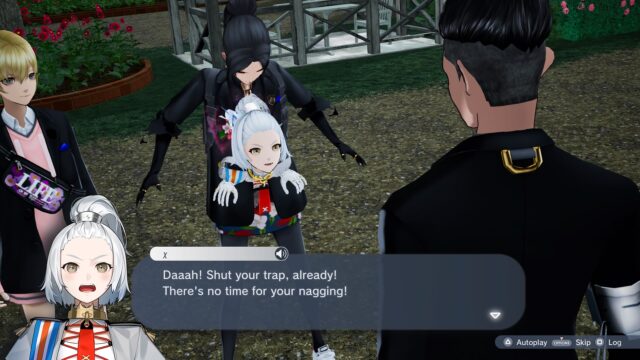 Being a virtual idol in a virtual world allows for some shenanigans.

The game begins with the protagonist coming to realise the situation thanks to their interaction with μ’s “daughter”, χ, who has been taught the error of her mother’s past ways and is looking to ensure those mistakes are not repeated. The protagonist manages to find other people who are also able to regain their memories and awaken special combat powers, establishing a new iteration of the Go-Home Club. Standing in their way are the Ostinato Musicians, composers who want to stay in the comfort of Redo and are able to use their music to rile up and control the regular people.

It’s pleasing to report that this interesting premise is handled effectively in The Caligula Effect 2. The pacing is strong and it’s helped by an interesting cast of characters. Players can choose a male or female player character, and though this doesn’t have any impact on events, it’s naturally referenced by the flavour text throughout. The premise makes for an interesting examination of the cast; as the people of Redo are given their idealised appearance, it allows what appears to be a group of high school students to turn out to be far from it. Players are given plenty of opportunities to learn about the cast’s pasts, traumas, and regrets; help them overcome them; and get ready for their return to the real world, with some Persona-esque vibes as players go through the individual character stories. Without providing detail to avoid spoilers, the game also includes some inclusivity that’s pleasing to see, while many of the Obstinato Musicians are much more than just straight antagonists, there simply to be defeated.

The Caligula Effect 2 uses a timeline-based command combat system. Battle begins whenever players run into hostile characters as they venture through the locations of Redo’s virtual city. The game pauses when players can issue a command to a party member, with up to four in combat at once. Potential commands include attacking, using a support skill, emergency guarding, and using an item. Each action takes up a certain amount of time, including an initial charge-up period. Players can preview the choices and, if needs be, delay or select a different course of action before confirming; correct action selection and timing is vital to counter or defend against enemy moves as well as to unleash combos. 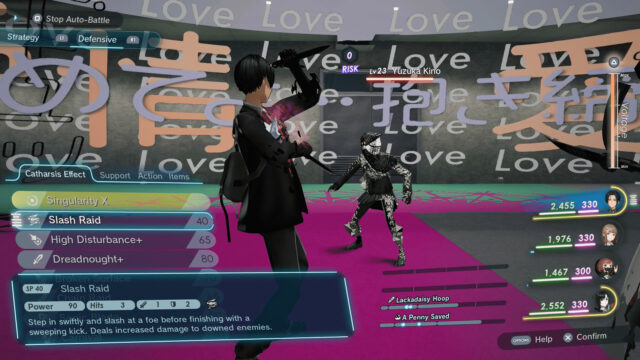 Combat doesn’t take too long to get to grips with and moves along decently.

Players can let the AI take over all of the non-player character party members in combat, which is helpful at speeding battles along against most of the rank-and-file enemies that don’t require special tactics, but in turn becomes cannon fodder against the more powerful bosses. The combat isn’t as complicated as it lets on at first and it has enough about it to stay engaging, and the balancing allows the game to avoid getting bogged in them; the animations move quickly. However, it never really evolves outside of its initial learning curve and once players come to understand the counter system and how to defend against enemy attacks, they can get by largely repeating the same tactics. Though boss fights require special focus on the normal difficulty, there isn’t a huge amount to differentiate the basic flow and the challenge largely comes from them having more power summoned help rather than anything special on their part. There are four difficulty options, and players can switch between them at any time.

“Dungeons” are primarily largely linear pathfinding exercises, while exploration is encouraged by a good amount of chests scattered around the many offshoots. The Caligula Effect 2 strikes a generally good balance with the size of these areas and the number of enemies found within. Character growth features a straightforward levelling system in combination with four equipment slots for stigmas collected throughout the game. Most of the stigmas include passive skills that can be mastered by battling with the stigma equipped. Equipped stigmas automatically have their passive skills active, with six slots available on each character to equip previously mastered passive skills. The system is enough to give players something to occasionally check up on without needing to give it full attention. 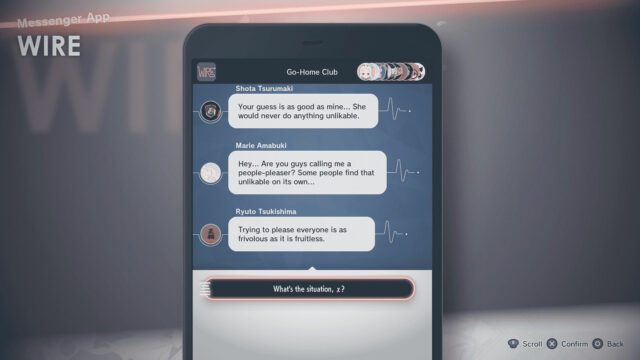 Virtual kids spending all of their time on their virtual phones.

Sidequests are divided into two groups. The first features character-driven quest chains where players solve issues surrounding particular groups around Redo, such as the part-timers in a fast-food joint and a gang of delinquents. These provide some engaging vignettes on top of the main story that add a bit of extra flavour to the game and world. However, they come with some annoying barriers, for they cannot be progressed until certain items are found. There is no indication about whether said items are something that can be found at that moment or after the story progresses. The remaining sidequests are generic propositions along the lines of item collecting or beating up a certain number of enemies offered by passing NPCs that grant welcome rewards if players happen to complete them while going about other business but are really not worth going out of one’s way to do. There are some neat touches, like character profiles that update and reach the point where players can compare and contrast their Redo and real-world selves.

The Caligula Effect 2 looks nice enough without being particularly impressive visually. There’s a superficial and vibrant sheen on everything, which is in keeping with the game’s themes but also means there’s not that much attachment to be gained towards the locales. The major character designs stand out well, event scenes are decently animated, and the environments all feel distinct enough that it’s easy to forgive those areas where the corridors do blend together. 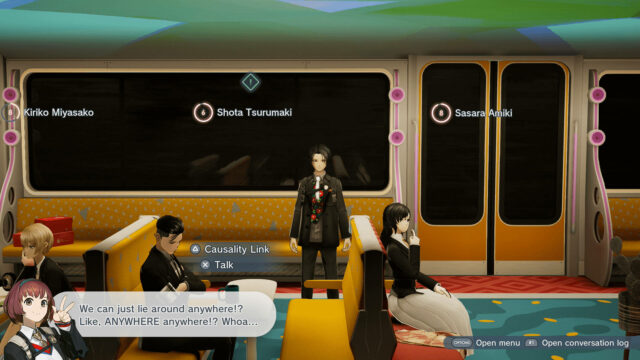 One advantage of having a train as a base.

Like its predecessor, The Caligula Effect 2′s soundtrack features upbeat music created by a variety of Vocaloid producers and composers. The result is a set of enjoyable and very catchy tracks that never get grating despite being on a loop. The decision to have the instrumental versions playing while are exploring and then adding the vocals when combat breaks out is effective. The Japanese voice acting is also strong throughout and makes the game a pleasing audible experience.

The biggest tell of how much of an improvement The Caligula Effect 2 is over its predecessor is how little of the game feels like a chore. Although it may lack those standout moments that top-drawer RPGs provide, it’s easy to find time whizzing by with catchy music and speedy combat and exploration. With characters and a story that keep things ticking along nicely, The Caligula Effect 2 makes for a satisfying use of one’s time.