Stygian: Reign of the Old Ones Review

An Abyss of Madness and Old-School Difficulty

Cthulhu has covered a lot of digital ground in recent memory, from tactical games to first-person mystery thrillers, and everything in-between. One area we haven’t seen represented as much as expected is the traditional, hardcore RPG that emulates a tabletop session rich with narrative, interlocking gameplay systems, and tons of player choice dependent on random number generation. This is where Cultic Games’ Stygian: Reign of the Old Ones comes in. While it isn’t a flawless experience and absolutely refuses to hold the player’s hand, it does manage to set itself apart by virtue of its unrelenting difficulty, all while telling a story that comes closer to Lovecraftian fiction than many of its contemporaries.

True to form, the game takes place in the 1920s city of Arkham, Massachusetts. A mysterious supernatural event known as the Black Day has caused Arkham to become cut off from the rest of the world, seemingly enshrouded by an endless void. Chaos and anarchy now control the streets: the mob is the new law, madness and violence run rampant, and a cult worshipping entities known as the Great Old Ones has taken up residence just across the Miskatonic River, making excursions into Arkham proper periodically to “recruit” new members. Taking on the role of one of Arkham’s unfortunate residents, currently eking out an existence living day-to-day in the attic of the Old Eel House tavern, players set out on a quest to find a being known only as the Dismal Man, who promises answers and, perhaps, a way out of the doomed town. 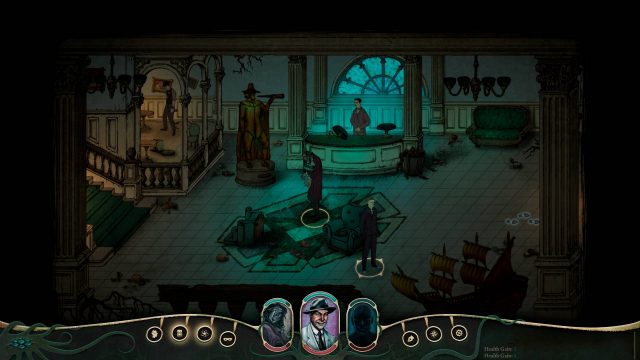 Indoors and outside, bleak and dreary pretty much sums up Arkham these days.

Stygian is not afraid to delve deep into its role-playing roots. Right from the beginning, players are given free rein to create the kind of character they want, choosing from some premade builds or making one from scratch. There are many archetypes appropriate to Lovecraftian horror to choose from, ranging from the academic to the criminal, from the investigator to the occultist. Players also get to choose a specific background for their character within the chosen archetype; the criminal, for instance, can have a background as a gangster, thief, hitman, or con artist. Further choices like gender, age, and belief system all play into stat point allocation and growth possibilities, and specific dialog choices and gameplay options that may be available over the course of the game.

Stygian feels like a throwback to hardcore strategy RPGs like Interplay’s Fallout and Wasteland, beyond just the same isometric perspective during world exploration. Players are thrown into a deep and detailed world, and getting acquainted with the various systems in play can be a daunting challenge. The main gameplay conceit revolves around managing both health and sanity, which is a challenge in and of itself, given the hostile nature of this lawless Arkham, and the propensity for just about everything to harm one’s sanity in true Lovecraftian fashion. Each time characters grow in level, two skill points can be used to increase certain character attributes and one new perk chosen from a list. Likewise, being exposed to enough violence and disturbing horrors builds up a separate Angst meter, forcing players to choose a permanent penalty each time it fills. The game makes it clear that it isn’t your friend, and that your stay in Arkham will be anything but hospitable. 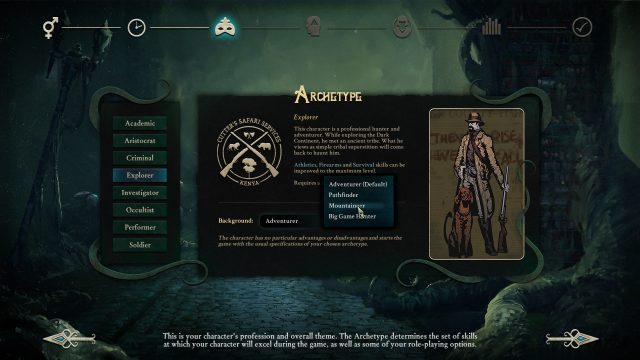 A pretty hefty character creator stuffed with everything you could want in a Lovecraft tale is sure to appeal to those who take their role-playing seriously.

There are plenty of quests to keep players busy, with the handful of main quests frequently splintering into smaller side quests. There aren’t any ancillary activities to get lost in — everything is done in service of the main narrative quest — but there’s plenty of depth inherent in managing the multitude of gameplay systems. For example, since managing one’s sanity meter is equally as important as staying on top of health — the game ends in a game over when sanity reaches zero — plenty of mind-altering drugs are available for maintaining a strong mind or bolstering a weak one on the edge of the precipice. However, some drugs, like cocaine and alcohol, have a high addiction rating, bringing with it negative withdrawal effects when the drug isn’t taken continuously.

Cigs — Arkham’s new de facto currency — are always difficult to come by, and are used for everything from renting out a place to sleep to paying a daily wage for hired muscle that’s been recruited along for the ride. Coming up with enough cigs to keep healing supplies stocked and spring for better offensive options becomes a stressful tightrope walk that persists until the game’s end. Even resting for the night must be carefully planned out, as each character can be assigned tasks to complete over the course of the night that might provide helpful insight into occult or scientific research (something there’s simply no time for during the day), recuperate lost health and sanity, or perhaps patrol the area to keep the group a bit safer from unwanted visitors.

Despite one’s best efforts, combat is unavoidable, even though the game makes a point of reminding the player at numerous opportunities that combat isn’t necessarily about winning but surviving, encouraging flight rather than fight. In fact, combat can be avoided a surprising number of times, sometimes through skillful dialog manipulation, other times by physically sneaking around enemies. This is a good thing, since the battle system is perhaps the game’s biggest hurdle. Combat takes place on a hex grid and is turn-based, with all player and enemy characters rerolling initiative every single round. There’s a lot of emphasis placed on back attacks and status ailments, the former being quite difficult to avoid on a hex grid, and the latter seemingly always working out in the enemies’ favor. 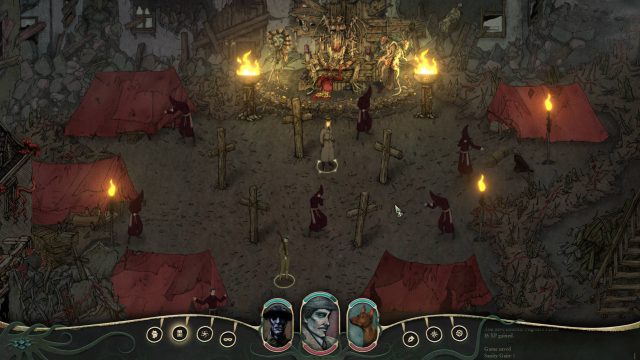 The cult that has spawned across the Miskatonic River will have to be dealt with sooner or later.

As sanity reaches critical lows and other ailments begin to stack up, it becomes common for characters to miss attacks, drop their weapons, act randomly, or simply freeze up and miss their turn that round. Characters can perform as many actions as they have action points for, which is also determined by initiative and status ailments, and can vary from round to round. Not only is the combat far from elegant, but it is very tough, and the odds feel stacked against the player at all times. Thankfully, the designers have implemented a feature to restart any combat encounter that is going south, and the game itself is constantly auto-saving whenever players enter a new area, so progress lost due to a poor battle result is usually kept to a minimum.

To offset the sometimes frustrating combat, it helps that the game’s narrative is quite engaging. The search for the Dismal Man splinters off into many separate tangents, each exploring a different facet of Lovecraftian fiction. While one quest chain may deal specifically with the madness of cult worshipping the Great Old Ones, another mission sees the main character enter the dreamlands while sleeping, and yet another puts them hot on the trail of a brutal killer haranguing Arkham’s citizens. A clever twist towards the end of the game really puts the whole game into perspective and will leave some pondering it well after it ends.

It isn’t just the choice of missions that satisfies, but also how the game’s written. A great effort went into emulating Lovecraft’s writing, going to great lengths to describe in detail the descent into madness. Written dialog, journal entries, and flavor text are plentiful, and all expertly convey the feeling of reading an authentic work by Lovecraft himself, with the language updated a bit for contemporary audiences. Conversations stand out, skillfully representing the different social classes and cultural backgrounds of an American town in the early twentieth century. Choice and creativity are encouraged; many quests feature multiple paths to completion, though this is as much a result of having character builds specialize in certain skills than it is creativity on the player’s part. Role-playing is encouraged, and acting in accordance with the traits chosen during character creation even awards bonus experience. 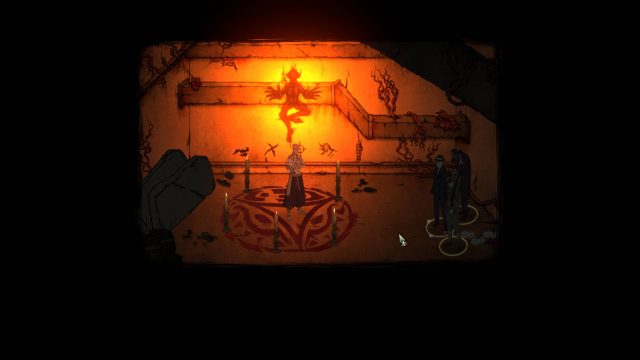 Since the Black Day, friendly faces in Arkham are few and far between, so it’s best to take help when it’s offered, no matter the source.

As satisfying as the narrative is during the game, it comes to a sudden and highly unsatisfying end just as it really should be ramping up toward its climax. It feels as if the final act is not fully developed, which has the unfortunate effect that the main quest is never resolved at all. While one could argue this was intentional subversion on the developer’s part, it doesn’t translate well into an interactive fiction medium, particularly one in which the narrative truly is the highlight that keeps one going. It’s not even a case of a bad ending earned through poor choices during gameplay; the game replaces its climax with a cop-out cinematic that doesn’t address any lingering questions, then the credits roll. There’s no other choice but to feel cheated in a major, inexcusable way.

Stygian is brimming with atmosphere, and it owes quite a bit of that to its style of presentation. Graphics are detailed, yet have a hand-drawn quality to them that is generally appealing. Arkham’s residents show a lot of visual variety, and character models feature lots of animation to help tell the story. For a game based on the Cthulhu mythos, enemy variety is a bit lacking, but since combat is often best avoided, the few that are present don’t overstay their welcome. Voice acting is absent, save for the occasional grunt or scream, but the audio is otherwise well done, with period-appropriate music in certain locations, threatening silence filled with unsettling noises in others.

Stygian: Reign of the Old Ones is a well-made and deep RPG that fans of classic post-apocalyptic western RPGs will enjoy. While its combat is too slow-moving and cumbersome to keep player interest, its narrative is worth the price of admission. The writers do an admirable job in creating a believable and bleak Arkham full of Lovecraftian horrors in which not all of the monsters are the eldritch ones. But given that the game’s story stands out as its most promising aspect, the abrupt and unsatisfying ending becomes almost impossible to forgive. If a steep difficulty curve, the promise of learning and juggling deep gameplay systems, and keeping a close eye trained on stats at all times sound right up your alley, or if you just want to be immersed in a well-made, atmospheric world, then Stygian is well worth checking out.