A Stairway to Heaven

Role Playing Games’ roots extend to before the advent of the digital medium. Before manipulating buttons to control characters on-screen, pencils were put to paper around the table, letting imaginations and a long list of rules to be memorized serve as many people’s entry to the concept. Due to their common tabletop origins, it makes sense that RPGs share at least a basic history with that of the collectible card game, another tabletop game where players use cards exclusively to interact with a particular set of rules. While not the first to attempt a melding of these two concepts, Slay the Spire is an absolute knockout of a devilishly simple concept that nevertheless merges the finesse of deck-building with the gripping strategy of a tightly-designed turn-based combat system, helped all the more by the desire to complete “just one more turn”.

Slay the Spire offers little in the way of storytelling, opting instead to head right into the action. There are token paragraphs dedicated to some menace sitting atop the titular spire, but nothing in the presentation offers anything more than a dialogue box to be skipped. Instead, the game immediately grants the player a choice of class — one initially, three in total — before plopping them in front of a talking whale and bringing them right to the game. The three classes all fit into the traditional RPG molds: the Ironclad is the beefy tank, the Silent is a slippery rogue, and the Defect a mechanized take on the magic-wielding mage. While the list of classes is one of the game’s few shortcomings, the amount of customization and variety found within each class more than makes up for what at first appears to be a slight list of character options. 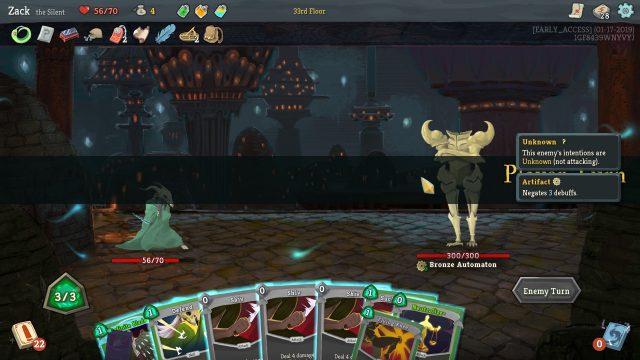 While playing as the Silent, shivs are plentiful.

To understand how the classes differentiate themselves, it is crucial to know the meat of the game. In Slay the Spire‘s combat, each round consists of an attack from the player followed by a retaliation from the opponents. The player’s actions are dictated by a deck of cards from which the character will draw a hand of five each turn. Cards are played from the hand using energy, which by default is three. The basic cards, Attack and Defend, either deal damage to a target or give a one turn protective shield for the amount listed. Helping the player to plan their turns are symbols hovering over each enemy indicating what action they will perform next. Players play cards from their hand until they run out of energy, run out of cards, or choose to end the turn prematurely. At the end of the character’s turn, the remainder of the hand is discarded and a new hand of five cards is drawn. When the character’s deck runs empty, the discard pile is shuffled and turned into a new deck from which to draw.

While basic in its implementation, Slay the Spire‘s combat quickly evolves into something far more engaging. Every monster defeated grants some gold to the player and the choice of one of three cards to add to the deck. These more advanced cards begin adding wrinkles to general strategies and open up many new possibilities. The three separate classes have their own separate pool of cards tailored to fit their play styles, but there are universal cards that can be obtained through events and shops. While the game lacks a traditional leveling mechanic, each card earned feels like a significant increase in power when decks are small. There’s a noticeable and satisfying difference when a new card is played as actions become more powerful. This doesn’t always manifest as a new, beefy Attack card, sometimes it’s combo enablers, like Skill cards that have the potential to set up powerful turns. Other times it’s Power cards, a separate kind of card that, once played, is removed from the deck for the remainder of the battle but provides a passive bonus throughout, such as dealing out damage whenever hit or automatically generating armor every turn. 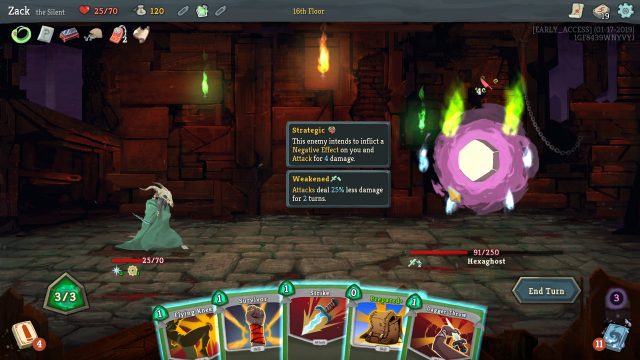 A prepared survivor strikes a dagger throw with a flying knee.

It’s not as though enemies are helpless, far from it. While the game does inform the player as to what to expect next, that doesn’t always mean the player’s hand will cooperate. And when enemies hit, they tend to hit hard. To help out against enemy encounters even more, players also earn relics throughout gameplay, special items that provide bonuses to the character. Each class starts with a distinct one to begin, but all Elite monsters, Boss monsters, and certain events drop a random relic. The effects of these relics vary tremendously — gain two energy every third time you shuffle your deck, reduce all damage dealt by enemies to one every sixth turn, gain two health at the beginning of each fight, etc. — but can also serve to help enable stronger strategies. As an effect of being a rogue-like, randomized game, it’s unfortunately impossible to build a strategy entirely around which relics you obtain, at least early on in a run. Later in a run there is a little more information to make informed decisions, but the random nature of what can be obtained is both a strength of the game’s replayability, while also serving as one of its disappointments.

This is never more apparent than with what constitutes dungeon-crawling in the game. Each Act of the game, four in total, features a series of connecting encounters. Players are given a starting point and the choice of where to go next out of six different options: Regular monsters, Elite monsters, random encounters, treasure chests, shops, or campfires. Random encounters — clued by a question mark — will usually provide a small event where players will be given the chance to gain assets in exchange for money or other setbacks. Treasure chests give random potions and possibly relics. Shops offer a selection of cards, relics, and potions for sale, as well as a service that permanently removes cards from the deck. Finally, campfires allow for players to rest and recover health or train to improve a card. While mapping a path through each Act is important and essential to a successful playthrough, the decisions don’t feel interesting. It’s such a minor aspect of the game that it doesn’t really hurt it, but with as much care as was put into the combat and deck-building, the dungeon aspect feels like an afterthought, something that was put in as a paste to hold the strengths of the game together. The run-based nature of the game also means that early on, when decks are as basic as possible, the game feels pretty repetitive. It’s a problem easily rectified by just playing more of the game, but the early fights and encounters tend to be pretty dull the umpteenth time through. 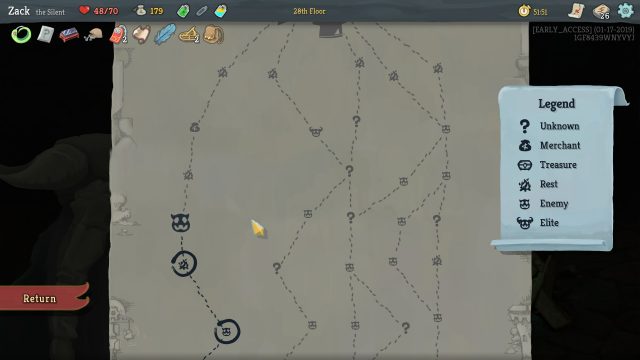 This is about the sum total for actual dungeon-crawling, a rare disappointment for the game.

The presentation of the game is merely adequate. The characters are only plainly animated and do not perform any differently based upon which cards are played. The game succeeds in not being visually distracting, which is a positive for a game like this as having all the information easily available and presentable is far more important. The art style doesn’t do anything particularly interesting, but some of the designs — each player class is distinctly silhouetted and some of the more involved monsters are evocatively weird — stand out. The music also trends towards serviceable, not really making any distinct impact while playing, but through sheer repetition can serve as an ear worm.

Perhaps the most affirming praise to offer Slay the Spire is that instead of writing about it, I would prefer to be playing it instead. The game has an addictive quality where all the little choices made can pay off in big ways down the road. The combat is straightforward enough for anyone to grasp while also offering incredible depth, and the simple act of deck-building is entertaining in and of itself. Where the game needs to exceed it does so by multiple degrees, more than enough to outweigh the minor quibbles it garners after hours of play. Any opportunity to even try the game should be greeted with enthusiastic expediency.