Ska Studios’ 2016 outing Salt and Sanctuary was an extremely competent 2D take on the Soulslike action RPG formula. Its recent follow-up, Salt and Sacrifice, begs the question of how close a sophomore effort should stick to the source material that originally inspired its predecessor and how much leeway it should get in forging a new(ish) path. At its core, the new title is more of the same engaging combat Ska Studios crafted six years ago, but its additional gameplay elements fail to gel with those tried-and-true ideas in satisfying ways.

Though the two games share many common elements, there are no direct connections between their characters or settings. Players take on the role of a Marked Inquisitor of the Altarstone Kingdom, a former criminal who chose to serve the crown in exchange for being pardoned. During the game’s opening scene, the Marked Inquisitor is sent to the far-flung reaches of the kingdom in order to hunt down and devour mages, wicked souls who have been twisted to evil by embracing unspeakable arcane powers. This hunt takes the Inquisitor all around the game’s five humongous zones, and while the moment-to-moment combat and exploration are engaging, the gameplay specifics inherent in hunting down mages are far less so.

Salt and Sacrifice doesn’t reinvent the wheel when it comes to how the Marked Inquisitor interacts with the world around them. Players are given an impressive array of options to customize a fighter to their tastes, with different classes offering melee, ranged, and magic builds. To fit with the game’s theme, players even have to choose which crime the Marked Inquisitor was convicted of, resulting in some slightly different loadout options in the process. As in the previous installment, defeating enemies nets players salt that can be spent on leveling up, while salt is dropped in case of death and lost forever should the Inquisitor die again before retrieving it. However, leveling up only increases the character’s hit points, while other upgrades like improved damage output, stat increases, and more potent healing are each handled via other dedicated systems. Overall, combat feels satisfying and fluid, with plenty of moving parts that mesh well together. 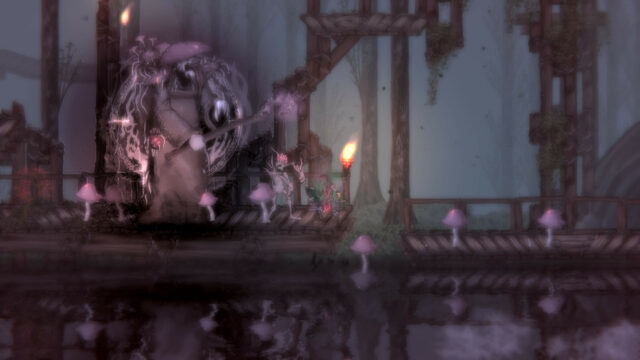 Challenging combat encounters have long since become a staple of the Soulslike subgenre, and Salt and Sacrifice certainly doesn’t pull its punches in this regard. Even basic enemies can overrun the player when encountered in groups, as dodging or blocking can only protect from so much damage before stamina runs out. Enemies come in a wide variety, each with its own difficulties that must be dealt with: some are armed to the teeth, others attack from afar; some are towering behemoths, while others are lithe and agile. There’s rarely such a thing as a toothless enemy encounter, though the late-game ramps up the challenge considerably.

Bosses throw a further spanner into the works. Beyond the game’s already high difficulty threshold, there’s almost a sort of dance inherent in learning each one’s moveset and how to best dodge their attacks and find a window for a reprisal. The Inquisitor’s dodge roll is a great way to avoid damage, particularly since it covers quite a bit of distance in a panther-like somersault to safety. To alleviate the irritation of frequent deaths, obelisks strewn around the world act as checkpoints to revive at after falling in battle, though ending the play session or returning to the hub area — which is necessary in order to level up and enhance equipment — means losing forward progress in an area and having to reenter it from its starting point.

Mitigating this somewhat are the shortcuts that masterfully link long winding sections of the maze-like areas back to earlier sections. Often, this is done by unlocking a door or descending a ladder only to be genuinely surprised that one has traveled a lengthy distance and still looped back to an earlier point. That said, the game is fairly linear, with each of the five zones becoming accessible via a teleportation gate in the hub world once the previous zone’s main objectives have been met. This enables Ska Studios to imbue the game with at least a modicum of narrative, though it does stay on the anemic end of the spectrum and won’t be anybody’s reason for sticking it out to the credits. The environments themselves add a bit of flavor to the storytelling as well, though how thoroughly each is explored is often up to the individual player. For example, the village that comprises the game’s first area is put in a new light during later optional revisits to the zone when the vertical traversal abilities unlocked by then reveal a grandiose castle awaiting exploration high up in the heavens above the village. 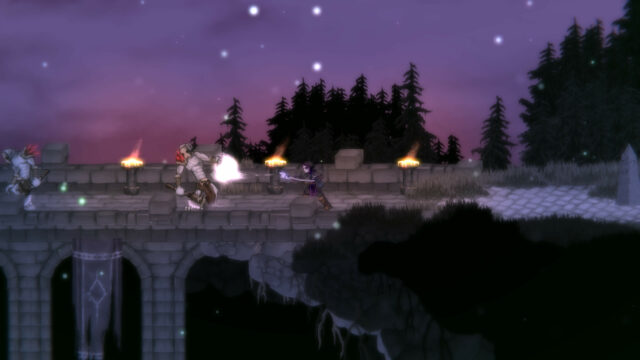 Dishing out the pain to foes is as fun and satisfying as ever.

Due to the linear path through the game, its critical path bosses are generally fairly well balanced. But this time around, that only makes for half of the equation. Each zone presents a number of mage hunts for the Marked Inquisitor to take on, pitting them against some of the game’s most powerful magic users and their minions. Though it isn’t necessary to hunt down every single mage (or even likely to happen, as each hunt must first be discovered, with some hidden away in hard-to-find locations), players won’t be able to fully abstain from this gameplay element, as progress is at times gated until a set amount of an area’s mage hearts have been devoured. More’s the pity, because the mage hunts are, on the whole, not one of the game’s finer innovations.

Since they’re quasi-optional, mage hunts must be accepted after being discovered. Once this has happened, players are pointed in the general direction of their quarry. Mages cannot be defeated when initially encountered, as they will teleport to a new location after taking enough damage. The process of tracking the mage all over the place, at times going back and forth, only to have it escape again may continue several times before players corner it in its intended boss arena, where it can finally be brought to justice.

However, accepting a mage hunt comes with a number of unwelcome additions. While a hunt is active, new enemies appear throughout the area, increasing the danger to the Inquisitor. The newly summoned mages don’t seem to be on friendly terms with the area’s other denizens, as any normal enemies present during these encounters will attack the mage on sight. In one noteworthy instance, two mages appeared side-by-side and took it upon themselves to kill each other while the Inquisitor stood safely at a distance and watched. Since they add little to the game’s lore and often result in simply retreading ground to engage in extra boss battles — some quite a bit more difficult than the main game — mage hunts quickly outstay their welcome, and discovering that the critical path forward is blocked until a certain number of mages have been defeated is soon met with annoyed resignation. 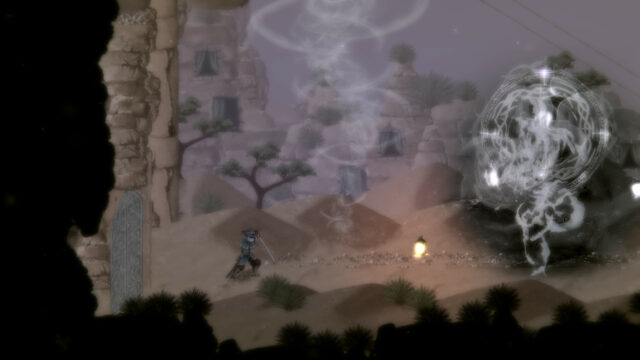 When allowed to simply spend time in each area to advance the sparse plot, players are treated to some satisfying exploration. This usually involves some form of platforming, making use of the arsenal of abilities unlocked over the course of the game. A grappling hook, zip lines, and revealing invisible platforms are among the tools of an Inquisitor’s trade, and add a fun wrinkle to the otherwise combat-heavy exploration. Revisiting past areas with new abilities is possible, but the designers didn’t overly lean on this optional gameplay element. There is a joy to exploring an area’s hidden nooks and crannies, and zones are large enough that revisiting them often results in new areas to discover, with hidden secrets and items galore. Some bosses and rare enemies require straying off the beaten path, and there’s even an entire hidden zone for dedicated players to find and explore. Hide-and-seek sidequests make a return, with NPCs who divulge snippets of their narrative each time the player manages to stumble across them in consecutive areas. While this method of story delivery is absolutely consistent with other examples of the genre, it is also very piecemeal and involves a good pinch of luck or being willing to consult a guide to even eke out what limited narrative there is.

Graphically, Salt and Sacrifice sticks close to its predecessor’s aesthetic. The hand-drawn characters and environment art are moody and, at times, appear blanched of color and vibrancy; there are no screaming neon or pastel color palettes here. That’s not to say they’re drab or dull; both indoor and outdoor locations are packed with detail and interesting things that catch the eye. Colors are subdued, often dominated by blues, blacks, and browns to keep the color temperature on the cool end of the spectrum. It may not push the graphical envelope, but the occasional boss design and some neat particle effects add an extra pop. Music is similarly in service of the overall somber atmosphere, heavy on tracks that blend into the background and create more of a string-based mystical soundscape than anything else, and is even punctuated at times with periods of musical silence. Some areas, like the hub world, and boss encounters feature dedicated themes, but nothing that particularly sticks in the ear.

Salt and Sacrifice is, by and large, a faithful continuation in the niche Ska Studios carved out for itself with Salt and Sanctuary. Nearly every element will be immediately familiar to those who’ve played its predecessor, with gameplay that sees all the common action RPG staples carried out admirably. However, it’s in its one novel concept, mage hunts, that it misses the mark a bit, as these add some frustrating pieces to the puzzle without really bringing anything worthwhile and unique to the formula. While it may clock in a bit below its predecessor in terms of overall package, main gameplay staples like combat and exploration continue to be of enjoyably high quality, and make this series’ second outing a worthwhile entry.