Adventures Across the Fourth Dimension

The original Radiant Historia came near the end of the DS’s lifespan, during a time when pirated game use was rampant and numerous worthy titles didn’t accrue the sales necessary to justify further corporate interest. Radiant Historia: Perfect Chronology is now coming in the latter years of the 3DS, but hopefully will be granted the sales attention its quality deserves. Seven years had made my memory of the original imperfect, but this new version does better than simply replicating what came before. The considerable new content makes it worth an examination by veterans while all those who missed it the first time have another chance now.

Stocke is a Special Intelligence operative in the Alistel armed forces tasked with escorting an informant out of a combat zone. The operation goes awry in every way possible, leaving Stocke’s mission a failure and his comrades-in-arms dead. Such dire circumstances propel Stocke into finding out that something passed along by his superior allows him to access a realm called Historia, where he is able to shift between nodes denoting specific events in time. Doing so is necessary not simply to resolve the ongoing war, but to find a way of undoing the desertification of the continent. This desertification is powerful enough to transform hale and hearty beings into sand, and its progress must be stopped to let any hope of survival remain. To accomplish this task, Stocke needs to switch between two primary timelines in order to remove various roadblocks to his progress.

Perfect Chronology has the same core narrative as the original game, which remains a fascinating depiction of a tantalizing place. It deals with topics not often seen in RPG narratives, doing a good job of fleshing out the roster so that they aren’t one-note personages. Creating a cast of characters and situations that can effectively simulate the conditions found in the real world isn’t something easily achieved, and Radiant Historia doesn’t reach that level of sophistication, but its achievement is nevertheless sizable. The unusual structure of the narrative allows for some interesting methods of divulging further facts, as Stocke jumps between the two timelines to see a wide range of possibilities around him. Plenty of dead ends are also present, depicting interesting ways in which the wrong choices result in an unhappy conclusion. These poor outcomes do not come with a Game Over screen, instead taking Stocke back to Historia to reassess what happened, so there is no time lost in seeing the unfortunate ways things can go wrong.

New to Perfect Chronology is a parallel timeline which operates a bit differently. In this portion Stocke is tasked with going through multiple vignettes that don’t combine to form a single narrative, but are instead quick depictions of different ways what has already been seen could also have gone. None of these branch out into truly radical multiverse theory, and their frequent brevity limits their effectiveness, but they are nevertheless interesting to behold. This additional content also expands on what was already a sizable title, providing plenty of content worthy of discovery. 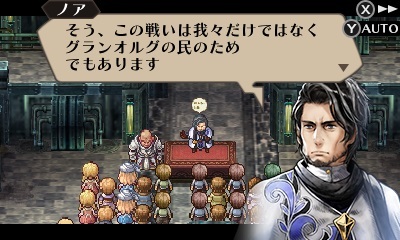 Not many people look this good in their 90s!

Visible opponents are seen frequently while traversing Radiant Historia‘s locales, and touching them initiates combat of a somewhat tactical nature. What makes these fights unique is the ability of the player to change turn order, letting the enemy get its attacks in first so that up to ten actions by the protagonists can be taken sequentially without interruption. Taking hits might not seem a wise move, but Radiant Historia emphasizes combo attacks that can only be pulled off if the enemies don’t get an action in the interim. Adversaries occupy spaces on a grid and can be knocked into each other with certain techniques, allowing further attacks to hit everything within a specific space. It is possible to slam all opponents together and have them simultaneously take damage from actions that normally would affect only one, but the effect is undone once an enemy turn comes up and the dogpile is dissolved. This encourages the player to take a few hits if possible, in order to set up a powerful combo that beats down the adversaries efficiently. The only change to Perfect Chronology finds characters not currently in battle able to randomly administer support moves instead of remaining completely on the sidelines, but this combat system was already strong enough to make it quite rewarding.

Traveling between timelines means Stocke’s available companions change often, but Perfect Chronology makes it possible to equip even those characters not currently in the party. This may not make sense from a temporal standpoint, but it does help the player keep everyone ready for action at all times. The interface is convenient and easy to use in other ways also, which is very handy considering how often Stocke jumps around in time. The handy use of the Start button to skip previously seen plot developments is incredibly welcome for minimizing the time wasted going through things again. Its one real issue comes when trying to pinpoint exactly where Stocke needs to go and whom to speak with in order to handle certain side quests, particularly a few of those in the new parallel histories. This is not too much of a problem simply proceeding through the core narrative, where the information provided is usually enough to let the player figure things out. Achieving everything possible will demand either going through locations with a fine toothed comb or consulting a FAQ, however.

Another addition to Perfect Chronology is substantial voice acting, which Atlus did a superb job localizing. All characters with a significant role have completely voiced parts, and the work put in by the cast is top-notch. This dialogue brings the cast to life in a way that text alone fails to accomplish, and the lion’s share of plot events are given stellar service. NPCs with smaller roles do not always have full voice work, and the use of a few clips that don’t fully match what is being said makes these infrequent contributions more dispensable. 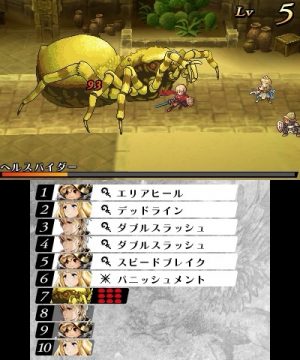 Quick, call in Clint Eastwood leading some fighter planes, they’ll know what to do!

Radiant Historia‘s structure means that the player will be traipsing through the same environments multiple times, which does get a little tiresome. Developers were thoughtful enough to revise what enemies are present and certain specific parts that can be accessed, but in a title that can last over fifty hours there will still be plenty of excursions to familiar locales. This is mitigated to an extent by the ability to whack most enemies out of the way instead of having to fight them once more. Still, getting accustomed to certain places is mandatory due to their multiple appearances.

Aside from new character artwork with multiple expressions, the visuals in the game haven’t changed much from 2011 on the DS. That’s not necessarily a bad thing since the sprites and environments are quite interesting to behold, but it does mean the 3DS’s capabilities aren’t pushed. Yoko Shimomura’s soundtrack remains atmospheric and evocative, though not many new compositions are on hand to complement the added content. Something that has been added is a difficulty selection at the game’s beginning, allowing players the option to cruise through most encounters or to experience a sizable challenge even from regular enemies, allowing for a range of play styles to be encompassed.

Plenty of experimental RPGs failed miserably in the attempt, but Radiant Historia is one of the success stories. It held my interest just as well now as when I played it on the DS, and experiencing the new content was quite enjoyable. Hopefully the audience it didn’t quite find in its initial release learns about it now, particularly the many outside North America who can now experience it without importing, and I give Atlus kudos for another top-notch title brought out of Japan.